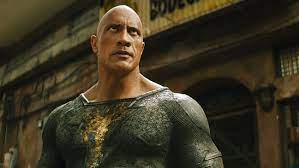 The question that “Black Adam” poses is a simple one: What happens when Hollywood’s most risk-averse movie star collides with Hollywood’s most risk-averse movie genre? The answer provided by Dwayne “The Rock” Johnson’s depressingly inevitable (and inevitably depressing) foray into the superhero-industrial complex is, of course, even simpler: Exactly what you’d expect. Only worse.

All due respect to whatever unique and illustrious history Black Adam may have developed since his DC Comics debut in 1945, but the lifeless spectacle that director Jaume Collet-Serra — who made some nifty thrillers before “Jungle Cruise” reduced him to the John Ford of Rawson Marshall Thurbers — has cobbled together for the character’s big screen origin story is so exhaustingly derivative of other superhero movies that the ancient Egyptian antihero might as well not have any history at all.

The problems stem from an irreconcilable mismatch between star and subject. Part of the issue is that playing the Scorpion King does not, in fact, make someone of Middle Eastern descent (even if they did it twice). The other major cause of the disconnect is that Johnson’s fatal allergy to bold creative choices makes his brand a hopeless fit for such a politically fraught blockbuster — the tale of a superpowered former slave who wakes up from a 5,000-year nap and chooses to resist the American “liberators” in his fictional, Iraq-coded country with extreme force. Later, they team up to fight what might be the single most forgettable villain in comic book movie history, which is a wild thing to say about a giant hell demon with a pentagram scar across its entire chest, or about a genre that once pitted the Hulk against… a slightly neckier version of the Hulk.

“Black Adam” so desperately wants to be a darker and gristlier version of the same hamburger that audiences have been served over and over again for the last 15 years, but Johnson — who’s also a producer on the film, and a part-time architect of this cinematic universe in addition to our own — can’t abide the idea of doing something that might leave even one audience member behind. He doesn’t have the stomach to make Black Adam much of an antihero, let alone a bad guy (the character is workshopping catchphrases within a few scenes of waking up, and has a habit of disappearing from sight whenever things get complicated).

And so Johnson has made a decidedly PG-13 movie that lacks the imagination to take anyone with it. There isn’t a single character here that doesn’t feel like a cheap photocopy of one from Gotham or the MCU, not a single beat that doesn’t feel like it hasn’t been audience-tested within an inch of its life, not a single fight scene that isn’t smothered to death by the DCEU’s signature CGI gloop. “The superhero-industrial complex is worth a lot of money,” a character whose name I’ve already forgotten observes at one point, and “Black Adam” becomes a part of that business with all the fun and enthusiasm of a hedge fund buying $200 million worth of blue chip stocks.

That’s a shame, because Johnson remains one of the most enormously charismatic (and charismatically enormous) movie stars on Earth. And while “Black Adam” may not have been the best fit for his particular ethos or ethnicity, there’s oodles of potential in the idea of a mega-budget Hollywood superhero movie that centers Middle Eastern characters and/or reflects upon the legacy of Western imperialism in a way that Marvel films only pretend to.

At first, Rory Haines, Sohrab Noshirvani, and Adam Sztykiel’s script appears intent on doing that, even if retconning Egypt into the fictional country of Kahndaq — a precedent first set by David Goyer and Geoff Johns’ run of “JSA” comics — strips the film’s setting of valuable context and urgency. A Wakandian prologue set in 2600 B.C.E. introduces us to a magical ore called Eternium, and also to a young slave who impresses the wizards from “Shazam!” by rebelling against his king; those guys are always on the lookout for a hero worthy of their god-like powers, but their vetting process could probably stand to be a little bit more rigorous, given the consequences.

A safer candidate doesn’t skateboard into the picture until a few millennia later, when the story picks up with a puckish, comics-obsessed tween named Amon (Bodhi Sabongui) in present-day Shiruta, the capital city of Khandaq and home to the roundabout where 80 percent of this strangely confined movie takes place. While Amon spends his days messing with the white military types who police his people, his resistance fighter mom Adrianna (Sarah Shahi) searches the ruins outside of town for… I’m not quite sure. Is she trying to reawaken the mythical hero Teth-Adam, or is she hoping to find the same demonically infused Eternium crown that Teth-Adam’s king once sought all those years ago? It doesn’t really matter, because she does both.

Bringing Teth-Adam back from his coma pisses off Viola Davis’ Amanda Waller, a character who always seems as annoyed to be in these movies as some of us are about having to watch them; she dispatches the Justice Society of America to get him under control, because there’s nothing DCEU movies love more than assembling a team of people that general audiences have never heard of and couldn’t possibly care about.

Intergang’s narrative purpose is to supply bad guy Ishmael Gregor (Marwan Kenzari) with some disposable goons, and Teth-Adam with some white targets who are unaffiliated with the American military. He slaughters them with a style and relish that skews more toward Zack Snyder than Kevin Feige — more towards speed-ramped carnage than colorful gymnastics, more towards vengeful power than winking heroism — but the character’s edges are completely sanded off the moment he forms a paternalistic alliance with Amon and his family (a group that also includes Palestinian-American stand-up Mohammed Amer as Adrianna’s brother, who manages to rescue a few solid laughs from a movie that keeps tripping over its comic beats).

Despite how their relationship should trigger certain resonances from Teth-Adam, the ancient’s bond with Amon never cuts any deeper than a running joke about sarcasm that feels even older than he is. Touching as it should be that Amon is so desperate for a hero, it’s also odd that a kid whose bedroom walls are plastered with DC merchandise wouldn’t be more excited about having a meta-human of his own. But don’t get too comfortable, because that oddness is soon replaced by an even more bizarre sense of irony when an entire phase’s worth of knock-off Marvel characters drop into Amon’s backyard.

I don’t care that Doctor Fate was created long before Doctor Strange was even a twinkle in Steve Ditko’s eye, only that Benedict Cumberbatch has cornered the market on goateed and dry-witted psychic wizards to the point that Pierce Brosnan’s performance here seems like nothing more than some very expensive cosplay (the fact that most of his screen time is spent yelling the word “Sabbac!” doesn’t help). Noah Centineo’s guileless Atom-Smasher is cute enough, but his take on the character has so clearly been recycled from Tom Holland’s innocent Spider-Man and Mark Ruffalo’s shaggy Hulk that the character’s explicit Jewishness becomes his only “original” detail (another reason why returning Teth-Adam to his roots as an Egyptian slave might have been a more rewarding choice). He gets to make a lot of googly eyes at Quintessa Swindell’s Cyclone — essentially just a glitzier Storm — and the compelling “Master Gardener” star gets to make them back. That’s their entire character.

Most disappointing of all might be Aldis Hodge’s Hawkman, whose golden-winged costume brings some awesome “Stargate” energy to the most banal of hero archetypes. All told, the JSA doesn’t feel like the next generation of the Justice League so much as it does the DCEU’s farm team, and the minor-league scraps they get into on the streets of Shiruta do nothing to suggest otherwise.

Collet-Serra may have traded in his B-movie bonafides for beefier corporate paychecks, but last year’s clumsy “Jungle Cruise” still found him sneaking a few genuine thrills into a film adapted from a Disney theme park ride. Alas, even that meager dose of ambition has been snuffed out from him here, as virtually nothing about “Black Adam” — from its muddled fight scenes to its painful needle drops — suggests any kind of creative vision behind the camera (“Paint it Black” is practically Tarantino-esque compared to the bit where Kanye West’s “Power” is shoehorned into the mix for 20 seconds). The only moment with any pronounced style is a direct homage to Sergio Leone, which also works because Johnson is at his most comfortable making hard faces at the camera and flexing his eyebrows in extreme close-up. Grappling with several millennia worth of grief or arguing for the self-governance of his people… not so much.

The problem isn’t that Johnson can’t act — he definitely can! — the problem is that he doesn’t want to. He still wants the simple idolatry that a kid might have for their favorite athlete. He wants to be larger than life. But even the biggest of movie stars need to be a little smaller than that in order to give people something to watch, and not just look up to. “Force is always necessary,” Teth-Adam insists, and it’s refreshing that “Black Adam” doesn’t talk him down from that. But risk is always necessary, too; for heroes, yes, but even more so for anyone who’s supposedly willing to be something more complicated than that.