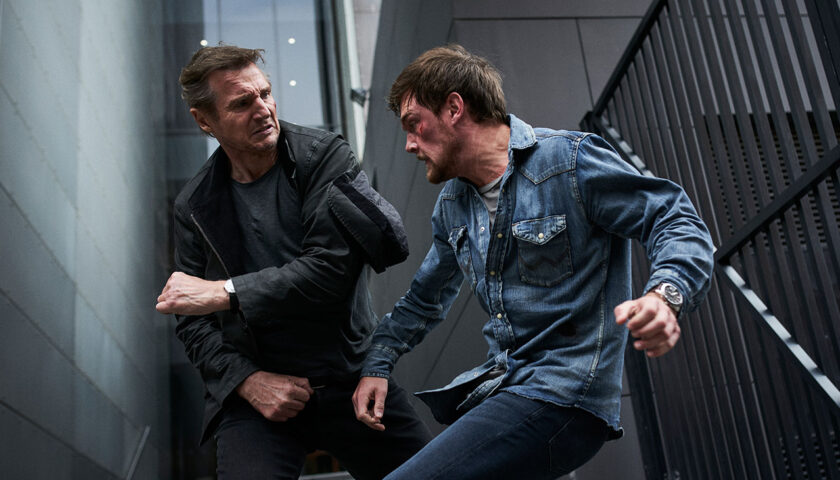 Since “Taken” in 2008, Liam Neeson has starred in so many movies where he plays a character who protects, rescues, mourns, or avenges his family that it seems somewhat pointless to invest deeply enough in the latest to care whether it’s better than its predecessors, much less if it’s individually good or bad.

Directed, produced, and cowritten by Mark Williams (Neeson’s 2020 film “Honest Thief”), “Blacklight” is an unsurprisingly tepid action thriller which extends this odd phase of Neeson’s career, but the best thing that can probably be said about it is that it’s not materially worse than most of the others.

Williams coaches Neeson through another of the actor’s increasingly familiar gruff-but-sensitive performances while telling the story of the kind of black-bag man whose simultaneous political obsolescence and extrajudicial necessity movies like this too frequently want to explore without possessing the narrative or intellectual sophistication to do so with any real nuance or complexity.

Neeson plays Travis Block, a MacGyver-like enforcer and fixer working at the behest of FBI director Gabriel Robinson (Aidan Quinn) to solve problems that ordinary law enforcement (much less proper legal channels) cannot. When a protégé of his named Dusty Crane (Taylor John Smith, “Hunter Killer”) gets picked up by the police for sitting in front the workplace of journalist Mira Jones (Emmy Raver-Lampman, “The Umbrella Academy”) with a bottle of pills and a handgun in his passenger seat, Block intervenes on his behalf and promises to get him some help. Before he can do so, however, the inconsolable young man escapes Block’s custody and tries to give Jones information about what he claims is a secret FBI program that involves the murder of innocent citizens.

Block, who is eyeing his departure from the agency in order to repair his relationship with his daughter Amanda (Claire van der Boom, “Hawaii Five-0”) and granddaughter Natalie (Gabriella Sengos), is doubtful of Dusty’s claims, as much as anything out of obligation to Robinson for protecting him in the past for an accidental murder he committed during his youth. But when he witnesses firsthand the pair of assassins that Dusty claimed were after him, Block decides to look a little closer into his boss and former comrade’s off-the-books activities.

After Robinson tries to scare him off of asking too many questions, Block realizes that he cannot stop pursuing Dusty’s claims until he discovers the truth, even if it means that Robinson tries to use Block’s family against him. In the meantime, he connects with Mira Jones himself as she searches for her own answers, leading the two of them to decide if it’s worth their lives to expose what appears to be a government conspiracy

Looking at the introduction of Travis Block, you get the sense that the filmmakers have agreed that Neeson’s presence alone is sufficient, and so they won’t make him do too much work; the sequence is meant to depict a tense standoff between two deputies and a mob of white supremacists over an undercover agent who infiltrated the supremacists’ riverside community, but while everyone else argues in front of the camper where the agent is hiding, Neeson walks to the back, engages in a protracted conversation with the agent and sets up an explosive distraction before driving away in a roaring, polished Mustang.

Giving credit where it’s due, as a longtime Neeson fan, the actor hasn’t followed in Bruce Willis’ footsteps and fully given up on acting for anything other than his paycheck, but it would be tough to argue successfully that he’s working very hard in a role like this, though he goes through the motions with almost enough conviction for you to believe he thinks audiences care about anything in this context other than the violence and mayhem he creates.

As Dusty, Taylor John Smith feels like a dime-store Dan Stevens, hunky and more than a little bit haunted, but the way that his action scenes are staged suggest that his character — who wrestles with his complicity in the FBI’s secret program — wants to inflict maximum pain upon anyone in his way, even the minimum-wage security guards at an automotive museum where he meets with Mira Jones. More strange is the eventual discovery that the program in question is not some sort of “Manchurian Candidate” situation where agents are trained to dispense of their humanity, just a secret operation where undercover agents keep tabs on Alexandra Ocasio-Cortez–like populist rabble-rousers and, when necessary, eliminate them.

Similarly, while the writing for Jones thankfully avoids the broader and more insidious movie clichés about reporters, her scruffy determination to expose the truth settles into a less irritating but no less familiar character type, even as her two editors seem less interested in investigative journalism than anyone I’ve ever met in a newsroom, at one point telling her, “playing detective is not going to solve anything.” At the same time, her more or less instant belief and trust of Neeson’s Block offers a poor juxtaposition to the skepticism that causes her to fixate on breaking Dusty’s story.

Then again, the movie also can’t decide whether a person like Block with a “certain set of skills” and the will to use them is a poisonous representation of government secrecy and overreach, or an essential counterbalance to the bureaucratic villainy that Quinn’s Robinson embodies.

Outside of Block’s journey to discover “if he’s doing bad things no one knows about, then probably his boss is getting other people to do worse things,” Williams’ staging of the man-to-man action as well as a couple of car-chase scenes has a perfunctory technical prowess that highlights the availability of enough resources to get public spaces like parks and freeways closed for shooting but nothing left over (monetarily or creatively) to fill in the backgrounds with other cars or passersby.

As a result, a movie like “Blacklight” feels like a vivid reminder that actors really are just playing around and shouting “pew-pew” at each other; truly gifted performers and filmmakers can convince us that what they are doing and what they are examining is worth caring about, but when even they don’t seem especially invested in creating a believable reality, then the end result becomes all disbelief and no suspension.