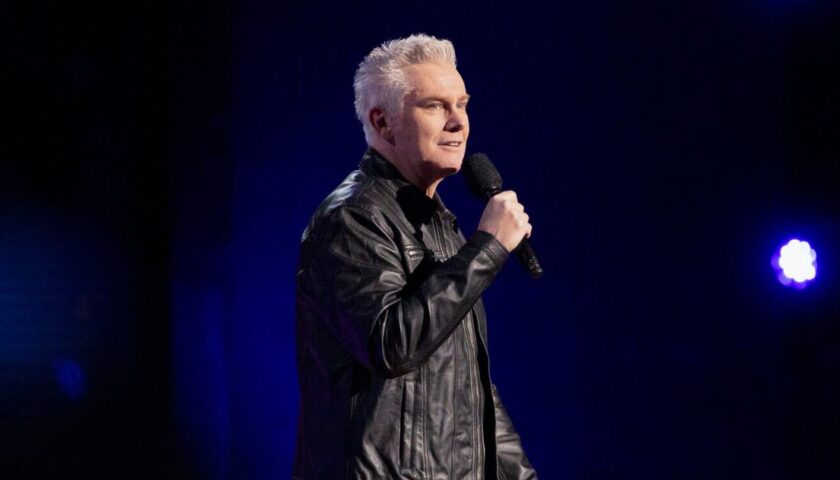 Brian Regan’s new Netflix special On the Rocks, taped in October 2020,is not about COVID. At all. It’s not about COVID or the experience of living through 2020 or Trump or climate change, and it’s also not about cancel culture or pronouns or race or money. Filmed in an outdoor arena filled with a huge, mask-wearing audience, Regan’s special is an hour that attempts to travel to another time and place entirely. He tells sturdy, economical jokes with a minimum of unnecessary bulk. He pulls faces, mostly to point out that the person he’s building the joke about is stupid or boring. He throws in neat, efficient loops back to earlier stretches of material, little bits of returning joke spurs that create a neat, taut pattern. It’s a writing style that’s orderly and functional, not smug.

Taken together, Regan’s ahistorical material, his closed-system jokes, and his big silly faces come together with a special that his audience might respond to in two different ways. It’s like a hermetically sealed world apart from the one we’re currently living in, something I’m sure lots of people want. Who wants to be reminded of why this whole thing takes place at an outdoor arena? Who wants to think about why the few audience shots are full of people wearing masks? Of the few comedy specials released over the last year, most have woven COVID into the jokes at least a little. Kevin Hart talks about how he got COVID fairly early in the pandemic; other specials like Sam Morril’s and Ted Alexandro’s acknowledge it as much through venue as content. Regan’s proposal, though, is that we’d all prefer to ignore it. He praises the beauty of the venue without saying anything else about why the special’s filmed there. His one tiny reference to the general state of the world is to point out his new gray hair. “COVID hit, I went into hibernation, and came out a senior citizen,” he says, before swiftly moving on to a section about his discomfort with the hair-color aisle.

The implication of that line is that COVID is a thing that happened, and has now ended. He went into hibernation, and has now come out, a grayer person and an older person, but otherwise unchanged. It’s a jump start to a whole long stretch of jokes about his age, his health, and the fact that getting older means going to endless specialists. You can imagine that kind of material taking a turn for the bleak. It’s full of hovering-over-the-grave imagery — at one point Regan describes a grim pharmacy purchase of Lotrimin, a hand mirror, and a spatula.

But he takes it a different way, pulling the alarming march of specialists away from himself and toward a much goofier angle. “In the human world there’s a doctor for every body part, but in the animal world, a veterinarian takes care of all the animals … and all their parts?” he says, incredulously. Then comes the big, fun goofy capper. “Where are the bighorn sheep knee doctors? The wildebeest gastroenterologists? The giraffe throat, throat, and throat doctors?” He pauses; it’s a clap-and-whistle line.

It’s the kind of move Regan pulls repeatedly throughout the hour. He skims near a few potentially dark territory topics like his own OCD diagnosis or online comment culture. Then he pulls on the reins and swerves, turning his OCD into a way of coping with boring parties, and abandoning the deeper ideas about online culture altogether. Regan’s more comfortable with the lighter stuff. He lingers for a long time on pit orchestras — why is it called a pit? Why do they have to dress up to go down into a pit? Why are they allowed to still practice when the house doors are open? He gets very slow and very animated in a joke about raisins. Animals are a rich vein for him. A woman (an idiot, it’s clear by how he performs her) insists that animals are smarter than people, and Regan takes some delight in how stupid he finds that idea.

The least escapist moment of the whole thing, and my favorite joke of the hour, is Regan’s hilarious descent into what happens in his own head as he attempts to organize a bookshelf, the ins and outs of his obsessive need to control each book’s placement according to when he read it last, while accounting for the fact that reading the title of the book for organizational purposes could constitute “reading the book” and thus immediately throw off the entire system. Material does not need to be personal; it doesn’t need to be topical either. I can’t deny the appeal of the gloriously stupid “giraffe throat, throat, and throat doctors.” But it’s telling how Regan’s rhythm changes in that joke, how he abandons the big exaggeration of I think this person is dumb and lands in a careful, measured accounting of precisely how his brain falls into this spiral of obsessive thinking. The straightness of his delivery is set against what he knows is the over-the-top absurdity of his thought process. They balance each other well.

That’s a relatively rare moment of insight in an otherwise straightforwardly escapist hour. And there’s no doubt some appeal in that approach. Why not laugh about tubas in a marching band? Why not take a short leave of absence from everything else and sit together in this open-air arena, surrounded by towering red rocks that seem to shelter this space from the rest of the world? The title of the special, On the Rocks, is a similar form of shelter. It turns the mountain location into a joke about drinking, so your brain has a place to go other than This is outdoors because of a pandemic.

Except, this isn’t an hour that was produced in a magical place beyond the dire circumstances of the rest of the world. Sure, this performance for this one special may have been relatively safe. But in order to get ready for this one performance, Regan spent much of 2020 touring, headlining at clubs across the country, and posing maskless with fans in tight indoor spaces. It’s an escapist hour produced in a way that could not escape the most obvious end result: Regan was diagnosed with COVID in December. Maybe he didn’t infect anyone; maybe his performances from around the country this year didn’t result in any dire outcomes for his fans, the comedy club managers, the waiters, his support staff. Or maybe they did! Regan has recovered from COVID, and we don’t know.

The experience of watching such a deliberately escapist comedy special is harder to enter into when its creator made the special by attempting (and failing) to ignore reality. Escapism is a luxury Regan is clearly hoping to gift his audience. Luxuries have a cost, though. I’m not sure if On the Rocks is worth the price.