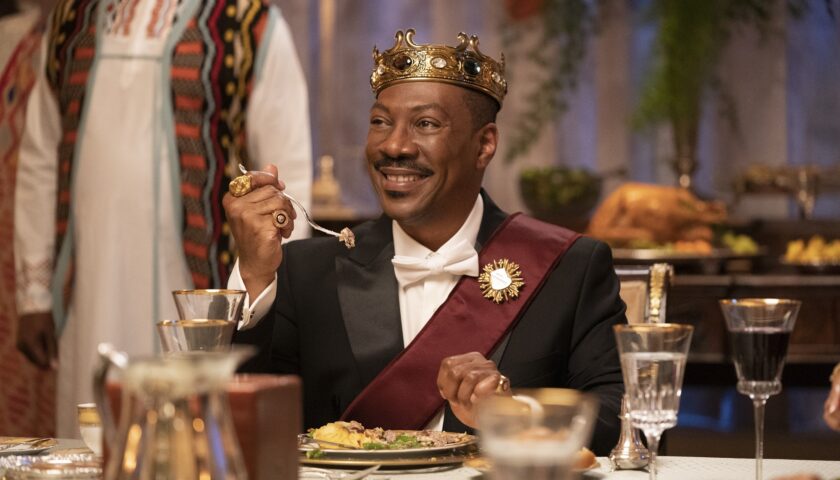 It’s hard to imagine what someone who hasn’t seen the original Coming to America — which, let’s not forget, came out 33 years ago — would make of its sequel. It’s been more than a few years since Hollywood’s obsession with franchising everything prompted the industry to start reaching back to the dormant legacies of titles from the 1980s and ’90s. But at least new films like Mad Max: Fury Road and Jumanji: Welcome to the Jungle attempt to reinvent and redefine (I am trying very hard not to say “reboot”) their stories and characters for the current moment.

Coming 2 America, which premieres on Amazon Prime Video this week, by contrast, practically demands encyclopedic recall of the original; it exists mainly as a vessel to reunite characters and redo classic bits from the first Coming to America (which, by the way, is also currently and conveniently available on Amazon Prime Video). That’s kind of the key to the new film’s rickety charm, even if that also means it’s doomed to live forever in the shadow of its megasuccessful original.

Reclaiming the spirit of the first Coming to America might not be as simple as it sounds. Back in 1988, Eddie Murphy was probably the biggest comedy star on the planet, and a lot of his most successful stand-up from that era has dated so preposterously that it could now be its own meta-humor bit. Coming to America was never as raw as, say, Eddie Murphy Raw, of course, but watching the new movie’s opening scene of a now-middle-aged Prince Akeem of Zamunda (Murphy) and his wife Lisa (Shari Headley) being awakened by their three daughters wishing them a happy anniversary, one is reminded that in the original, it was a very single Prince Akeem being awakened by his three naked, beautiful female attendants on the morning of his 21st birthday. It’s not just that things have changed. It’s that the new scene has been shot and cut to echo the original scene, so it only really works if we are aware of how much things have changed; otherwise we might wonder why this new film is dwelling so awkwardly on each daughter politely saying, “Good morning, mother and father” to their parents.

The story of the sequel also directly relates to that earlier trip Prince Akeem and his close friend and adviser Semmi (Arsenio Hall) took to the U.S. lo these many years ago. Akeem needs a male heir to inherit his throne, or his kingdom will be in danger of falling into the hands of a strongman, General Izzi (a terrific Wesley Snipes), the preening, strutting, kilt-wearing warlord of neighboring Nextdoria who spends his free time reading storybooks to his army of child soldiers. (Izzi’s sister was betrothed to Akeem in Coming to America, and she’s still barking like a dog — another hilarious throwaway bit that will make literally zero sense to anyone who hasn’t seen the first film fairly recently.) Akeem, who only has daughters, discovers that he actually has a son, Lavelle (Jermaine Fowler), whom he fathered out-of-wedlock back in New York during a zonked-out, half-remembered (and quite possibly nonconsensual on his part, which may understandably raise some eyebrows) coupling with party girl Mary (Leslie Jones). So, naturally, he and Semmi head back to New York to find the young man and bring him back to Zamunda to take his place as first in line to the throne.

In other words, Coming 2 America is both figuratively and literally a nostalgia tour. Akeem and Semmi land in the same Queens neighborhood as before, and of course it has gentrified beyond belief — save for the still-standing, still-decrepit My-T-Sharp barbershop, still populated with its trio of politically incorrect, motormouth barbers Mr. Clarence (also Murphy), Morris (also Hall), and Sweets (longtime Murphy collaborator Clint Smith), as well as their eternal customer, Saul (also Murphy). One might imagine that Murphy, Hall, and their team would try to tiptoe through a minefield of potentially problematic humor here, but no, they sort of gleefully step on all the mines. The barbershop greets Akeem and Semmi with a hearty “Hey, it’s Kunta Kinte and Ebola!” and follows that up with “Famine and Blood Diamond!” and “Nelson Mandela and Winnie!” Whereupon a random customer chimes in with “Those hungry babies with the flies on their faces!” and suddenly everyone goes stone-faced. “You talk that kind of shit about the hungry babies, you better get out of my chair,” Mr. Clarence says, and promptly kicks the guy out. These gabby old men may be out of touch, but even they have their limits.

The jokes, in other words, are the joke here. It’s a clever way to carve out some room — a safe space, if you will — for this type of humor, a way to indulge it while acknowledging that you know it’s not entirely kosher anymore. (That the creative team here, including director Craig Brewer, is part of the same group that somehow successfully navigatedDolemite Is My Name, a cheerful, winning biopic about infamously foul-mouthed and controversial insult comic Rudy Ray Moore, shouldn’t be lost on us.) It feels as if Murphy has heard all the people out in the world arguing that “you can’t make comedies about X anymore” and has been thinking to himself, Well, can’t I?

All this is not to say that Coming 2 America is some sleazebag edgelord fantasy of politically unacceptable humor. In truth, it’s too leisurely and raggedly good-natured for that, more pageant than movie. Akeem was already a straight man in the first film — Murphy generally saved his best gags for the other characters he played — but he completely drifts through this one, letting his reaction shots do what little heavy-lifting is required. A decent chunk of the picture is given over to musical numbers, some from veteran acts like Salt-N-Pepa, Gladys Knight, and En Vogue. As for the story, eventually we get Lavelle and his mom Mary’s fish-out-of-water journey in the royal circles of Zamunda, where they make faux pas after faux pas and where Lavelle winds up with a romantic dilemma that mirrors Akeem’s from the original: He’s supposed to marry Izzi’s daughter (Teyana Taylor) for the good of the kingdom, but falls instead for his royal barber (South African star Nomzamo Mbatha). Again, it doesn’t feel like the filmmakers wrote a new script so much as they just … rewrote the old script.

The best new things in Coming 2 America are also, weirdly, the worst new things in Coming 2 America. Snipes’s flamboyant warlord pretty much steals the show (much as his pretentious director character stole Dolemite), but the show doesn’t steal him back. Izzi is given almost nothing to do except show up, sneer a few threats, and then disappear. Admittedly, he does all this fabulously, but his presence feels clipped: The script actually seems to be setting up a bigger, more villainous role for him. A late-breaking attempt to give him more to do narratively is immediately snuffed out, as if the production realized it didn’t really have the time or the money for a whole new subplot. Similarly, Tracy Morgan, playing Lavelle’s hustler uncle, gets a few errant wisecracks and gets to emcee one final ceremony, but that’s about it. Until you realize that in the world of Coming 2 America, that’s pretty much all anyone is asked to do.