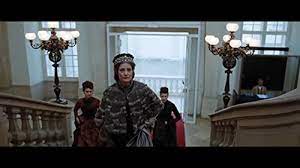 The Empress is unimpressed. Introduced to us at the beginning of Marie Kreutzer’s sneaky and terrific Un Certain Regard premiere “Corsage,” submerged in a bathtub during one of her many self-imposed endurance training rituals, Duchess Elisabeth Amalie Eugenie in Bavaria, Empress of Austria and Queen of Hungary, is holding her breath underwater for as long as she can. When she surfaces, the two nervous palace maids tasked with timing her cannot agree on the count, but even if they could, she would doubtless be dissatisfied. It is Vienna in 1877, Elisabeth is turning 40 and dissatisfaction — with herself, her political role, and a public image as restrictive as her whalebone undergarments — is fast becoming her default mode.

Even in repose, impatience rises off her like the smoke from one of her frequent cigarettes. She frowns at her reflection and has tetchy, bitten-off conversations with her stiff, remote husband, Emperor Franz Joseph (Florian Teichtmeister). She barks at servants who aren’t merciless enough in ensuring her bodice — corsage in French — is cinched so waspishly she could practically snap in two at the waist. She obsessively records her weight and measurements, burns off some of her excess nervous energy with gruelling bouts of gymnastics, horse-riding and fencing, and adheres to a strict diet of self-denial and thinly sliced oranges. In a standard biopic these factors (many of which, especially the more outlandish, are culled from the historical record) would make for a straightforward tragedy about the sufferings of very famous, very lonely women.

But as imagined by writer-director Kreutzer, photographed by Judith Kaufmann’s teasing camera and embodied by a sly Vicky Krieps — in the best showcase for her defiantly peculiar charisma since “Phantom Thread” — “Corsage” is instead a witty subversion of biopic and costume-drama clichés. Full of odd glitches and deliberate flubs in period detail, the film feels like an invitation into a secret conspiracy to reach back through time and, with deft, irreverent 21st-century fingers, loosen the stays on Empress Elisabeth’s corsetry just a little.

Standing in the way, of course, is all the posthumous image-making. The Viennese cottage industry of Elisabeth-themed coffee mugs and tourist bric-a-brac is rivalled only by Mozart’s, and the sappy, kitschy Romy Schneider “Sissi” movies, with their infantilized, apple-cheeked vision of Empress Elisabeth (aka Sissi), remain phenomenally popular across continental Europe even today. The trilogy made a star of Schneider, but she spent much of the rest of her career chafing against its cornball wholesomeness. Like the Empress herself, the actor became ensnared in the trap of the Sissi legend.

It is hard to imagine the same fate befalling Krieps, and not just because “Corsage” is an infinitely better movie than, say, 1958’s “Sissi: Fateful Years of an Empress,” the trilogy’s final installment, which romanticizes this same period in the Empress’ life to a fine schmaltz. (As it happens, it too premiered in Cannes.) It’s also due the unusual level of freedom Kreutzer’s airy act of retroactive female emancipation gives to Krieps, to rummage around in history’s treasure chest, and rather than losing herself to an inevitably inaccurate idea of a historical person, instead to imagine herself, a modern woman, inside the Empress’ clothes and hairstyles and predicaments. It all but upends the usual hierarchy between character and performer. We’ve heard of actors disappearing into roles before, but rarely does a role so disappear into an actor, and become all the stronger, more subversive and persuasive for it.

So if many of the episodes “Corsage” tracks — from her restless European wanderings to her eating disorder and heroin use — belong to a woman long dead, Krieps’ secret smiles and sudden outbursts of inappropriate laughter, her mercurial moods and the judge-me-if-you-dare challenge encoded in her gaze, bring her thrillingly back to life. Martin Reiter’s savvy production design embellishes the spiky, contemporary feel with atemporal flourishes: the Empress and her retinue walking in hooped skirts and livery through an unmistakably modern doorway; Krieps hurrying from a lushly upholstered palace bedroom through a hallway with bare, poured-concrete walls.

The soundtrack, too, colludes. The patriotic anthems and orchestral Viennese waltzes we might expect in a film about a 19th-century royal European court jostle with oddly moving covers of Kris Kristofferson’s “Help Me Make It Through The Night” and Marianne Faithfull’s “As Tears Go By.” These anachronisms are not as pronounced, nor as self-consciously hip, as the sneakers-and-Sex-Pistols vibe of Sofia Coppola’s “Marie Antoinette,” and the drama is less archly melodramatic than in the other nearest comparison point, Pablo Larraín’s “Spencer.” But then Kreutzer and Krieps (the executive producer and originator of the idea) are less interested in wholesale reimagining of history than in prodding at it here and there, to see if it will give a troubled, hamstrung woman a second chance.

To that end, the most audacious gambit in Kreutzer’s screenplay is the gradual departure from recorded history in the final act. This allows her to imagine a deliciously devious, fictional finale for her newly revivified heroine, one that cleverly circumvents the tawdry drama of the real Empress’ 1898 assassination at the hands of an Italian anarchist. It’s here we finally understand that “Corsage” is not as big a departure for Kreutzer as it might at first appear. Her excellent 2019 Berlinale psychodrama “The Ground Beneath My Feet” and her 2016 generational-snapshot comedy “We Used To Be Cool” (which also starred Krieps) may be contemporary films not based on the biographies of the exceptionally famous, but they also deal with women finding a way out of the trap that exists between the vibrantly weird, driven people they are and the straitjacketing societal expectation of who they ought to be.

In vividly imagining Elisabeth as one of these women, Krieps and Kreutzer work to reverse a process of self-erasure the Empress herself initiated when she retreated behind a heavy veil, refused to be photographed and kept cinching that waistline of hers ever tighter, as though to physically reduce her presence in the world. Hero-worship love for an icon as enduringly popular as Elisabeth/Sissi can become its own prison, but the handsome, mischievous “Corsage” displays a different, if no less passionate affection for the woman struggling to breathe inside the corset — the kind of love that sets her free.