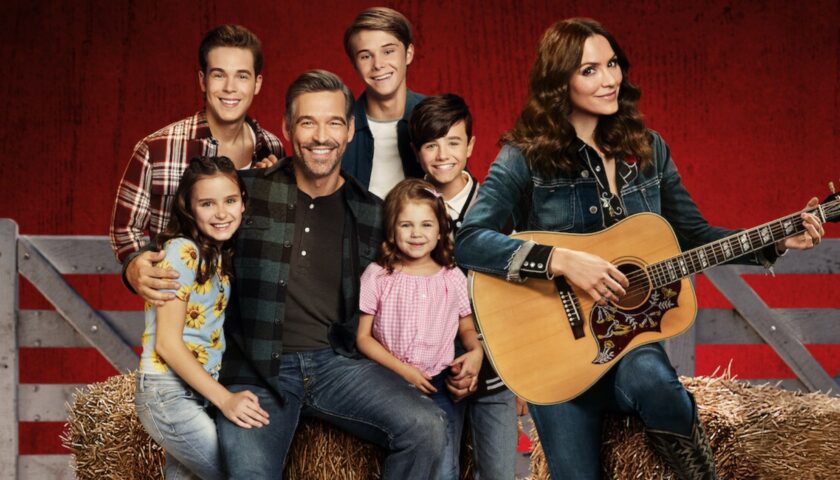 On the ‘90s sitcom “The Nanny,” Fran Drescher’s flighty character ends up becoming a childcare provider for a single father (Charles Shaughnessy) after she shows up on his doorstep bereft, having been recently dumped. Though she was an unorthodox choice for a sitter, the show’s theme song reminds us, she had a few things going for her: “She had style, she had flair, she was there.”

Subtract the style and flair and you have “Country Comfort,” a show about a person hired to care for children simply because she was there — and a show that seems to exist on Netflix only because it was there as well. Created by Caryn Lucas, an executive producer on “The Nanny” as well as the writer of “Miss Congeniality,” the show lacks any real signature other than a put-on, gaudy raunchiness that seems likely to alienate families with young children — who might have seemed the likeliest to put up with this show’s vacuousness.

Here, Katharine McPhee plays the new nanny, showing up on the doorstep of a widower’s homestead. Beau (Eddie Cibrian) soon enough hires McPhee’s Bailey, an aspiring singer, to care for his five children, a process that has its ups (Bailey helps the most sullen of Beau’s children overcome the worst of her grief around the loss of her late mom) and downs (Bailey loses Mom’s guitar!). The structure of the show would seem to suggest that the pair are meant to find each other — why else would Beau tolerate Bailey’s bumbling, and her lack of charisma? But the pair seem perpetually drawn apart — Beau to his snooty girlfriend (Janet Varney) and Bailey to the onetime singing partner who dumped her (Eric Balfour). When the plot machinations calm down enough to get Bailey and Beau alone in a room together, they have little even to say to one another, and the performances, delivered with a let’s-just-get-this-over-with tone, don’t help.

Bailey is inept at nannying in a manner that one hesitates to call comical, because the jokes it generates aren’t really that funny. McPhee is an uneasy comic lead and Cibrian — with whom she’s supposed to share a sparky chemistry, otherwise the show won’t work — feels checked-out from the first. This forces the kids to do the heavy lifting, and there is an uneasy adult wit burbling under lines written for minor and in some cases quite young characters. In one scene, the family’s second-youngest child tells her brother that she wants to “get out of these clothes”; her brother, seeking to keep her out of the house’s upstairs for reasons of farce, asks her “Why would you wanna get out of those clothes when you look so dang cute in them?” “Dylan, if this is puberty for you, then I’m so out,” this child actor replies. Elsewhere, the three sons’ attraction to Bailey — and her commenting on their shirtless bodies — is a motif the show explores, as is youngest daughter Chloe’s worldliness. “He could use a girlfriend,” she remarks, when one of her brothers is getting sweaty and desperate over a girl. Why is their father attracted to a woman who’s obviously wrong for him? “Men are visual,” this child declares. “She looks like Elsa!” The “Frozen” joke at the end of the line can’t salvage the gross, unsuited maturity of the beginning. None of these lines, delivered by an adult, would look much more than dated, but it’s a color that looks unappealing on performers who are still getting legally-mandated schooling on set.

Why this show is positioned as “conservative” is somewhat baffling — this show’s child characters, for all that they wear crosses around their necks and help their dad care for his horses, are more obsessed with sex than their peers over on “Euphoria.” There’s absolutely nothing wrong with well-made art about and for conservative audiences (I am thinking here, for instance, of many of the late films by Clint Eastwood). It could be argued it represents a sort of exhaust valve that keeps some from turning down rabbit holes of resentment — but this show’s point of view on its characters’ cultural conservatism is completely upside-down, even hypocritical. It doesn’t really count as family-values TV if that family’s values go as deep as a belt buckle and a country tune. It’s hard to believe audiences could be fooled by this, though surely some will be.

Given the better-not-to-contemplate dialogue for the kids and the absence of Cibrian, “Country Comfort” seems above all else a canny escape hatch for McPhee, who — after placing second on “American Idol” in 2006, on the show’s most-watched season ever — has had an unsteady run at trying to position herself as a gay icon, following up a turn on NBC’s “Smash” with a Broadway stint and a prolific social-media presence that at times crossed the border into outright appropriation of gay slang. Gay men, traditionally, are unusually forgiving of female artists for whom the industry can’t find a place. But the revelation, in 2020, that McPhee had been a donor to Republican candidates ended her courting of the community she’d once called “my gay boys,” with annoyance in some corners that a celebrity who’d been willing to soak queer people for money and, especially, attention seemed blind to what really mattered to them. Her character’s showing up on the doorstep of a churchgoing “heartland” family has a rich metatextual element. There appears to be nowhere else in the world of entertainment for McPhee to go.

But “Country Comfort” builds, too, an argument as to why that might have been the case. McPhee’s singing, frequently showcased, is technically unimpeachable but utterly character-free. It’s the apotheosis of “American Idol”-voice, out of place in a genre in which superstar sounds have a little more grit. And as an actor, McPhee is an excellent singer: Her put-on twang suggests that the country mindset may be more than just dropped “g”s at the end of gerunds. And — unlike her forbear, the sharply witty Fran Drescher on “The Nanny” — her benevolent cluelessness as incest-tinged jokes fly over her head can read as McPhee simply not getting the joke. Given how strange those jokes that this airless failed comedy manages to make are, perhaps, by the end of it, you’ll think that she’s better off.