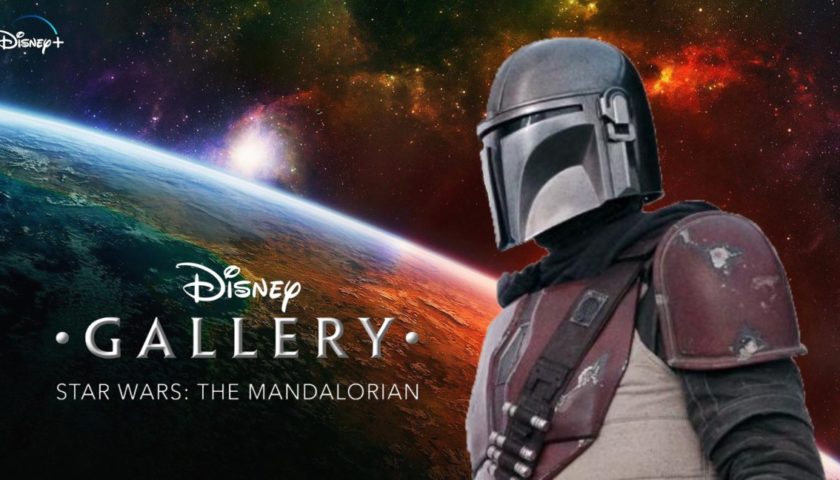 Do you remember Jon Favreau‘s talk show series Dinner for Five that aired on IFC from 2001 through 2005? It ran for 50 episodes, with each one finding Jon Favreau sitting down to order dinner with four other celebrities to discuss show business, look at their careers, and share stories from their time in the trenches of Hollywood. That basic formula is applied again in the new documentary series Disney Gallery: The Mandalorian, but mixed with plenty of behind-the-scenes footage from the live-action Star Wars series on Disney+, and a plethora of insights into the series and the entire franchise.

Featuring the various filmmakers, cast members, and movie magic wizards who have worked on The Mandalorian and the Star Wars saga at large, Disney Gallery: The Mandalorian is chock-full of fascinating anecdotes, hardcore Star Wars nerdity, mesmerizing footage from the set, and extensive conversations about both the difficulty and excitement about working in the Star Wars universe. It’s a show that will satisfy the most passionate Star Wars fans and the more casual audience members who just want to know about how the sausage is made.

Disney+ provided us with the first two episodes of Disney Gallery: The Mandalorian, a series that combines behind-the-scenes footage and talking heads with a candid talk show involving the talents that make Star Wars stories possible. It’s like a mix of the feature-length documentaries included in the supplementary materials of the home videos releases of the new Star Wars trilogy and lively roundtable discussions that provide a little more context and insight. Each episode of Disney Gallery: The Mandalorian focuses on a different aspect of making the Star Wars series, ranging from the team of directors tasked with bringing these stories to life to the innovative technology that enhances them.

In the first episode, Jon Favreau sits down with all of the first season’s directors, including Dave Filoni, Taika Waititi, Bryce Dallas Howard, Deborah Chow, and Rick Famuyiwa. The filmmakers discuss their relationship with Star Wars before coming to The Mandalorian, where their careers started in general, the daunting task of telling a story in the Star Wars universe, and the feeling of being surrounded by a galaxy far, far away.

The second episode gets significantly more nerdy when it comes to the history of Star Wars and the making of The Mandalorian. It features Jon Favreau and Dave Filoni again, this time joined by ILM visual effects supervisors John Knoll and Richard Bluff, animation director Hal Hickel, and even Lucasfilm president Kathleen Kennedy. This episode dives into the legacy of Star Wars, especially the influence of George Lucas, the filmmaking innovations that he brought to the table with the franchise that benefited the entire film industry, and how The Mandalorian stays true to the spirit of Star Wars.

Dave Filoni is the MVP of these first two episodes, both because of his wide breadth of Star Wars knowledge and because he has the best story of how he first came to work on Star Wars for The Clone Wars. The other filmmakers clearly have an immense amount of respect for his passion and knowledge of Star Wars, but each of them have their own shining moments and stories from working on The Mandalorian. Even if you’ve never seen The Clone Wars or Star Wars Rebels, you’ll be amazed by Filoni’s perspective here.

The candid nature of the discussion between a group of filmmakers who have clearly become friends after being at Star Wars camp makes for amusing and informative entertainment. The set footage is also enhanced by talking heads from the cast and filmmakers, giving a well-rounded glimpse at the thrills and pressure of working on such a revered and highly scrutinized property. If the rest of the episodes are as engrossing and delightful as these first two episodes, then this will be a joy to watch in the coming weeks.