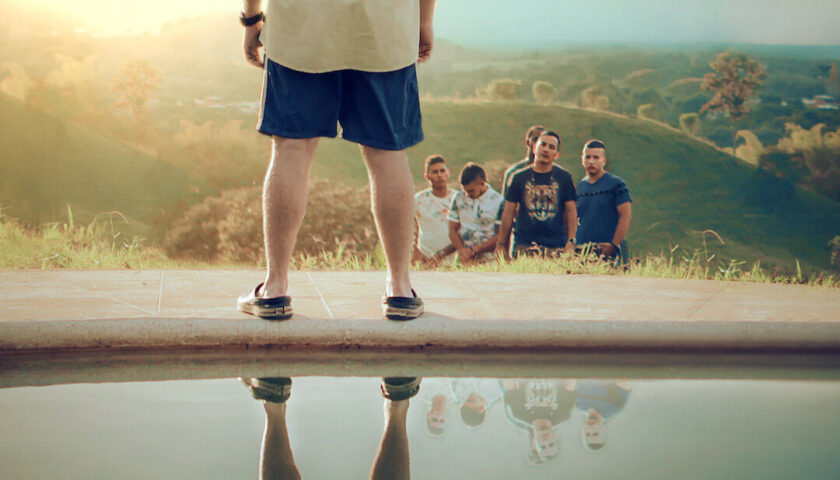 Some have colorful names, many have down and dirty secrets and nobody’s shy about spilling blood.

It’s a dark comedy that could use a lot more comedy. And it’s a Ritchie homage that fails to copy the most important ingredient in such bloody romps — speed. This ungainly beast lurches along when it needs to sprint. It’s slow — like a stoner Guy Ritchie mob comedy.

Moreno tells a convoluted story of rival mobs, a ruthless younger thug leaning on the older, failing Don Oscar (Christian Tappan) and his minions. After a machete slashing blood-spattered prologue, he identifies the cast of characters, from the mob leaders down to the aged gardener and the gardener’s grandson, and the mob’s sumo-sized dog washer, Jobolitro (Ulises Gonzalez) in the opening credits.

One of those minions is cheating with Don Oscar’s wife (Isabella Litch). But Don Oscar is cheating all over town, and not above killing a mistress if he suspects treachery. As the cops have moved in next door to the sprawling, tumbledown mansion he’s taken over, and he owes money to this younger rival, he suspects everyone.

His paranoia isn’t helped by heavy middle-aged-man meth use.

The rival Dubernay is hellbent on collecting his cash. Then again, maybe not. He’s a sadist and seems to enjoy killing Don Oscar’s footsoldiers.

“We are crooks,” he shrugs at one in that opening scene. “Crooks solve problems this way.”

So Don Oscar’s got a decision to make, is fretting over the “workmen” he realizes are cops at the property next door, had mistresses to see and drugs to smoke. And all those around him are trapped in his slow-motion slide into annihilation.

“Slow motion” describes the 107 minute movie, too. There’s a literal ticking clock of peril closing in around them and Moreno’s script is intent on showing this or that bit of sex, throwing in more subplots about stolen mob money and several characters having the dream of using that cash to “get out.”

The elements are here to make a pretty good expectations-flipping farce with firearms. But Moreno, who appears to intend this as a period piece (’90s phones, ’80s and older beat-up cars and trucks), slow-walks everything.

What’s worse, he gives us no one to really root for. Sure, the big guy washes the dogs and goes to church. Sure, the gardener’s grandson is looking at no future at all. But do we develop real empathy for them, or any of the double-crossers arrayed against them?

Our director conjures up an ugly, sweaty, fly-infested world of pigs who eat, groom, kill and copulate like pigs. His characters have a hint of “character” about them. They could have been funnier, more outlandish. But none of that matters when the comic thriller they’re in has all the moves of a Galapagos tortoise.