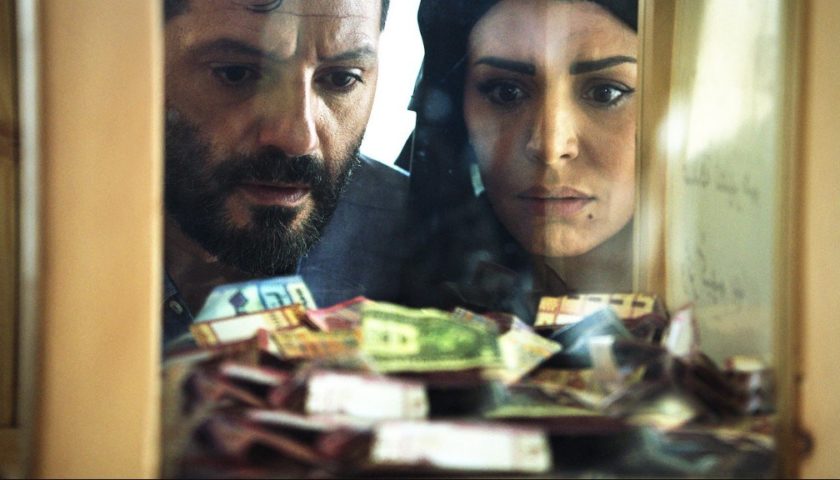 The caper drama, where two mismatched people solve crimes or chase after someone or something valuable, are always fun because you get to see a partnership and relationship develop between two people who started the film or series as strangers. The Lebanese series Dollar is a classic caper, with two appealing leads that will fight, hook up, and fight again (within Lebanese parameters, of course).

After an extraordinarily long opening credits sequence (seriously, it’s almost three-and-a-half-minutes long), we see pictures of Beirut during the holiday season. The CEO of SBH Bank is on national TV to award a huge prize to someone with a lucky dollar, a promotion to celebrate the opening of the bank’s new main branch.

We go back a number of months, and we see two people getting ready for their day. Tarek (Adel Karam) slams down his alarm clock, splashes water on his face and runs down to his car promising the building’s manager that he’ll pay his rent. Zenia (Amel Bouchoucha) puts her makeup on and contemplates the day before she goes to her car, where she sees her fiance, who promises he’ll have good news for them at dinner.

They’re both going to a big meeting at SBH. Zenia works there as the office manager and assistant to the CEO, and Tarek knows that his pitch for the bank’s big campaign will be a good one. The CEO thinks otherwise. But when a dollar slips out of his pocket (apparently in Lebanon, US currency is used a lot), he gets a eureka moment. A dollar bill with a particular serial number will be released into circulation, and whoever has it on New Year’s Eve will win a million dollars (not a million Lebanese pounds, which is only about $660). The CEO loves the idea and thinks he can make it happen. But he asks Tarek to take his dollar with him. Also some his questions about fake winners are a bit suspicious.

Zenia is called in and she can’t believe that her boss is going to go through with this risky venture. He asks if she has a dollar; he gives her one she found in her purse.

The next day, after a bad dinner with her fiance, who won’t break away from his father’s company, Zenia gets some information about the CEO that makes her suspicious. She finds a selfie she took with the dollar in the picture, so now she and her boss both know the serial number. Some other clues send her to a taxi company… where she runs into Tarek.

We don’t see too many shows from Lebanon on these shores so just for that reason, Dollar is refreshing. It shows a Beirut with a gleaming, modern business center and older residential areas consisting of gorgeous architecture. You’re reminded that the city’s French roots when you hear phrases like “bon jour” and “Monsieur” mixed into the Arabic. And it’s fun that writer Hisham Hilal has given us a good old-fashioned caper series that will take viewers to different parts of Beirut.

But the first episode struggles to set up just why the CEO was so eager to take Tarek’s idea about the “lucky dollar.” There’s a lot of time taken up with dramatic music, people futzing with phones and longing looks while thinking about things. But at the end of the first episode, we are still not 100% sure what will happen in the 14 that come after it.

We get Tarek’s motivation to find the dollar — he wants the money. But the CEO gave him a special “reward” for the idea, and that value gets Tarek’s attention. We get a music cue that it has his attention. But we don’t know why. And if the reward was so good, why is he chasing after the dollar? And how did he know where the CEO first put it into circulation?

As for Zenia’s motivation to get the dollar, we’re still unsure. In the trailer, she says “that dollar was mine!”, but we’re not sure that’s the reason. She thinks something is squinchy about her boss and that he may be setting things up to take the money himself, or worse. What taking the dollar means with regards to that is unclear.

Knowing both of their motivations to chase the dollar for fifteen episodes would define their characters more, and will give their soon-to-develop partnership more weight. The whole idea of this show is likely a Moonlighting-style caper, where Tarek and Zenia fight and get to know each other really well as they chase the dollar. But at the end of that first episode, there just isn’t enough information to hold our interest for a second episode.