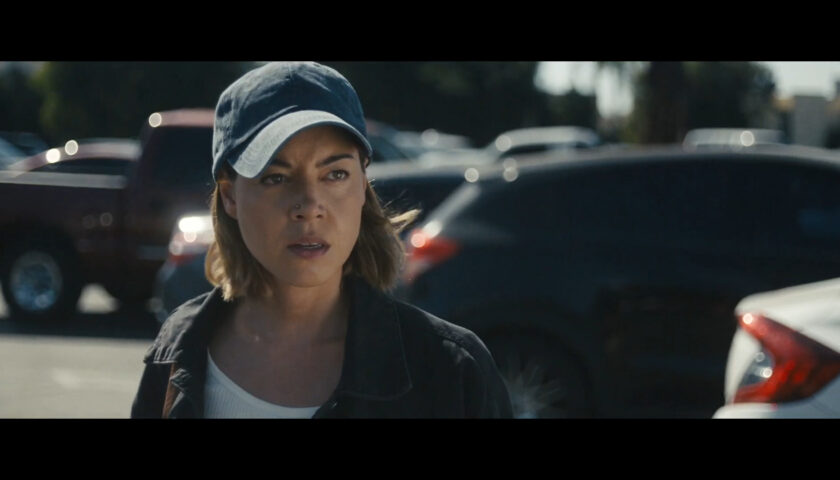 So what’s happening in the world these days? The Russians are exploiting the Ukrainians, the Chinese are after Taiwan, President Biden is taking out the head of al Queda. You can’t trust those foreigners. But can you at least trust your own fellow Americans? No way, according to John Patton Ford, whose “Emily the Criminal” is his striking debut, one which makes full use of the talents of Aubrey Plaza in the title role. Though cast largely in comedies, Plaza, whose last appearance was in “Operations Fortune: Ruse de guerre” which involves a mission to sell dangerous weapons technology, is the type of woman many feminists may admire, though there may be good reasons to calmly look at her situation and decline to put her forward as a role model.

Emily (Aubrey Plaza) is in bad financial shape. Though she is a talented artist, she hasn’t much of a clue to how to pay $70,000 in student debt. And she did not even get her Bachelor’s, having to drop out after a felony assault conviction. She now understands how difficult it is to break into the jobs market; never mind that there may be a shortage of workers nationwide. Exploited by her restaurant employer who considers her an independent contractor instead of an employee, she is an archetype of gig worker, unable to get steady employment in her field of art and design that might start her on the road to paying down her debt. She blows up at interviewers as when sitting across the desk of Alice (Gina Gershon), who offers her an internship with no pay for at least six months while her good friend Liz (Megalyn Echikunwoke) has an advertising job that landed her a trip to beautiful Portugal.

You can’t blame Emily for accepting an offer arranged for her by a co-worker that pays $200 an hour with the chance to move ahead rapidly should she prove able to do the job. Youcef (Theo Rossi), a gentleman whose kindness belies his job in the rackets, sets her up in a credit card scheme filled with danger, as you might expect when she purchases a $2000 flat screen TV (no problem) and then a car, that latter job resulting in a beating that requires her to think on the fly to escape from the clutches of some shady characters.

“Emily the Criminal” draws you into the plight of a young woman whose financial situation convinces her to take on an offer that she could not refuse. It would be difficult to consider any actress other than Plaza to evoke our sympathy and to almost justify her new experiences with the underworld as a way of getting back at the would be exploitative employers.