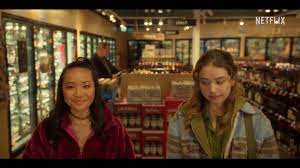 Netflix’s new comedy series Fakes follows two teenagers who earn big money creating fake IDs. The just-released trailer shows they also lose lots of money and get in trouble with the Feds over their illegal activities.

In an interview with Bustle, Emilija Baranac described the series as a fresh and fun take on a high school friendship. ““Hopefully, audiences will resonate with the characters in some capacity, whether they see their experiences represented or being reminded of that one friend they haven’t heard from in a while and feeling inspired to reach out,” said Baranac.

Fakes is the story of two best friends who accidentally build one of the largest fake ID empires in North America. They move into a downtown penthouse, have more cash than they know what to do with, and then get raided by the feds. One of them goes to jail, the other doesn’t. This is the story of their ultimate betrayal, told through each of their POVs with regular fourth wall breaks. This is a comedy drama with two unreliable narrators who are both competing for the last word.