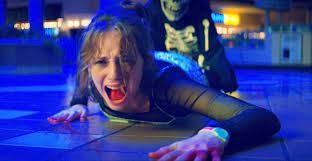 Writers: R.L. Stine(based upon the Fear Street books by), Kyle Killen(story by), Phil Graziadei(story by)

Felt like this movie was a missed opportunity, the storyline was alright but the execution of the 90s vibe was rather lackluster. Didn’t have that nostalgia when you’re watching Stranger Things or even AHS 1984. One thing that I noticed that didn’t make sense was, where is everybody in the film? Other than the main characters, it felt like they were in a ghost town, running around yelling and bleeding without other people noticing. Major plot hole.

The cast did okay as a whole, however the lead character, Deena (Kiana Madeira) was extremely unlikable. I don’t know if it was maybe the script or what but it was hard rooting for the final girl to survive when you don’t even like her. That’s another issue this movie has.

Overall, it would’ve been a more enjoyable watch IF the leads were likable. Maybe a different director with better execution fleshing out the 90s vibe.

I cannot get over how much money they must’ve spent on making this. It is absolutely terribly acted, terribly written and terribly directed. I have no idea what the source material was like, I never read the books and I don’t know anything about the author or the original stories. But I do know horror movies, and this is not one! It definitely looks and feels expensive. They have clearly spent a lot of money marketing this. But this is worse than the cheapest of 80s or 90s horror flicks. Do not waste your time! I cannot get over how artificial so many of these ratings are. You people gave this a 10 out of 10? Really? This is a 2 or 3 out of best.

I think we will see the ratings drop dramatically for the next two instalments. This is a massive waste of money, and a massive waste of your time. I don’t think this will be enjoyed by teenagers or people like myself who enjoyed 70s 80s and 90s slasher.

Please watch the original Nightmare on Elm Street and press delete on this – I encourage you to give this a big thumbs down on Netflix to tell them we do not want more garbage like this.