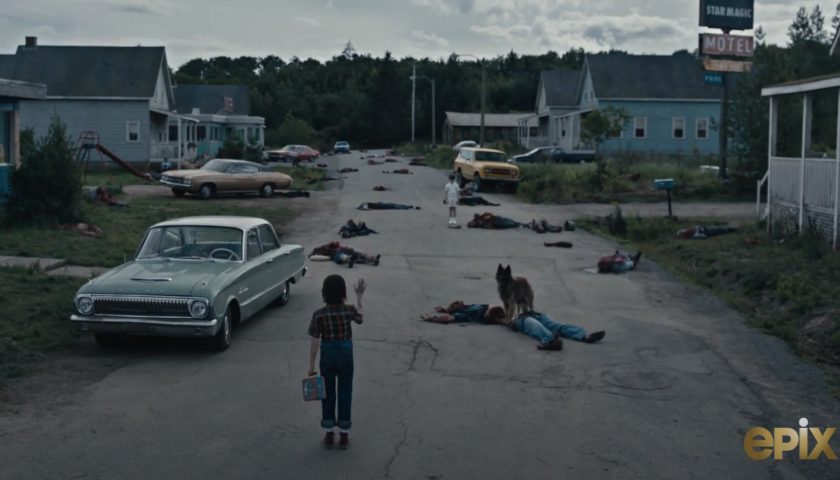 It’s no surprise that Stephen King has endorsed the new Epix horror series From. In fact, no one would be blamed for assuming that From was based on one of King’s lesser-known novels or stories given how the series seems deeply indebted to the Master of Horror’s storytelling style and thematic interests. While the four episodes of From available for review are effectively creepy, however, the series has a generic quality that it never quite shakes.

From relies on the familiar device of the isolated, mystical town that allows no escape. The same trope has cropped up in King works like Under the Dome and The Mist, and also in recent series ranging from Netflix YA drama The Society to Apple TV+ musical comedy Schmigadoon! The town in From has no name and, as the residents eventually explain, it also has no fixed location. The people who wind up stuck there seem to have entered from various points across the United States. That’s what happens to the vacationing Matthews family, who encounter a fallen tree in the road and then seem unable to return to the highway. Eventually, they drive into a dilapidated, sparsely populated town. However, when they try to take the road out of town, it only deposits them right back at the entrance.

The Matthews family serves as the audience surrogate, introducing viewers to the town in which some of the residents have been stuck for years, or even decades. The inability to leave is just one of the town’s problems; far worse is what happens when the sun goes down and bloodthirsty monsters roam the streets. These supernatural creatures look and sound like people until they get close enough to tear your flesh apart. The only way to stay safe is to remain indoors after dark, with locked doors protected by special talismans.

The person who makes sure everyone stays safe is Sheriff Boyd Stevens (Harold Perrineau), who may not be an actual law enforcement figure but has become the de facto leader of the town. The first episode opens with Boyd walking down the main street, ringing a bell that warns residents it’s time to get inside and lock their doors. On that night, something goes wrong and Boyd has to erase his “nights without incident: 96” sign after a mother and her young daughter are killed. The next day, the Matthews arrive, along with a couple of drunk, entitled bros who run the family’s RV off the road and injure their young son Ethan (Simon Webster).

Eventually, the Matthews join the town, participating in a “choosing ceremony” as they decide where to live. The main part of town follows Boyd’s strict rules, while in the communal, freewheeling Colony House, residents engage in hedonistic pleasures because every day may be their last. There are a lot of silly-sounding rituals and traditions in From that are designed to make the town seem like an established world of its own, and many of them aren’t quite convincing. As far as King-influenced horror creators go, From’s John Griffin is no Mike Flanagan, and From lacks both the complex characters and the intense terror of Flanagan’s equally King-indebted Midnight Mass.

That doesn’t mean From isn’t entertaining to watch. In addition to Griffin, the creative team includes numerous veterans of Lost and other J.J. Abrams-produced series, and there’s a mystery-box quality to the way that From slowly reveals the secrets of the town. There are also plenty of characters to explore in the large ensemble cast. As From progresses, those characters are likely to develop further, beyond their somewhat sketchy outlines in the initial episodes. Perrineau, another Lost veteran, is a commanding presence as Boyd, who projects leadership qualities but harbors severe personal doubts. Avery Konrad is especially haunting as Sara, a resident who seems to have been chosen by the monsters to carry out their inscrutable murderous agenda.

From takes time to focus on its interpersonal relationships, from the crumbling marriage of Jim (Eion Bailey) and Tabitha (Catalina Sandino Moreno) Matthews to the estrangement between Boyd and his artist son Ellis (Corteon Moore), who’s spurned his father’s rule to live in Colony House. Those relationships are just starting to come into focus in the first four episodes, however, as From’s careful world-building can be frustratingly slow. Whenever the show seems to be getting tied up in its personal drama, there’s a gruesome death to shake things up. Griffin and director Jack Bender create some terrifying scenes in these four episodes that give a tangible sense of how dangerous the town is.

Like most series built around supernatural mysteries, From could easily fall apart once the creators start revealing more about what’s really going on. The slow pacing also means there’s time for distractions from the ultimate mystery. Jade (David Alpay), a hard-partying tech titan who comes to town at the same time as the Matthews, spends one entire episode convinced that the town is an elaborate escape room or alternate-reality game. The rules and rituals he lays out make From feel more like a puzzle to be solved than an engrossing drama. However, if those rules and rituals lead somewhere rewarding, then it will be worth spending time with these characters to see what they make of it all.