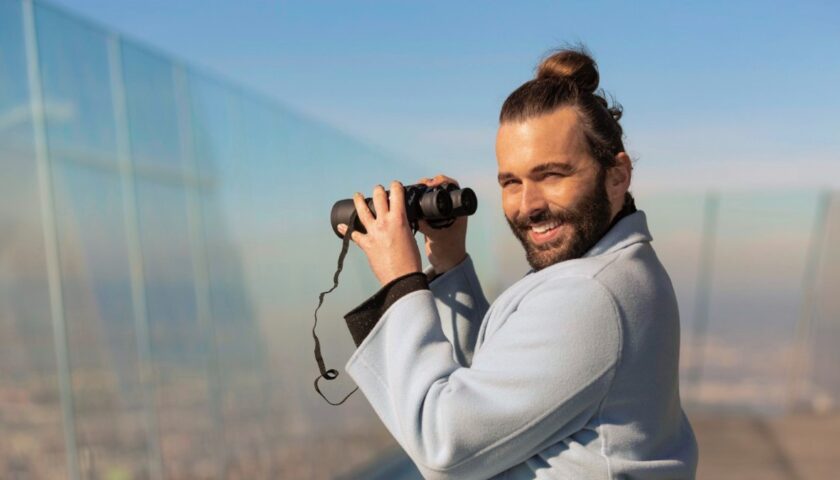 Did you know that the earliest hair extensions on record are over five thousand years old? Doesn’t that just snatch your wig? That’s just one of the many facts you’ll learn by tuning into the latest arm of the Jonathan Van Ness empire, their new Netflix series Getting Curious. And it’s produced by World of Wonder – aka the company that makes the juggernaut that is RuPaul’s Drag Race.

Inspired by Van Ness’ long-running podcast, which has been a staple for knowledge-hungry fans of the Queer Eye breakout star since it debuted in 2015. Its premise is simple: JVN finds something that sparks their interest, and interviews experts to find out more.

The Netflix series doesn’t do much to break the podcast’s mold, with the first season introducing us to six topics that are near and dear to Van Ness’ heart: insects, hair, the gender binary, snack foods, figure skating, and skyscrapers. Each 30-minute episode follows the same basic narrative: JVN introduces us to the topic and how it relates to their life, they go out into the wild to see the topic for themselves and conduct interviews with experts. Interspersed with the education, each episode is full of humorous skits, like an alien gender reveal party destroying Manhattan, and Pop Up Video style bubbles labeled “Curious Facts” give additional facts or context to whatever JVN and their guest are discussing.

The editing is quick-paced and fun, leading the viewer down a rabbit hole of JVN’s obsession du jour. This really is fun for the whole family. The skits are cartoony and zany in a way that captures the type of curiosity we all felt as kids blended with a love of the wacky. Heck, in the first episode, we are treated to one of the oldest cartoon cliches, an angel and devil on JVN’s shoulders. Even with its almost childish appeal, the humor works for adults as well, by keeping it relatable to even the more curmudgeonly among us. I mean, who can’t relate to a small mouse trying to convince us to eat more Oreos?

That broad appeal does come with a drawback, which is the lack of a deeper dive into the topics. Unlike the podcast, which gets to go into greater depth with its subjects, the show is content to leave its topics with a surface-level exploration. For example, there are at least two recent podcast episodes about bugs, one focusing on spiders and the other on cicadas, whereas one TV episode covers all those and more. It’s pretty apparent the intent of the show is to be a jumping-off point – which is all the weirder there isn’t much of a plug for the podcast.

Even though the content is 101 level stuff, each episode demonstrates how seemingly neutral topics have a political side. Bugs are cool, but also eating bugs may be one of the best ways to save the planet! Skyscrapers are marvelous, but they displace people when built and we are at risk of running out of building materials. It’s this exploration of the political side of every day topics that really sets Getting Curious apart from other general educational shows.

This is why the episode on snacks is the least engaging of the season: it mainly sticks to basic factoids and factory tours for snack foods. Even worse, JVN leans really hard at the end on the naturalistic fallacy when gushing over an organic snack food that only has six ingredients you can pronounce. In the end, the episode feels more like an ad than an education.

Overall, your enjoyment of Getting Curious is going to hinge on if you like JVN’s personality and hosting style. They’re outgoing and have a childlike glee that is appealing for many but may well leave you cold. These are fun, bite-sized bits of knowledge that will satisfy your cravings for something that’ll teach you something, but they still go down easy.

Getting Curious with Jonathan Van Ness sashays over to Netflix on January 28th.