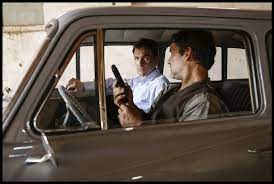 Glória is a Portuguese-language Netflix Original spy-thriller created by Pedro Lopes. Amidst the Cold War, the Angolan war for independence, and the waning days of the Salazar regime, American radio transmitters secretly send anti-communist propaganda beyond the Iron Curtain. But a lot is awry in the village of Glória do Ribatejo. Loyalties are unclear, rumors spread quickly, and the fate of the world just may balance on these airwaves.

You like espionage? How about double agents? What of triple agents? What about main characters whose allegiances are so unclear they keep you guessing for ten episodes straight? That’s what you get and more from Joāo Vidal (Miguel Nunes) and Glória. For no moment until the very last can you tell quite where the plot is going or where Joāo’s loyalties truly lie. But when the show does conclude, you will be left mind-blown and grasping for more answers.

This is a show with a very nuanced take on often oversimplified politics. It’s neither glorying of American/Western anti-communism nor supportive by any means of the Portuguese or Russians. It sits in a resoundingly complicated middle space where everyone is wrong and everyone is right at the same time, well, everyone except the fascist, colonialist, racist, dictatorial, conservative Portuguese regime. For an American audience whose Cold War perspective is typically locked into the conflict between the U.S. and Russia and the hot wars the United States fought in in Democracy’s name, some of the details of the period that the show quickly glosses over may be confusing at first, since they’re likely intimate parts of history for local Portuguese audiences.

Portugal was the last European power to renounce its imperial claims and fought vehemently in wars against its colonial subjects, particularly in Angola. Salazar’s Estado Novo was a dictatorial and extremely conservative government at the time that ferociously fought communism just as well as it fought liberalism and anti-colonialism. The United States was a tepid ally; Portugal’s goodwill with the Western Superpower helped secure the country against communist threats but the Democratic government in the U.S. was not fond of Portugal’s dictatorship and conservatism. Understanding this background is key to understanding how it is that an American propaganda project came to be housed secretly from a small town in Portugal.

There’s no background history lesson needed though to get what’s at the heart of this thriller: a man roiled by a pointless and unjust war, torn between his morals and his father looming large over him and the whole country. The acting isn’t special so much as it’s simply convincing. Nunes plays the perfect spy because he is just impossible to crack. The cast of characters around him all play their roles with equal standardness. Americans James Wilson (Matt Rippy) and Anne O’Brien Wilson (Stephanie Vogt) are just as much out straight out of central casting as Russian agent Alexandre Petrovsky (Adriano Luz). No individual performance is especially stand-out, but altogether, they make a completely fictional story feel like it actually happened.

The only major complaint I must levy against the series is the gratuitous nature of some of the violence, particularly the sexual violence. Two separate times there are detailed, graphic scenes of this kind that exist specifically to exhibit some characteristic of the man perpetrating the violence. Neither feels essential to the plot or the audience’s understanding of the characters, resulting in disturbing moments that are simply never brought up again. Some of the physical violence also gets grotesque in a way that feels like it is only for the sake of extra shock value but lingers for too long on the screen and becomes upsetting rather than simply disturbing.

Additionally, a small trouble I had with Glória was the confusingness of some of its scene changes. Flashbacks or quick transitions to concurrent or recently-occurred scenes sometimes happen without explanation, exposition, or on-screen indications, which occasionally leads to uncertainty over what is happening when or even who is in a given scene, since costumes on some characters change dramatically depending on the time or location.

Glória is an excellent mini-series though, with a spy tale that will have you unsure of where its main character’s loyalties truly lie the whole way through.

Glória is streaming now on Netflix.