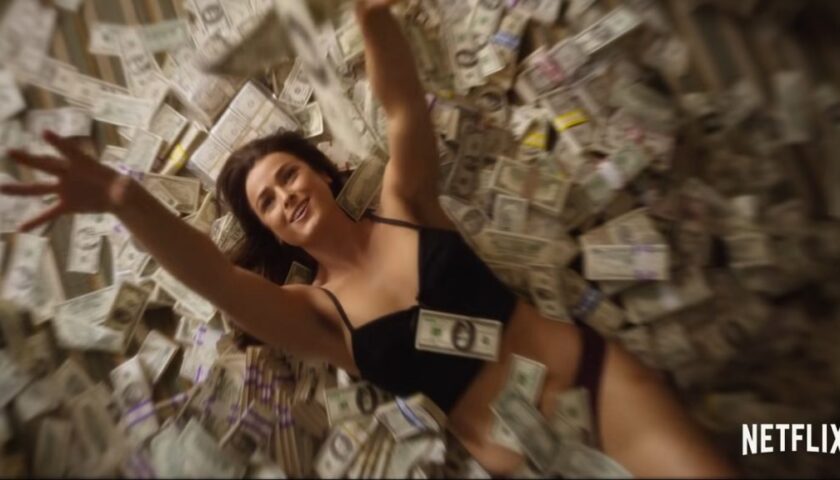 Serious crimes were committed by the subjects of the six-part, three-pronged Netflix documentary series “Heist,” but nobody was murdered or injured. So it doesn’t seem inappropriate for the filmmakers to employ a relatively breezy, “Catch Me If You Can” approach to the telling of each real-life, can-you-believe-this-stuff story.

Talk about rich fodder for a true-crime documentary series.

Each heist gets a two-part treatment. The first, titled “Sex Magick Money,” focuses on Heather Tallchief, a clever and beautiful 21-year-old from a seriously broken home who was wandering through life when she hooked up with one Roberto Ignacio Solis, a.k.a. Pancho Aguila, a bad actor who had done time for murder and was into black magic and voodoo — and manipulating vulnerable young women who fell under his spell. In 1993, despite a lack of experience, Tallchief was hired as a driver for the Loomis Armored Car Co. in Las Vegas, which made regular cash runs on the Strip, replenishing ATMs at multiple casinos. On one such route, Tallchief was behind the wheel outside the Circus Circus casino as her two colleagues went inside and filled the machines. When they came out, Heather was gone, having sped away with the truck containing some $3 million in cash.

Actors portray Tallchief and Solis as they escape Vegas and wind up in Florida, with Tallchief disguised as an old lady. (Another actor portrays Tallchief in present day, giving an interview. Every word is from transcripts of interviews with the real Tallchief.) We follow Tallchief to Amsterdam, where she had a son and hid in plain sight for a decade before deciding to turn herself in. As for Solis … nobody knows what happened to him.

In “The Money Plane,” we’re introduced to Cuban immigrant Karls Monzon, a hardworking, unassuming man who doesn’t have the funds to cover the cost of an adoption — which leads him to assembling a crew and planning a heist at the Miami International Airport. Turns out there was a Brinks warehouse with a woeful lack of security, and even Karls and his ragtag crew of small-timers were able to pull off the robbery. They might even have gotten away with it, if not for Monzon’s brother-in-law Jeffrey, a free-spending, coke-snorting, strip-club-loving, motormouthed member of the crew who kept flaunting his newfound wealth even after he was kidnapped and beaten and told to shut the bleep up and lay low. (Jeffrey was actually kidnapped a second and THIRD time before he was rescued — and immediately arrested.)

Part 3 of the series, “The Bourbon King,” tells yet another tale brimming with colorful characters, this time in Frankfort, Kentucky, where softball is more a way of life than a mere grown-up’s hobby, and softball great Toby Curtsinger forged lasting friendships with a number of teammates and opponents. But after Curtsinger got married and had kids, his wife told him, “You pick softball or you pick me.”

“When I quit playing ball … I go to work, come home, cook, eat, take care of the kids, get up, go to work,” says Curtsinger, who was working at the Buffalo Trace distillery. By the 2000s the distillery’s Pappy Van Winkle bourbon had become an insanely hot commodity, with people paying more than $1,000 online for a single bottle of the small-batch brown. Curtsinger had taken a couple of bottles home and he gave them to a friend — who returned the next day with a thick wad of cash he had received for the two bottles and said there was big demand out there for more of the stuff.

A heist was born. Curtsinger got mixed up in all sorts of shenanigans in the case that attracted nationwide media attention and was dubbed “Pappygate.” (The doc makes a convincing case there were a number of co-conspirators, but Curtsinger was the only one to serve time for Pappygate.) As in the two previous stories, “The Bourbon King” moves at a brisk pace, alternating interviews with real-life subjects with re-creations set to catchy music as the craziness spirals out of control. All three of these tales have more than enough material to make for a feature-length film.