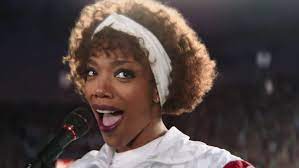 I Wanna Dance with Somebody 2022 Movie Review

During the 1980s, Whitney Houston quickly established herself as one of the most iconic voices in pop. Like many mega-stars, Whitney’s career burned hot and bright, before eventually crashing and burning. Her musical prowess earned her seven consecutive number-one singles, the only artist to ever achieve such a feat. Arguably her most iconic song, “I Wanna Dance With Somebody,” has been a dance hall anthem since its 1987 release, now lending itself to the title of a biopic on the star. The song’s message about wanting to dance freely and publicly with the person you love caused it to be swiftly adopted by the gay community. This cultural influence was supported by Houston’s AIDS activism at the height of the epidemic, coinciding with the height of her career. Many fans assumed this was enthusiastic and genuine allyship, or another instance of gay men adopting female pop stars into their community, but the late singer’s alleged closeted sapphic identity adds a whole new level of depth to her art and her activism.

However, the pop diva’s life was plagued with controversy. Early in her career, rumors of a lesbian relationship threatened her success. Whitney never admitted to the relationship publicly, but former partner Robyn Crawford opened up about their love affair in a 2019 memoir. Houston would eventually become involved with fellow singer Bobby Brown. Whitney and Bobby’s tumultuous marriage frequently made headlines with claims of abuse, infidelity, and drug use. After fifty-seven singles as a solo artist, Whitney’s life was tragically cut short in 2012 at the age of 48 due to an overdose. She was survived by her daughter, Bobbi Kristina Brown, who was only 18 years old at the time. Will the film be an uplifting and honest look into the life of pop royalty Whitney Houston, or just another Oscar-bait cash grab capitalizing on the success and hardship of a music icon? We’ll have to wait and see. But in the meantime, here’s everything we know about the movie I Wanna Dance With Somebody.

Naomi Ackie is on track to be an accomplished leading lady. After appearances in fandom favorites Doctor Who and Star Wars: The Rise of Skywalker, Ackie landed a recurring role on Netflix’s Master of None. She’s also set to star in Zoë Kravitz’s directorial debut Pussy Island, and appear in legendary filmmaker Bong Joon-Ho’s new project, Mickey7. Naomi Ackie is Whitney Houston in the upcoming biopic.

Famed record producer, friend, and collaborator to Houston, Clive Davis is closely involved with the film as a producer. Davis discovered and signed the young singer when she was only 19 years old. The producer is also recognized for his work with powerhouses of the music industry such as Pink Floyd, Sly and The Family Stone, Janis Joplin, Billy Joel, Santana, Barry Manilow, and many more. Davis will be portrayed by Hollywood favorite Stanley Tucci, to which he displays a striking resemblance.

Actress Tamara Tunie is perhaps best known for her twenty-one-year tenure as the capable medical examiner Melinda Warner on Law & Order: Special Victims Unit. Tunie will play Whitney’s mother, Cissie Houston, a gospel singer who fostered her daughter’s talent into adulthood. Before Whitney’s big break, her mother sang back up for some of the biggest names of the era, including Aretha Franklin, Elvis Presley, Jimi Hendrix, and Dionne Warwick, who was actually a cousin of the Houstons.

Whitney’s father, John Russell Houston Jr., was a US Army serviceman and city administrator for her hometown, Newark, New Jersey. He helped manage her career, before a disagreement in money management caused a rift between father and daughter. Writer, actor, and director Clarke Peters has been cast as Houston Jr.

Nafessa Williams (Black Lightning) previously appeared in a minor role in the Angela Basset directed Whitney, another biopic about the life of Houston. This time around, Williams is set to play a more prominent role in the singer’s life: her first love and creative director, Robyn Crawford.

R&B singer Bobby Brown, known for hits such as “My Prerogative,” first met the young singer at the Soul Train Awards. The two quickly fell in love and married in 1991. Many credit Brown with Whitney’s spiral into drug use, at the very least acting as an enabler. The infamous Brown will be played by Ashton Sanders, who first garnered acclaim in the 2016 Oscar-winning film Moonlight.

Bobby and Whitney had one daughter, Bobbi Kristina Brown. Bobbi made appearances on the reality TV show Being Bobby Brown alongside her father. Unfortunately, she passed away only three years after her mother in 2015. Bria Danielle Singleton, who previously appeared in the Netflix superhero comedy Thunder Force as the younger version of Octavia Spencer’s character, has been cast in the role.

I Wanna Dance with Somebody 2022 Movie Download 1080p filmyzilla

I Wanna Dance with Somebody 2022 Movie Download 720p filmywap

I Wanna Dance with Somebody 2022 Movie Download 480p khatrimazza

I Wanna Dance with Somebody 2022 Movie Download 360p pagalworld

I Wanna Dance with Somebody 2022 Movie Download 144p tamilrokers

I Wanna Dance with Somebody 2022 Movie Review