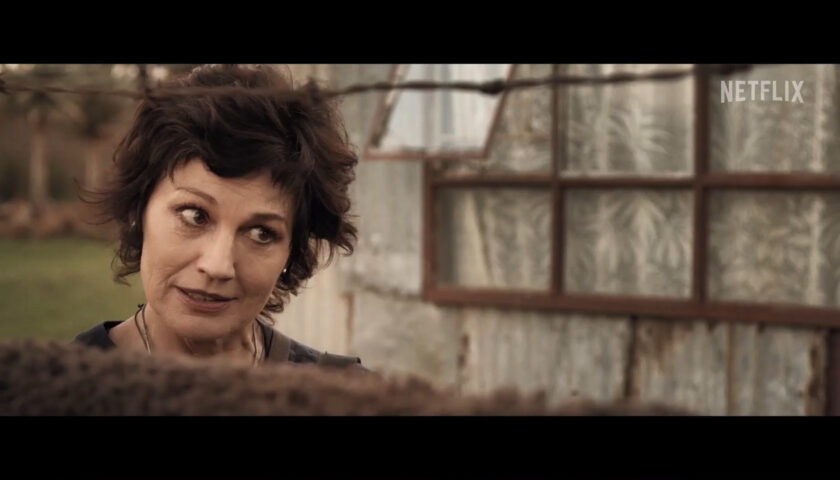 As has been the case with several South African stories told by South African directors on Netflix lately, the ghosts of Apartheid – both past and present – define the narrative of Jewel. And like most of these homegrown films, an interesting concept is marred by unpolished execution. For instance, you can sense the inexperience – and over-excitement – of being able to craft a long tracking shot, or a soaring bird’s-eye view of a snaking river; the camera is too conscious of its own movement. When the subtext fails to be revealed through the action alone, a wise old woman with all the answers (the morals, conclusions, psychological portraits) is parachuted into the film. The characters themselves are participants as well as exposition devices. I got particularly annoyed when one of them compared the shooting of people to the shooting of cameras with unerring eloquence – the sort of wordplay that should be reserved for film critics and watchers alone.

The premise is thoughtful, but in a student-film sort of way. Jewel opens with a middle-aged white photographer from Cape Town, Kyra, who is visiting the memorial site of the 1960 Sharpeville Massacre. She was born in the region. A fellow tourist on her tour explicitly says that it’s “white guilt” that’s led him here to learn about how “his people” scrambled the soul of this small township. He exists so that we know that Kyra isn’t sure about why she’s back – she cracks jokes about the place and its history, so that we know a transformation is imminent by the end of the film.

Early on, Kyra tells the man that she “bats for the other side” – which is supposed to imply that she’s gay, but also that comes from the wrong side of Aparthied. She sees a local girl, Siya, emerge from a river like an angel, and gets fascinated with her, the way an artist looks at a muse. The two women soon forge a bond, much to the consternation of Siya’s jealous boyfriend – a young man who is bitter about the white-police-driven Massacre in which his grandmother died. A conflict ensues. The river plays a starring role in this conflict.

There are fundamental issues. For one, Kyra’s surname – Black – is one of the laziest metaphors. Given that Kyra is supposed to be ‘finding herself,’ the character comes across as creepy, almost predator-like, in the way she approaches the beautiful Siya. The manner in which she walks down the street with her and convinces Siya to be her “personal tour guide” is poorly worded. The LGBTQ+ angle is brave but not organic. It always seems like Kyra is a woman for the sake of narrative convenience – a man might have made it harder to sell Siya’s sudden trust in a white stranger. There is little chemistry between the two, and no awareness of the real-world consequences of a privileged white woman abandoning her tour group to pursue her own exotic awakening. The final resolution is self-defeating – almost vengeful under the guise of karma.

Then there’s the role of the river, an integral part of the region’s trauma and spirituality – except the blue underwater scenes have absolutely no visual link with the brown muddiness of the surface. It may sound like I’m nitpicking, but the dissonance is confusing, because it makes the underwater portions look like a music-video-like dream. Even the drama of life and death is filmed in a strangely muted tone, as if people are living and dying solely so that the characters in the film can have profound lines to speak and tears to cry. The performances are just as stilted. Except for Nqobile Nunu Khumalo as Siya – who tries hard to transcend her supermodel-like features to look like she belongs – none of the cast has an impact on the uninitiated viewer.

A lot of modern South African films don’t shy away from grappling with lingering institutional racism and the long-term trauma of the Aparthied era. As an Indian in an increasingly censored State, I can only admire their courage and freedom to do so. The words we hear on screen are lived-in and time-hardened truths – a mirror into the minds of people who’ve survived and seen their own national tragedies. But the authenticity of these voices is lost in an inability to articulate them. As a viewer, I often think of the other end of the spectrum – those smart-looking but ultimately hollow Western appropriations of Africa – and wonder which one is better. The answer is not always obvious, but it’s there. These movies deserve the resources and opportunity to be better, all of which might have been available if not for the regime its makers rightfully criticise. The artists of the country were visibly pushed back a few decades by Aparthied – they know what to say, but the “how” might take some time, especially if one doesn’t pursue formal training in the West. I’m here for all the time it takes. Until then, one can only read the lips of films like Jewel.