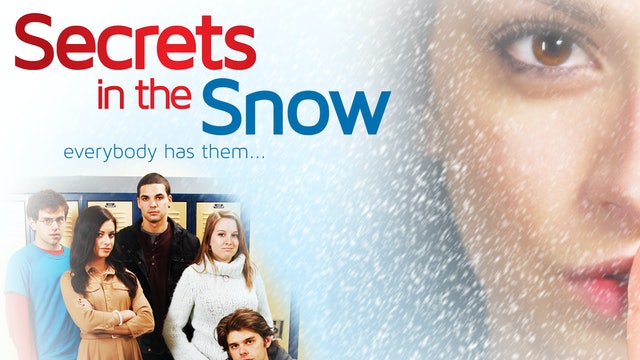 When Christina goes to meet her new boyfriend’s family, she finds herself thrown into a family drama surrounding the death of a family member.

The movie begins on a snowy dock. You might think this is a Christmas movie until you see a frozen dead hand in the snow.

Christina and her boyfriend, Ted, drive to his family’s home from Chicago for his mother’s boyfriend. They have been dating for three months. He is kind of annoying, and I’m not sure why she is even with him. They stop for some snacks, and Christina tries to talk sense into a junkie because she used to be one. Her boyfriend catches her and tells her just because she is a social worker; she doesn’t have to save everyone. They drive past a lake, and Ted shares that his brother died there recently and NOT to bring it up. I’m sure this family meeting will be smooth now.

Jonathan and Katherine greet their son and his new girlfriend. Jonathan suspiciously works in a basement on a project. The couple put their things upstairs in Paul and Ted’s childhood bedroom. It is weird and creepy. Ted’s sister, Nicole, and her husband, Jacob, are also staying for the weekend. They are unimpressed with Ted and Christina. Over dinner, they drink wine and talk about how dead the town is in the winter. When someone brings up the lake, it gets awkward. Then Christina shades the town rudely.

In the middle of the night, Christina sneaks downstairs to get her phone charger and is attacked by a masked stranger. Christina pushes that bitch in the snow. It is just Angie, Paul’s ex-fiance, and she comes over because of a power outage at her nearby home. Angie has been MIA since Paul died, and Nicole is bitter. Angie tries to make small talk and bond with Christina, but something is off. Ted and Christina have sexy time in his childhood bed. He literally says, “14 year old me is freaking out right now.” (Which is weird!)

Christina wanders around the house at night and runs into Nicole and then later Katherine. Since she is a social worker, Christina talks and listens to them deal with their grief. It might have been effective if the actress playing Katherine wasn’t so stiff. Yikes.

The winter storm gets worse and worse. It seems like everyone is going to be stuck together for a while. It is unfortunate because everyone is tense. Angie and Christina go to the basement to bring up supplies. Angie has a mini-breakdown where she admits that she cheated on Paul, and Christina consoles her. Angie implies that Paul killed himself, and Nicole blames Angie for his death. They run into Ted’s dad on the way up, and he was listening to their conversation.

Katherine and Ted offer Christina some cider, and shortly after, she starts to feel woozy. Christina goes upstairs to lie down and, on her way, tells Nicole to lose the attitude. Nicole is like, “MIND YA BUSINESS!” Then Christina passes out while talking to Paul’s empty bed.

Suddenly better, Christina takes the dog Ace for a walk in the snow. He digs in the snow and chews on a dead body. OH wait. It’s a dream. Christina wakes up and realizes she has almost slept through dinner. Then she snoops around more.

The dinner happens. Nicole and Ted light the candles on the cake and promise to stop fighting and make a special night for their mother. Then they sing “Happy Birthday” pitifully. Ted makes a toast to his mother, and they all drink wine. So that is fun! Nicole makes a speech, and when Angie wants to make a toast, Nicole freaks out on her in front of everyone. Christina interjects and goes all social worker mediator on the family. Nicole accuses Angie of killing her brother and reveals the cheating. Katherine’s birthday is ruined. Angie storms off to walk home, and Ted chases after her leaving his girlfriend behind.

The next morning Christina and Ted chat, and he is cold to her. He is angry with her and tells her that she doesn’t understand family because she has never had one, which is cruel. Christina plans on getting out of there ASAP, but he apologizes and asks her to be patient with him. (I would be so gone. No kisses from this man could keep me there.)

While Ted showers, Nicole and Jacob fill Christina in on everything. Ted and Angie were the ones having an affair. They think that Ted and Angie killed Paul to be together. Then they warn Christina to be careful. She heads out on her own to a local tavern that is “just down the street.” Haha, she starts drinking because what else are you going to do.

Christina next goes to Angie’s house on foot. Angie welcomes her in and goes to make some tea. Christina hears a commotion and grabs a fire poker; she heads to the kitchen and sees Angie unconscious. Ted pops out and attacks Christina. He tells his girlfriend that he is using her to make Angie jealous. He planned to cut Angie’s power and get them to meet and win Angie back. Christina hits Ted with a teapot and runs out on the lake. Ted chases after her with an ax and hits a soft spot in the ice and drowns. Before he falls he tells her that she can’t save everyone.