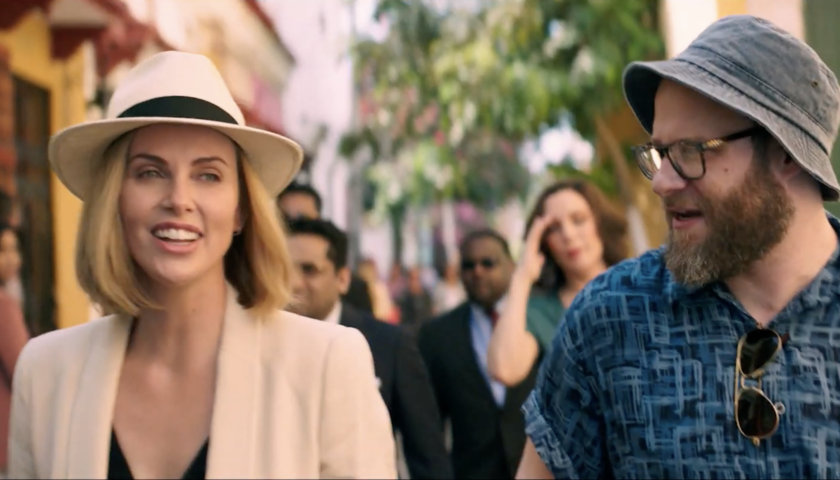 Review: Comedies like director Jonathan Levine’s Long Shot should never be taken seriously, and you shouldn’t question giving yourself over to suspended disbelief. This is a comedy, after all, and doesn’t ask you to take the actual day to day politics earnestly, but just the sentiment behind them. Levine’s romantic comedy has its gross-out moments, being held together by the leads that give the film some unexpected heart.

The film starts with Madam Secretary Charlotte Field (Charlize Theron), who is seeking an endorsement from POTUS (Better Call Saul’s Bob Odenkirk) who has decided not to seek a second term, so he can use his one-term stint to push his popular television career into films. Charlotte is youthful, ambitious, accomplished, and the only thing she has for a personal life is a media-created romance between her and the Canadian Prime Minister (Alexander Skarsgard). Field decides to hire an outspoken reporter named Fred Flarsky (Seth Rogen), who she happened to babysit as a teenager, after a chance run-in. Flarsky has a unique voice and a dogmatic attitude that has just gotten him a place in the unemployment line when he objects to a big-time media conglomerate buying out the paper he writes for. Naturally, as the film moves along and the preparation for the campaign continues, the shenanigans will follow.

The film was written by Rogen and Evan Goldberg. This is their eighth collaboration and the second script Levine has directed from the comedy duo. What separates this Rogan comedy from others is not only the chemistry between the leads but with the entire supporting cast. O’Shea Jackson Jr as Rogen’s best friend since childhood feels like an old friend while creating just as many laughs as the leads. Odenkirk is a standout as a former television star who uses the presidency to improve his own well-being outside the office (sound familiar?). Veteran comedy-character actress June Diane Raphael (Burning Love) is also worth mentioning as Field’s guard dog and campaign manager Maggie Milliken.

Long Shot, yes, is a broad comedy that can tend to go for a few gross-out gags, but has a sentimental side that is on full display because of the talent of Theron. A scene with her dancing with Rogen is unexpectedly charming and is surprisingly sweet, before coming out of nowhere with unexpected belly-laughs. While Rogen is more mature than expected, anyone who saw Theron’s guest stint as “Mr. F” on Arrested Developmentknows she has the comic chops to carry this role and then some. If you are in the crowd that says the star of Observe and Report couldn’t win over Theron with his charms, remember that Mel Brooks landed Ann Bancroft, Julia Roberts married Lyle Lovett, and lastly, my wife has to look at my mug every day (lesson for all of you out there: never pass up a chance to build up bonus points).

Long Shot takes comedic aim at the current administration, big business interests, and a cable news channel named after a small, dog-like wild animal with pointed ears (Paul Scheer, always good for a sleazy laugh or two). With its ideals coming from a time of great political unrest and has a modern-day pulse with an overall message of change while allowing us to laugh our troubles away. While the film is about 20 minutes too long, Andy Serkis’s Parker Wembley is practically cartoonish, and an over-sentimental ending that could have gone a different way, it’s an unexpected treat that offers some relief from today’s modern political angst.