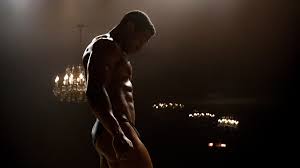 “Bodybuilders can’t have scars,” says Killian Maddox (Jonathan Majors) in writer-director Elijah Bynum’s Magazine Dreams. Killian’s body certainly seems flawless, even though he continues to improve things he believes to be imperfections—he’s been told his deltoids are too small, and no matter how hard he tries, he can’t build more muscle in his legs. But Killian has plenty of scars inside, pains from his past he tries to push aside, frustrations with not being able to connect with other people, and a focus on improving himself to a degree that could be his downfall.

Killian wants to be remembered, ideally as a bodybuilder who can get on the cover of a magazine and win world championships. But mostly, he just wants to not feel invisible. He wants to make his mark on this world. While the other bodybuilders in competitions look at ease as they tense and pop every muscle in their toned bodies, Killian looks like he’s trying as hard as humanly possible—he’ll flex and fight with every ounce of muscle he has to have the spotlight shine on him, yet no matter how hard he tries, it never does.

When watching Magazine Dreams, it’s hard to not feel like Killian: tense and struggling with every move. Magazine Dreams is two hours of draining intensity, the type of exhaustion from watching a person self-destruct that hasn’t been seen since Uncut Gems. Killian is an easy character to sympathize with, a lonely man who just wants some attention, but Bynum’s continuously pushes the audience to stay on his side, seeing how hard he can test their allegiance he goes deeper down his rabbit hole. And what a rabbit hole it is. What begins as a character examination quickly turns into scene after scene of Killian’s life getting worse. Even when you think this character has hit rock bottom, Bynum laughs in your face and shows the audience a whole new lower level Killan is now fumbling towards.

Majors gives an incredible performance here, easily the best example so far in his filmography that he is a tremendous talent to be reckoned with. This is essentially Majors’ opportunity to take on a Travis Bickle-esque character, and he relishes the opportunity. Majors is giving every part of himself in this role, from his sculpted body to what must have been a remarkable mental exhaustion, and the audience can feel inherently just how much he’s giving in every scene.

While there is rarely a moment when Majors isn’t the center of Magazine Dreams, the excellent characters that he meets along this journey of destruction emphasize the sadness and pain within Killian. Haley Bennett only has a few scenes with Majors, but with one scene in particular, she shows through her mannerisms just how quickly someone can turn from being on Killian’s side to knowing they need to get away from him. Similarly, Taylour Paige, who is also only in a few scenes, highlights how Killian is really just a scared boy inside, wanting the love that he’s been missing for so long.

This is also just a stunning film to look at, as Bynum is working with cinematographer Adam Arkapaw (The King, Animal Kingdom), who enhances the darkness in Killian’s world, but also makes the audience understand the beauty and power of bodybuilding and the human body itself. The lighting here is stark and uncomfortable, only heightening the pain of Killian’s story.

However, the biggest issue in Magazine Dreams is how Bynum discusses Killian’s very clear mental health issues. We first meet Killian at a therapist, who asks him to explore his rage, as he gets migraines, has nightmares, and hears voices. He recently got in trouble for saying he would split someone’s head open and drink their brains. So, there are clearly some issues that he needs to work out. Despite the therapist being a helping hand that wants to assist, he brushes off any attempts at help from her and from others. Bynum’s overall theme seems to be that we all need to be kinder and give a helping hand when we can, yet his narrative here also proves that that isn’t all that’s needed. Several characters attempt to help Killian, but he’s a character that is understandably difficult to be around, given his situation.

Which, this also does mean that at times, this does feel like Bynum testing the limits of a person with mental health issues that need to be addressed, which is certainly an issue. Bynum shows that there needs to be better mental health services for those in need, and also shows how someone who needs help could go down this dangerous and terrifying path that Killian walks down. Once again, it’s a testament to Majors’ performance that despite the shaky and questionable handling of mental health here, he still makes this character intriguing and compassionate throughout the film. Even when he’s at his worst, we understand what brought him down this path of self-destruction and destruction in general.

Magazine Dreams is a difficult and challenging watch, bolstered by an incredible performance by Majors that could easily end up being one of the year’s best. As we see in the bodybuilding competitions that Killian competes in, after every flex, they’re told to relax, but it’s nearly impossible to relax through the two hours of immense trauma and struggle that Bynum puts before us.