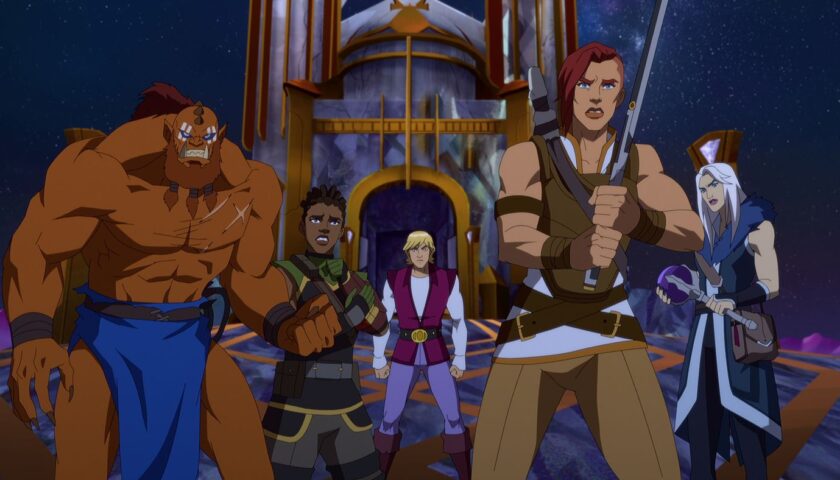 Masters of the Universe: Revelation wraps up its layered, rewarding, character-driven take on He-Man and his pals with a dazzling five-episode display of animation and heart, though the story slightly slips a notch during its endgame by getting a little lost in the sorcery sauce.

Fortunately, the actual “rules” and lore (which has been greatly expanded upon, if not flat-out created, for this series) aren’t the overall focus of Revelation. The standouts here are the twists, bends, and tweaks to the (admittedly flat) original narrative of the original ’80s series. It’s the deeper exploration of these characters — including inner conflict, doubt, and fear, along with flashback dives into the past for further sympathy-building context — that steal the show. All the explanations about Eternia, the universal power, the Sorceress’ role, the Power Sword’s actual use, and more are (fortunately) just cake decorations that ultimately don’t matter as much as the people.

This doesn’t mean, however, that it’s not a touch frustrating when the magical lines all begin to blur and the scope of characters’ power seems to change every few minutes. Most of this happens during the finale’s final battle, but it’s also present a bit beforehand when the show struggles to differentiate Skeletor’s evil machinations from Evil-Lyn’s. A lot of the motivations pertaining to the diabolical use of sorcery feel like placeholders, but nothing better ever comes along. Still, even though everything becomes a swirl of “make-em-ups” toward the finish, the personal character moments shine brightest.

When we last left off, a self-exiled Teela and a ragtag crew of newbies, heroes, and villains succeeded in bringing Prince Adam back from Preternia, only to discover that Skeletor’s soul had been hiding in Evil-Lyn’s scepter the entire time, ready to flip the table when the time was right. Now we’ve got “Skelegod,” a new enhanced form of Skeletor (same old petty vibes) and our champions must contend with a powered-up Super Shredder version of their old foe.

The insta-threat of Skelegod has all the makings for an interesting back half of Revelation, but the show’s smart enough not to rest on just that. Without spoiling too much, Skelegod doesn’t last very long and fairly quickly, a new (and way more interesting) danger arises to wreck everything, enabling — yes — the crazy team up you probably never thought you’d see.

For those who didn’t enjoy He-Man taking an extreme back seat during the first five episodes, Prince Adam’s mighty alter ego returns for these chapters, though not without a few fun changes to the formula (including the primal results of what happens when Adam tries to summon power without his sword!). But while Adam/He-Man returns as more of a participating element, it’s Sarah Michelle Gellar’s Teela and Lena Headey’s Evil-Lyn who get the best treatment here.

Both of them are given rich backstories, secrets, and destinies while being set on a collision course of sorts. And it’s all made more meaningful because of who Evil-Lyn was during the first half of the series when she teamed with the good guys to save the universe. Revelation’s game plan was always to expand and deepen, creating a fuller world by fleshing out supporting characters who were usually relegated to sidekick/henchman status. And this acts as chain of vindication. By benefit of Evil-Lyn’s development, Beast Man is able to ascend as well. Likewise, Teela’s various narrative enhancements allow for Duncan to have meaningful moments.

Revelation’s ending leaves room for more, for sure, but one of the drawbacks to going so big with your climax, and playing so loose with your magic, is that it’s hard to touch back down to Earth (or Eternia in this case). That being said, we’re definitely set up with a “reboot” of sorts, with some new characters filling old roles and a better understanding by all involved of creating a system that works. The old model of Adam keeping He-Man a secret failed, and in doing so it caused ripples of resentment that broke bonds and busted marriages. It’s almost as if all the fire and fury of Revelation was just to get everyone to a better place emotionally — even the villains.

Masters of the Universe: Revelation continued on its path of rich characters, eye-popping animation, and terrifically twisted tweaks to the old He-Man formula. The magical ground rules get even fuzzier in this back half, however, feeling arbitrary at times. But in the end, the show exists to make us care about characters we never did previously while also reshaping Eternia, and all who reside there, good and bad, for the better.