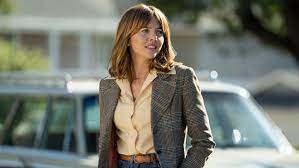 “Minx,” a new comedy on HBO Max, has a plot that’s all about reversing the gaze — looking as pruriently at men as media often looks at women. And the form of the show follows suit.

In order to tell the story of Minx, a new magazine launching in this show’s depiction of a swinging 1970s, this series refuses to hold back, diving deep into a curiosity about the male form that’s as gently inquisitive as it is prurient. The engine of the show is the partnership between Joyce (Ophelia Lovibond), who hopes to launch an earnest journal of feminist ideas, and Doug (Jake Johnson), the porn-company mini-magnate who’s the only publisher willing to give Joyce a shot. After a chance meeting forges a partnership in the pilot, they’re off to the races. And in morphing Joyce’s magazine into something more playful and more openly erotic and bringing her along to nude model castings, Doug gives Joyce an education in the variety of human experience, and of human organs.

Which places “Minx” among a recent wave of series featuring extensive male nudity, including, notably, “Euphoria;” here, though, there’s a sweetness to the endeavor. All the flesh we see helps illuminate the stakes of the Joyce/Doug relationship — what he’s giving her, and what she’s giving up. Joyce, bolstered by her belief that there is a market for starchily ideological journalism, finds herself seduced as much by Doug’s dedication to putting out a quality publication as by his libidinous ethos. And Doug sees much to admire in Joyce’s doggedness, even if his politics extend about as far as giving everyone, male or female, fantasy material.

Both Joyce and Doug are compromising — her far more so — in order to put out their magazine. Which means that the show “Minx” most recalls is its HBO Max sibling “Hacks.” The first five episodes of the pleasantly low-key “Minx” don’t reach the heights the Jean Smart-led comedy did last year, but its animating idea of a newcomer to the media industry pushing, and being pushed by, a veteran with a set idea of what is possible is familiar. It works.

So, too, does the world “Minx” builds, a community of outsiders who share an interest in living slightly outside the rules of propriety. Jessica Lowe, Idara Victor, and Oscar Montoya are all very strong as members of the magazine’s staff. And though a storyline involving Joyce’s sister Shelly (Lennon Parham) finding herself an identity beyond suburban motherhood engages some cliché about life for homemakers in the era — with Parham playing a fairly broadly defined type — there’s a bigheartedness to the way Shelly jumps into the world of Minx magazine.

In the end, though, the show is about Lovibond — and the loving bond she forms with Johnson. The Joyce character is on a tricky tightrope, learning to embrace the ways in which left politics can be expressed in fun and physical ways without being asked to ditch who she is. And Lovibond shows this evolution, and the bumps along the way, in a shrewd and charming actorly duet with Johnson, who finds within the role just the right level of midcentury sleaze to compel us to keep watching.

Johnson’s empathetic but tough performance makes clear who Doug is, and the complicated motivation that lies behind his scruffily direct exterior. Doug doesn’t want to wholesale change who Joyce is: He just wants to bundle her ideas, Trojan-horse style, into a package that women outside the academy will embrace. That this repackaging means opening Joyce up to new experience comes to seem like more than a fringe benefit. And that it means having an ongoing conversation about political and aesthetic beliefs mean that, for Joyce, a newly sensual outlook is not the only form of pleasure she’ll find at work. For all the bodies on display, “Minx” is, happily, turned on by the life of the mind.