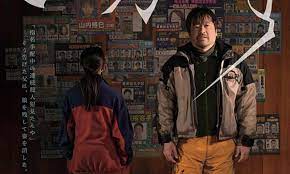 Shinzô Katayama learned from the best, filling the role of Second Unit Director on Bong Joon Ho’s startling Mother. He applies much of that film’s family drama/murder mystery theme for his own thriller, Missing.

Kaede (Aoi Itô) is a little fed up looking after her father, Harada (Jirô Satô). His depression and debt have only worsened since her mother’s suicide. She’s tired of being the grown-up. So tired of it that she dismisses his plot to track down the serial killer “No Name” for the reward money. When he disappears, she wishes she’d taken him more seriously.

Missing plays in parts, and Part 1 takes on the frustration and fear of Kaede’s story. Itô convinces as the child maneuvering in an adult world, complete with the frustrations, condescension and outbursts that involves. The performance never leans toward sentiment, never asks for our sympathy, and is the more fascinating for it.

Veteran Satô has no trouble finding an empathetic approach to a character in over his head. Satô complicates this questionable but lovable father figure. Harada is never an outright simpleton, always a loving family man. But he’s very, very flawed.

We get Harada’s side of the story, too, but between the two we see a bit from the perspective of No Name (Hiroya Shimizu). After establishing a layered, tense drama, Katayama, who co-writes with Kazuhisa Kotera and Ryô Takada, pulls the tale back toward horror.

Shimizu’s oily performance glides from apathy to curiosity to insincerity to sadism with unsettling ease. You root for the separated daughter and father, clearly out of their depth, but Katayama’s vision is more complicated than that.

Katayama allows moral ambiguity to enrich the film, knocking you off balance and unsure of your alliances. Three strong performances keep you intrigued and guessing, but the filmmaker surrounds them with an assortment of oddities. No character in the film is truly flat, everyone is a surprise.

Buried in this heady mystery is a thread about justice in the face of self-interest and the surprising joy of ping pong. It’s an engrossing feature debut from a director who knows how to play you.