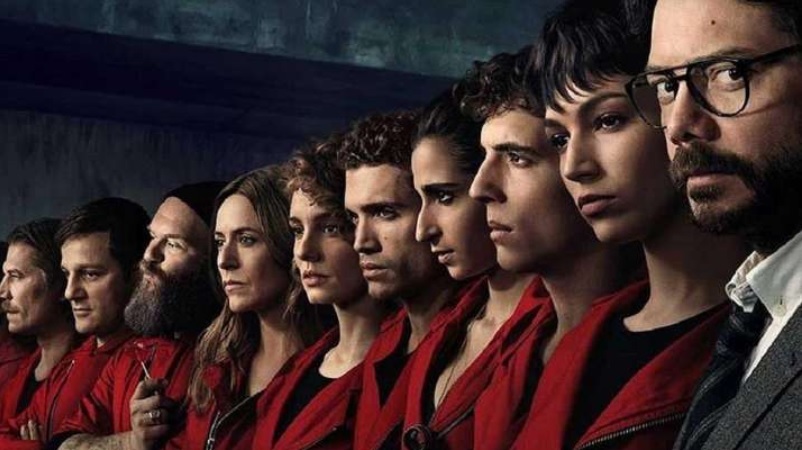 It’s that time of the year when a random Indian youth will play a modern remix of an Italian antifascist song on repeat. It’s that time on social media when manoeuvring through spoilers seems like a serious task. It’s that time of the year when names of certain famous cities mean much more than being just tourist destinations. Well, Tokyo isn’t trending on social media just because it is the venue for the recent Olympics and Paralympics. Basically… the gang of Salvador Dali masks-wearing thieves is back for the final season of Money Heist, and they have clearly pulled out everything from their arsenal. We begin exactly from where we left off in the fourth season.

The disgraced police inspector Alicia Sierra (Najwa Nimri) traps Professor (Alvaro Morte) in his hiding spot as the gang continues to melt gold and execute the exit plan of the Bank of Spain heist. Adding to the gang’s misery is the ruthless, crooked Colonel Luis Tomayo (Fernando Cayo), who plots a no-holds-barred military mission to end the never-ending heist. The season begins with showering bullets and doses of edgeof- the-seat suspense, and we are also reacquainted with the screenwriting pattern this show has become famous for.

In one of the many flashbacks of the primary characters, we see the late Berlin (Pedro Alonso) meet his son and teach him the art of ‘ a Berlin heist’. But the most interesting of the flashbacks is reserved for Tokyo (Ursula Corbero). We finally know how she lost her ex-lover Rene (Miguel Angel Silvestre), and how she was recruited by the Professor (Alvaro Morte). Thankfully, these flashbacks are not bloated and only give us sufficient information.

However, Money Heist continues to suffer from not knowing when to reel us back to the thick of the action — the Bank of Spain heist. But the writing of the central plotlines shows us why this show is revered all over. For example, at a crucial moment, Inspector Sierra has to face one of the toughest choices of her life that involve her unborn baby and Professor. Nimri and Morte do what they do best to shoulder these scenes, and one can be certain that their equation will play a major role in the last volume. Moving to the heist, our notso- favourite character Arturo (Enrique Arce) does what he has always managed to do, and continues to annoy us through a poorly-planned coup, just when the Colonel’s military mission begins on the outside.

Adding to the high from such predictable events, the unexpected twists and growing tensions too are a treat. Credits to the writers for making the action and dialogues seem more realistic this time around. Even the quests of the characters seem more believable, and the danger more imminent. The relationships that are established and the ideas explored continue to be impressive. The showstopper, however, is Tokyo to whom the entire volume seems to be dedicated. From her origins to her actions in this mission, Tokyo’s presence is magnetic.

In fact, the makers have shone more light on the women gang members this season. For example, the show takes a deep dive into Monica’s (Esther Acebo) mental makeup when the demons of her past come haunting. Where she goes from here would be quite an interesting arc. Similarly, we see Julia aka Manila (Belén Cuesta) speak about how her father didn’t accept her trans identity. She embraces her identity and takes leaps of faith and love. The way she carries herself, especially through the vulnerable moments, shows a lot of strength and all credits go to the writers and Cuesta for giving us Manila.

However, certain screenwriting decisions are poor and don’t work for the show. It’s unsettling to see a bunch of stonecold thieves allow their emotions to best them at pivotal moments. Take, for instance, the moment where Tokyo manages to get into the head of the unempathetic Gandia (José Manuel Poga) or the dramatic exchange between Manila and Denver (Jaime Lorente). Such things do make for good drama and to further the plotlines. However, with so many plotlines and backstories being part of this volume, there is a fear if these developments are a precursor to the exits of certain characters. Although a Money Heist season without deaths is too unlikely, things do get a little queasy halfway into the show.

This season also has a fair amount of quirks and creative metaphors that keep us engaged. For example, throughout the season, the characters compare the happenings to that of football. When Palmero (Rodrigo de la Serna) says that at the World Cup final, the weaker side shows fear when they sing the national anthem, Rio (Miguel Herrán) points out that their team has only ten players (hinting at Nairobi’s death) and that the opponent has 10,000. There is also a killer line from Arturo about Messi, Neymar and Cristiano Ronaldo. With just five episodes in Volume 1, we know that the final volume is bound to be overwhelming. There are still loose ends, and a lot more things to be resolved. But for now, it’s time to sing Bella Ciao with Professor, Tokyo, and the team in red, and hope for the best.