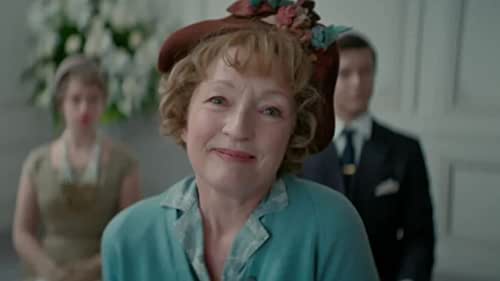 Long before Emily went to Paris to stoke everyone’s fantasies, and found herself awash in clichés and controversy, the fictional widow Mrs. Harris struck out to the glittering city for her own fantasy: To own a couture Dior dress.

Mrs. Ada Harris is the protagonist of the upcoming film “Mrs. Harris Goes To Paris,” which is an adaptation of the quietly loved book, 1958’s “Mrs. ‘Arris Goes to Paris,” by Paul Gallico. It’s something of a Cinderella story — if Cinderella was a widow and had no fairy godmother, but a dream of owning one of the most beautiful dresses in the world. The fashion-centric period piece takes on 1950s Paris, promising a beautiful spectacle of haute couture.

The film is directed by Anthony Fabian, with Lesley Manville starring as Ada Harris. While it’s been adapted on screen before, this will be the first time it’s getting a theatrical release. Here’s everything we know about “Mrs. Harris Goes To Paris.”

So, when exactly will Mrs. Harris go to Paris? The movie is all set to hit theaters on March 4, 2022, according to The Hollywood Reporter. A week after that, it will hit the international market. Focus Features is distributing the movie, which was made in conjunction with House of Dior.

Shooting began amidst the COVID-19 pandemic last October in Budapest, Hungary, which is being used as a double largely for Paris. However, the cast and crew spent a few days in London and Paris to finish filming the iconic spots, co-producer Jonathan Halperyn told KFTV.

This isn’t the first adaptation of Paul Gallico’s 1958 novella. It’s been made into three different TV films, with the most recent being from 1992 with Angela Lansbury and Diana Rigg. More recently, Mrs. Harris went to the theater in 2016, in a musical stage adaptation titled “Flowers for Mrs. Harris.” They did an official cast recording of the soundtrack in 2020, so those impatiently awaiting the film can listen in the meantime.

In the starring role of Ada Harris is English actress Lesley Manville, who’s not new to the setting of the 1950s haute couture scene, having earned an Academy Award nomination for her part in the historical fashion drama “Phantom Thread.” Next, she’ll be playing Princess Margaret in Seasons 5 and 6 of “The Crown,” so period piece fans may see her there as well.

Alongside Manville is the French actress Isabelle Huppert, who plays Claudine Colbert. While she’s most known in the French film scene for movies such as “The Piano Teacher” and “Elle,” she’s lauded as one of the best actors in the world. The New York Times listed her as second in their 2020 roundup of “The 25 Greatest Actors of the 21st Century (so far).”

Rounding out the main cast is Jason Isaacs (Lucius Malfoy in the “Harry Potter” movies) as Archie, Lambert Wilson (The Merovingian in “The Matrix” sequels) as Marquis de Chassagne, Alba Baptista (the star of “Warrior Nun”) as Natasha, Lucas Bravo (Gabriel from “Emily in Paris”) as André Fauvel, and Rose Williams (Claude de Valois in “Reign”) as Pamela Penrose, according to Focus Features.

“Mrs. Harris Goes to Paris” puts the plot right in the title. As the logline from Focus Features states, Ada Harris (Lesley Manville) is a “widowed cleaning lady in 1950s London who falls madly in love with a couture Dior dress, and decides that she must have one of her own. After she works, starves and gambles to raise the funds to pursue her dream, she embarks on an adventure to Paris which will change not only her own outlook, but the very future of the House of Dior.”

The story has been described as something of a fairy tale, though it’s unique for having an older protagonist. Mrs. Harris may be nearing 60, but she’s a dreamer, and the story’s got charm. In fact, her character was so beloved that the original “Mrs. ‘Arris Goes to Paris” is actually the first of four novels. In the others, she goes to New York, Parliament, and Moscow. But first, to Paris!