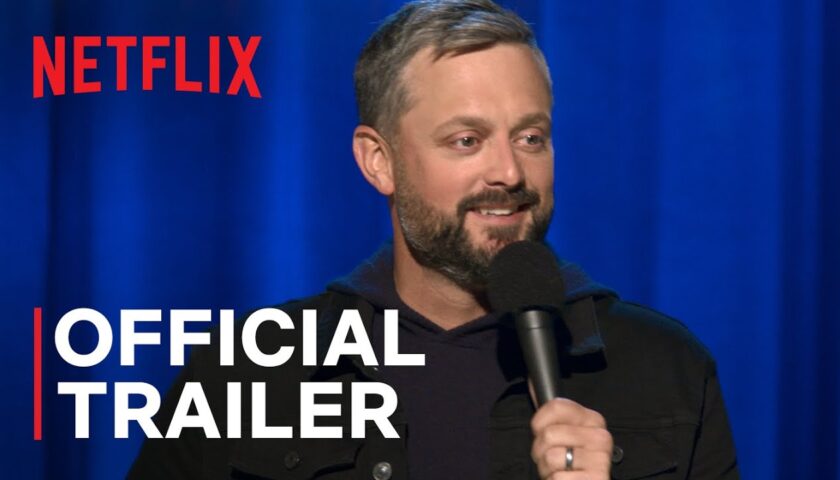 Filming a comedy special outdoors while helicopters whir overhead might present problems for most stand-up comedians. But Nate Bargatze isn’t most comedians. As he titled his second hour-long Netflix special, he’s The Greatest Average American. He may also be the greatest affable American.

The COVID-19 pandemic may have shut most live comedy down completely for the past year, but it didn’t stop Nate Bargatze.

Bargatze was one of a handful of stand-ups who continued to tour in 2020, performing at drive-in movie theaters, parking lots and even inside the comedy clubs that chose to reopen last summer and fall. He filmed a Tonight Show set that aired in October from Stand-Up Live in Huntsville, Ala., marking his eighth performance on Fallon’s show (Nate has been Jimmy’s favorite since opening for Fallon on the road in 2013). The Greatest Average American is Bargatze’s second hour for Netflix, following his stellar 2019 special, The Tennessee Kid. You may also remember seeing him perform in shorter sets on the streaming giant in 2017 (a half-hour for The Standups collection, and a shorter set for Brad Paisley’s Comedy Rodeo), or his first hour debut on Comedy Central in 2015.

For this hour, filmed outdoors at the Universal Studios Hollywood lot, he jokes about what it has been like performing during the pandemic, argues why his “Oregon Trail” generation enjoys the best of both worlds, and reflects on his 20-year relationship with his wife and what parenting feels like now. His daughter, Harper, introduces him just as she did in his 2019 special, only distanced via iPhone this time around. And as Bargatze jokes, his daughter is glued to her iPad. “She wants to be a YouTuber, which as a comedian, makes me furious.”

What Comedy Specials Will It Remind You Of?: Have you not yet watched The Tennessee Kid? Why not?! It’s great! Do you enjoy self-deprecation, but even more when you realize the comedian actually knows whats they’re doing? Then you’ll understand and appreciate Bargatze even more.

Memorable Jokes: One of the benefits of continuing to work during the pandemic? Bargatze has a full hour of new material, including bits about working in a pandemic!

He makes fun of his parents for their habit of doing the one thing that’s no longer remotely socially acceptable (coughing in public), of public policy that has teenagers taking temperatures at the front door of chain restaurants, and of himself for no longer having an excuse to work out with his neighbor in his driveway. Having performed at drive-ins last summer made him nostalgic for comedy clubs, because it’s much more noticeable when a car decides to leave mid-show. Bargatze also has a bit about pranking his own opening act, actor Nic Novicki (Boardwalk Empire), which has an extra payoff during the closing credits.

We learn how Bargatze met his wife 20 years ago when they both worked at an Applebee’s, and he also has jokes that remind you of the unique wonders of Chuck E. Cheese.

The Applebee’s memory is one way for Bargatze to remind us that he doesn’t think of himself as a smart guy, which he plays up as he relates the story of trying to help his daughter with her Common Core math, and realizing he’s learning new things at age 41 through third-grade homework.

But he also reveals in this new hour that in his youth, he suffered three concussions, one of which at 12 years old resulted in an amazing life-saving story thanks to strangers who happened upon him at Old Hickory Lake outside of Nashville. There’s even more to his story than he realized.

As much as I bring my own perspective as a member of Generation X to any review, I also can thoroughly enjoy and respect the ideas offered by comedy kids these days. Even if they’re only a little bit younger.

Bargatze, born in 1979, jokes about how his cohorts are considered in-betweeners, classified as Xennials or the “Oregon Trail” generation, but he calls them “The Lucky Ones” because they still got to experience a youth without advanced technology while growing up in tune with changing tech. And several of his routines play with his placement between those two worlds. Whether he’s in an airport suddenly without his iPhone, or whether he’s in a hotel, dealing with all sorts of problems.

But he demonstrates his flexibility most acutely and expertly with something he hadn’t quite planned on at all during his taping: Multiple interruptions by helicopters passing overhead Los Angeles County. They could’ve easily edited one or all of them out. Bargatze is so affable, however, so adept that he makes the most of these moments, turning them into ad-libbed conversations with his outdoor audience that endear them even more to him.

I, for one, cannot wait.