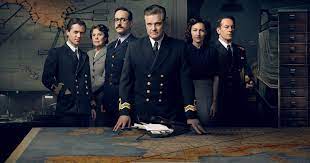 Naval intelligence officer and aspiring novelist Ian Fleming (the British writer who gave us James Bond) narrates and has a supporting role (played by Johnny Flynn) in Operation Mincemeat. And while there is no shortage of espionage and spy tales centered on World War II, such a presence ruminating on the hidden side of war (movements in the shadows, double agents, seduction, deception, etc.) injects director John Madden’s depiction of these real-life events (working from a terrific script by Michelle Ashford that’s adapted from Ben Macintyre’s book) with a mounting tension suggesting that this too-crazy-to-work undercover mission he is a part of is directly partially responsible for the birth of 007. It’s not something that’s spelled out (even the ending credits don’t have a footnote detailing his eventual world celebrated success), and this is not even the first World War II story to feature Ian Fleming, but it’s all worked in an appropriate angle to elevate the uncertainty and poetic drama without becoming a distracting sideshow.

Adjacent to Ian Fleming is British intelligence officers Ewen Montagu and Charles Cholmondeley (Colin Firth and Matthew Macfadyen, outstanding at selling the insanity, risks, danger, and urgency of what they are tasked with and what they are up against and how quickly it could all go south), who has pitched an idea to Admiral John Godfrey (the screen-commanding Jason Isaacs) of diverting German troops away from Sicily (which they plan to attack) into Greece so that they can effectively pull off an ambush and mark a turning point for both Europe and the Allied forces. That plan involves parachuting a dead body off the coast of Spain and planting a false identity and documents pointing to an attack in Greece, serving as a misdirection. No one has much confidence it will actually be successful, but Simon Russell Beale’s Winston Churchill has given that the green light, hoping for the best.

The first, much more creative and involving, half of Operation Mincemeat sees the two intelligence officers doing everything from finding a suitable body (settling on suicide victim Glyndwr Michael) who would be credited as a war hero) to crafting an elaborate backstory for their chosen dead man. This involves photographs, letters, and a fully fleshed-out life that unsuspecting Nazi officers will buy into, subsequently assuming that the attack on Greece must be legit. However, it also means creating a love interest back home and another fake identity altogether, which comes to be a fake identity for secretary Jean Leslie (Kelly Macdonald), known as Pam.

Not only do these elements slide right into the Ian Fleming framing device and narration, but it allows for some deconstruction of military soldiers and the call of duty as the trio weaves together a believable fictional character. There’s also an aspect of Ewen’s complicated family life, which only becomes further messy as he and Jean fall for one another, with bits and pieces of their creation standing as real feelings and thoughts about one another. Ewen also doesn’t bring up his family; his knack for deception can also bleed into his personal life. However, he’s not necessarily a bad or manipulative person, but somewhat confused and stressed during the whole ordeal.

Once it’s time to execute Operation Mincemeat, the proceedings shift into something more conventional, but the filmmakers deserve plenty of kudos for maintaining intrigue and suspense in several ways. The intelligence officers have to make absolutely sure a high-ranking Nazi officer opened the letter detailing the deception. There is a secret rebelling against Adolf Hitler manifesting that could be reality or nonsense rumors, and the Admiral (who doesn’t have much faith in the mission from the beginning) is mostly only going along because he can use the situation to his advantage by studying whether or not Ewen’s brother (Mark Gatiss) is a Russian spy. Jean also befriends an American soldier who may not have much screen time but factors into the story thoughtfully in other ways given the dual roles of Lorne MacFadyen (who also plays Glyndwr Michael’s corpse).

Outside of a glimpse of battle during the climax, nothing is inspiring about Operation Mincemeat from a craftsmanship standpoint, although there is a rousing and moving score from Thomas Newman. Beyond that and the strong ensemble here, that’s all the film needs. The concept carries this one far, especially considering the film is primarily fixated on problem-solving and what could go wrong. The human drama at play is relatively routine, but the operation is stirring.