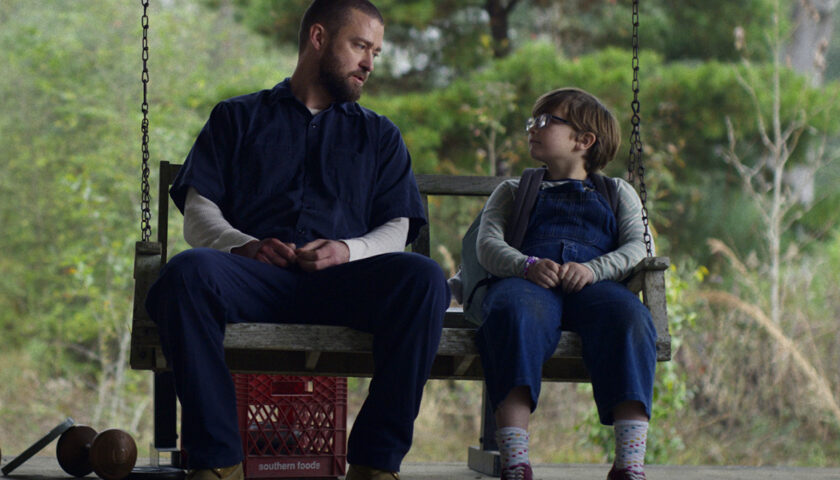 Sometimes, nice isn’t good enough. Palmer is a perfectly adequate, at times engaging, drama about a man with a past who learns to care for a troubled, sensitive young child, but all along it teases you with the far more powerful film it could have been. It’s also a good example that not all actors — as talented as they might be — can salvage parts that don’t give them enough to do.

The film follows Eddie Palmer (Justin Timberlake), a former high-school football star who has just gotten out of prison (for a robbery and assault charge) and has returned to his Louisiana hometown to rebuild his life. Moving in with his grandmother Vivian (a charming June Squibb), Eddie is intrigued by the family living in a trailer on her property: strung-out Shelly (Juno Temple), her abusive boyfriend, and her sensitive, kindly young son Sam (Ryder Allen), whom Vivian seems to take care of much of the time.

But then Shelly vanishes. And then Vivian dies. And suddenly, Eddie finds himself responsible for young Sam, whose situation presents something of a challenge for a guy like him: The boy is fond of princesses and makeup, and gets picked on mercilessly. And not just by other kids. Eddie’s friends — a macho gaggle of beer-guzzlin’, pool-playin’, bar-fightin’, football-watchin’ good old boys — also express disdain for the kid. Eddie himself at first doesn’t know what to do with this child who doesn’t seem to be anything like him. But, working as a janitor at the local elementary, he gets to see firsthand the rough time Sam has at school, and begins to have thoughts of trying to adopt the boy.

It’s not hard to tell where the story is going, and Eddie’s emotional transformations are a foregone conclusion from the earliest scenes of the film. Director Fisher Stevens and screenwriter Cheryl Guerriero certainly know how to push our buttons: We’re rooting for Sam, and we’re rooting for Eddie, and there are a few characters here we wouldn’t mind seeing get punched in the face, and one of them even does. Timberlake is not a bad actor, and he’s certainly a likable guy. Eddie’s reserve means that he rarely emotes, so it helps that he’s being played by someone pleasant to look at, who exudes a kind of aw-shucks niceness, even if that’s not exactly what the role calls for.

But this is also sort of the problem. With such predictable broad strokes, and such an undernourished story, Palmer requires a truly great performance to give Eddie the kind of dimensionality and inner life that will pull us into his world. The character’s tense reticence is his constant response to a world that is at times confusing, enraging, and heartbreaking, and that’s understandable — it’s sort of the point of the film, in fact — but after a while it can also feel tragically one note, as if he’s just always giving the same face no matter what the situation. As an actor, Timberlake is generally at his best when he goes big (which is also why he should do more comedy). Based on the evidence here, he doesn’t quite have the dexterity or subtlety to layer glimpses of emotion into such a quiet, submerged character. (For an example of what another actor can do in similarly constrained circumstances, albeit in a much different movie, watch Ralph Fiennes in The Dig, where he plays a buttoned-down type and yet gives us something new every time the camera catches him.)

Again, Palmer isn’t a bad movie. It’s decent, in more ways than one, with its heart in the right place and a couple of moving moments. Like so much of what we’re getting nowadays, it’ll pass the time, which may be all you need as you watch it on Apple TV+. But it clearly aspires to more, and it clearly could have been more.