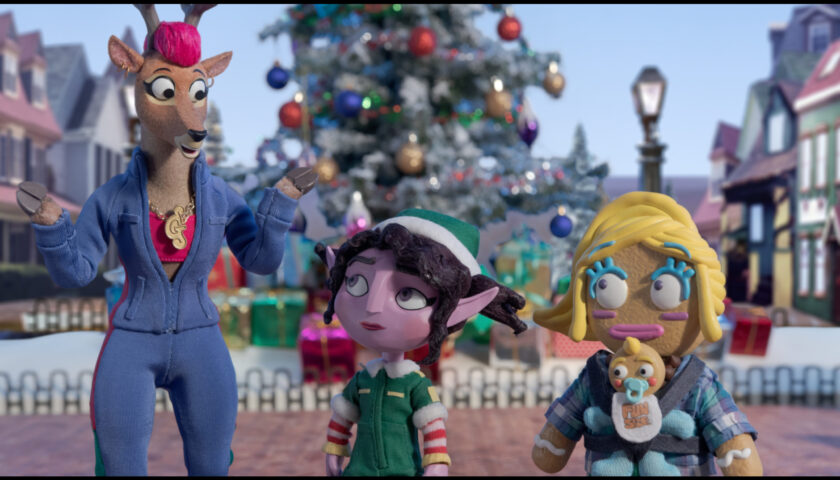 Old actors trying to connect with a younger generation that has heard it all before. We’ve all seen this behavior of trying to be cool from one generation to the next, but it’s always the oblivious that repeat the mistakes of their parents. The whole kitchen sink was thrown at this series; feminism, diversity, white privilege, and toxic masculinity. It’s so exhausting listening to an old generation of people try to explain these concepts to us. Why couldn’t they just make a funny thing about Christmas that speaks to everybody? Seth Rogan has a sense of humor that’s better used for dive bars and poker games.

It didn’t work for his hotdog movie and it doesn’t work here. Cussing for sake of seeming cool, is like hanging out in your old high school parking lot smoking a joint… Seth thinks to himself, “These kids are gonna think I’m so cool.” – The reality is that the generation you’re talking to doesn’t care what you have to say because you’re all over 40. Some over 50.

Santa Inc tries too hard. It’s the same jargon we’ve heard for the past 20 years; women can do anything a man can do, diversity means everyone is a different color but we all think the same way so that’s what makes it nice, out with the old Rudolph the Red Nosed Reindeer and in with the little purple elf with the bad attitude.

Geezus, can’t we get a break? Can’t we just sit down and watch a TV show or a film that isn’t trying to sell us a message, but actually tries to entertain us? It’s so tiring that I do cringe. It’s so overdone that I feel the cringe through my whole body. It’s so obvious to everyone but the presenters that you’re trying so hard to remain relevant that it’s sad watching you fail.

The animation is good. The design was grotesque. Maybe even lazy. The main character Candy (played by Silverman) is an ugly purple color, with what looks like hair from a clog, and the grating unfriendly voice-over makes me wonder why she isn’t the villain. Santa Claus, (played by Seth Rogan) is an inheritor of the mantle who is going to need a successor.

Now since there’s never been a woman to hold the mantle of Santa Claus, the message is “isn’t it time we had a female Santa?” My answer is no. We don’t need to have a female take over a fantasy character that has always been a man. Why not just create your own character and let’s see if society will embrace her. We know it’s fiction, we know it’s fantasy, but it’s still an old tale that somehow became traditional and a lot of folks like their traditions.

People enjoy their traditions so much that they will hate any interference from someone who doesn’t appreciate the same tradition. Make your own traditions, I say, but don’t completely dump on one that people love. You’ve taken someone’s Jolly Ol’ Saint Nick and made him a dim-witted, pervy stoner. You can blame the dislike of this HBO series on whatever you want, but the reality is, is that you’ve abused something that brings families together.

It’s like Apple buying the rights of ‘Charlie Brown’ and all the ‘Peanuts’ characters and forcing people to pay for Apple TV just to enjoy it with their kids. I would hope readers will grasp this notion and stop pointing the finger at far-right extremism. It’s got nothing to do with politics, it’s about remembering what being a child was like and sharing this tiny thing with your own kids one day.