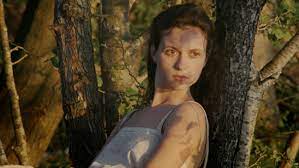 A slight but satisfying choice to open Director’s Fortnight at the Cannes Film Festival, Pietro Marcello’s “Scarlet” isn’t quite a fairy tale, although it certainly feels like one at times. For example, roughly midway through the movie, a woman who might be a witch meets the film’s fanciful young heroine, Juliette (Juliette Jouan), in the woods and predicts her fortune, explaining that one day this girl — who’s destined for greater things than the provincial Normandy farm where she’s dutifully passed her adolescence — will be whisked away by a ship flying scarlet sails.

Set in the years just after the Great War, this charming French-language fable — which hails from the celebrated Italian doc maker whose epic narrative debut, “Martin Eden,” was a critical success on the festival circuit just pre-COVID — is smaller, sweeter and more sensitive than Marcello’s earlier work. The movie’s sense of reality-based romance, wherein daydream believers make their own magic, is nicely captured in the opening quotation: “You can do so-called miracles with your own hands,” reads the epigraph, attributed to adventure novelist Alexander Grin, whose “Scarlet Sails” loosely inspired the script.

Applying Marcello’s unfussy nonfiction shooting style to a tender father-daughter story, “Scarlet” recalls the work of Jacques Demy (especially “Donkey Skin”). The same goes for Juliette’s propensity for song — she’s described as the only person in her otherwise mirthless village who still sings — even as the film’s grainy 16mm texture, mix of original and archival footage, and unforgettable ensemble of working-class faces fall more in line with Italian helmers who’ve come before (from De Sica to Pasolini).

It takes some time for Juliette to emerge as the main character; the film opens instead on her father, Raphaël (Raphaël Thiéry), a roughed-up ex-soldier who limps home on uneven legs to learn that the woman whose love got him through WWI was buried during his absence. In time, Raphaël will discover the upsetting circumstances of her death, but for the moment, his grief is acute enough without also having to hate the townspeople who disrespected her. Robbed of a proper reunion, the widower is left with only her infant daughter, Juliette, a responsibility he does not know how to handle.

Even so, Raphaël is a practical man with hands knotted by years of physical labor — the kind of detail one can’t fake, and which makes the casting of Thiéry such an authentic choice for the role. The actor, who appeared in Cannes with rustic curiosity “Staying Vertical,” comes across as a real-deal carpenter, who accepts the hospitality of widow Adeline (Noémie Lvovsky) in exchange for help around her farm. Marcello subtly conveys the touching connection between Juliette’s two guardians, even though precious few words are exchanged.

Raised by such a plain and unsophisticated pair as these, it’s surprising that Juliette should blossom into such a bright and clever young woman, and yet, Marcello substitutes ever more attractive actors to play her as the character grows up, even as the character remains naive to her power over men. In short, the notion that her interest in poetry, painting and music might carry her farther in life becomes the film’s raison d’être. At a certain point, the townspeople turn on Raphaël — not without reason, though one can hardly fault him for the decision that renders him an outcast — which makes things that much trickier for his daughter, who hardly has any friends to begin with.

It’s during this period that she makes the acquaintance of the witch (Yolande Moreau). Now, the word “witch” is thrown around quite a bit by suspicious male characters who seem ill-prepared to cope with independence of any kind among their womenfolk. Even Juliette is so accused when she favors the company of wild toads to the even slimier local creeps — pushy guys like Renaud (Ernst Umhauer). No wonder she’s ready to fall in love with the dashing pilot (Louis Garrel) who literally falls from the sky.

Jean crash-lands in a field and hears her singing from afar, seeking out the source. The scene in which Juliette emerges from the creek in a white gown and climbs up to sun-dry amid the branches of a large tree is easily the loveliest of this or any film in Cannes, and it’s handled with an uncommon respect for the character. Newcomer Jouan is quite the discovery: Comely ingenues are common enough in French cinema, but this role required a beauty with a mind of her own, as the director treats the crucial next few scenes — in which two would-be suitors pursue her affections with varying degrees of force — with attention to Juliette’s autonomy.

All throughout, Gabriel Yared’s suitably early-20th-century-sounding score reinforces the character’s independence, paving the way for a happy ending. In an early scene, Adeline sings and plays sorceress with the young girl (Suzanne Marquis plays the character at 5, Asia Bréchat at 10), telling Juliette that she sees power in her. Later, the witch doesn’t need a wand, but has only to whisper an idea in the right ear. Watch carefully for this moment, set at the town tavern. In the end, Juliette is not whisked away like some passive princess, but opts to leave, seeing scarlet sails as her way out, and the pilot as her prize.