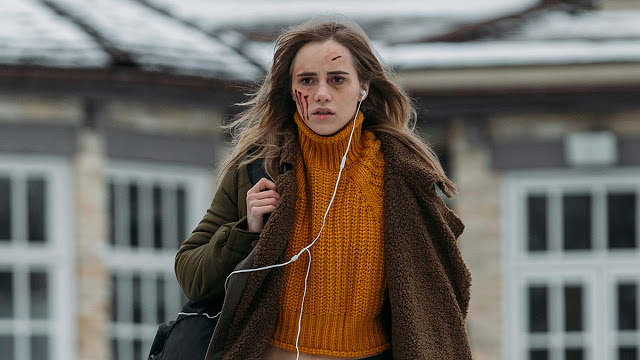 Camille, a young woman who arrives at the Edelvine Academy following one of the student’s untimely and violent death

It takes roughly five minutes to hate every character in Seance. Written and directed by Simon Barrett (evidently talented considering his credits on You’re Next and The Guest, two of the best horror films of their respective years released), the story centers on a group of high school seniors attending the all-girls Edelvine Academy who, while admittedly acting their age, enjoy playing pranks on one another and trying to summon spirits. Notably, they try to reach the spirit of a prior classmate who had committed suicide in her dorm bathroom. However, after the spooky aftermath is revealed to be another scheme by ringleader Alice (Inanna Sarkis), leaving Kerrie ((Megan Best) feeling bullied and frustrated, she runs off only to be found dead a few minutes later by what appears to be intentionally jumping out a window.

This unfortunate tragedy leaves an opening for enrollment that Camille Meadows (Suki Waterhouse playing one of the only likable characters here, asserting herself and standing her ground)) fills up, quickly becoming the new target of the clique’s cruel antics. Not every single member of the group is stuck-up, as student aid Helina (Ella-Rae Smith) shows Camille around the darkly lit Academy (it also feels like they are the only six students in the school, which adds to the scare factor but also occasionally becomes distracting), explaining that Alice and company have always been this way and that eventually, she will get used to it. They also discuss Kerrie’s tragic passing and how she was once closer to Helina before becoming more involved with mean-spirited shenanigans. The issue is that all of these people are frequently so nasty to one another; for the first act, you sit there wondering why they are friends in the first place.

The headmistress’s son Trevor (Seamus Patterson) seems to be the only guy on the property, serving as a repairman for anything that goes wrong and the various dorms. Speaking of the headmistress, she orders the teenagers to do some work around the library. Still, it’s not long before they get distracted and decide to do yet another seance, because apparently, these people are stupid and don’t learn. This time, they wish to speak to Kerrie and question if she took her own life.

Unsurprisingly, during the seance, Kerrie writes that she was indeed murdered, which springs forth the mystery aspect. Other students include scholarship-winning prize student Bethany (Madisen Beaty), Jade Michael’s Lenora (she decides to sneak off and hang out with an older man), and Yvonne (Stephanie Sy), all adding to the potential list of suspects. As you probably already guessed, more bodies began to pile up, lending a Scream vibe without any of the sharp writing. And for a while, Seance feels highly predictable as there appears to be only one natural, logical way for this to go.

This much can be said; half of the twist is an unexpected revelation. The issue is that the details surrounding the how and why are so laughably stupid and implausible that it would have been wiser to stay the path of logic. Simon Barrett is clearly hoping that the savagely cool violence throughout the climax masks the flawed ludicrous narrative (there’s even a terrific hand-to-hand fight scene), but it’s just another stumble in a movie that features consistently offputting characters (I seriously lost count of how many seances there are here). The final scene also concludes with a well-meaning moment that feels completely unearned, hoping for some other pats on the back.

Simon Barrett is also gifted when it comes to shorts (he’s had segments in both The ABCs of Death and V/H/S 1+2), and there’s definitely a sensation that Seance would have worked better vastly trimmed down getting to the skillfully crafted bloodshed as soon as possible. There’s also some decent sound design (one part involving distorted audio from speakers transitioning into silence temporarily made me question if the audio on my computer had malfunctioned), but a few clever sights and sounds aren’t enough to outweigh twists that try so hard to keep the viewer off-balance (there’s also a sliver of shock value thrown in for good measure) that they are a combination of senseless and ill-conceived.