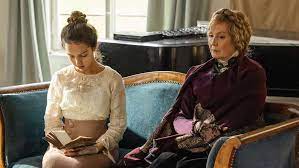 It’s been over a century since anyone’s adapted Wilkie Collins’ underrated “The New Magdalen” for the screen, and while Aurélia Georges’ cleverly modified version doesn’t resolve the novel’s inability to account for the protagonist’s mastery at disguising her working-class origins, its handsome imagery and Sabine Azéma’s adroit interpretation as the duped wealthy widow make “Secret Name” an attractive prospect for costume drama fans. The novel played on Victorian-era anxieties of class corruption with its story of a former prostitute assuming a dead high-bred woman’s identity only to discover that she wasn’t dead after all, but since subverting the social order no longer carries the same level of apprehension it did back then, the film foregrounds the ethical ramifications of impersonation and identity.

Georges (“The Girl and the River”) and her co-writer Maud Ameline seamlessly shift Collins’ action from the Franco-Prussian War to the First World War, an easy transition presumably made for the more fashionable (to today’s eyes) period setting. When Nélie Laborde (Lyna Khoudri, “Papicha,” “The French Dispatch”) loses her domestic service position, she’s forced to go back to streetwalking until a lesbian Red Cross recruiter eyes her up and suggests she become a nurse at the start of the War. In the Vosges forest her ambulance picks up Rose Juillet (Maud Wyler), a distressed Swiss gentlewoman heading northwest to Nancy, where she’ll become the ward of Eléonore de Lengwil (Azéma), the widow of Rose’s father’s friend.

A German artillery blast appears to kill Rose and as enemy troops move in, Nélie exchanges clothes with the body, claiming the woman’s identity when the invading army arrives; she’s allowed to pass through the lines since her assumed papers say she’s Swiss. In Nancy, she presents herself to the awaiting Madame de Lengwil, who notes the young woman’s reserved, noble comportment and has no reason to question her bona fides. Rose was to be Madame’s reader, a position worthy of a younger, impoverished social equal, and the book-loving Nélie effortlessly slips into the role. Eléonore’s nonconformist pastor nephew Julien Valence (Laurent Poitrenaux) is intrigued by the new attractive presence in his aunt’s house but becomes suspicious when the real Rose unexpectedly turns up accusing the woman who assumed her name to be a vile imposter.

Nélie’s sense of guilt is strong but so is her desire to hold on to a life she’s slipped into with consummate ease; the mutual bonds of affection with Madame de Lengwil are genuine, and until Rose turned up, her deception had no victim. Were she to admit her true identity, she may very well be forced to return to prostitution, or at least a life more befitting her station, and why should an accident of birth determine what avenues are available as an adult?

The script ignores how the illegitimate daughter of a washerwoman who walked the streets (not even worked in a brothel) could pass as a member of the upper bourgeoisie — such deceptions are rarely sustainable given rigid European class hierarchies — and is more invested in the ethics of identity theft. Eléonore’s trust is put to the test, as is her previously unswerving conviction in the sanctity of one’s social station. The moral quandary for both is what is owed Rose, robbed of her birthright, her position supplanted by an imposter from the gutter. The novel makes more of this tension, playing on the anxieties of a reading public for whom class transgression was far more of a potent fear than it is now, and Nélie never slips, never shows even a hint of her background, as if her tough upbringing and early life remarkably left not a trace on her pure, pleasant mien.

“Secret Name” imposes a modern understanding of feminist solidarity, such as when Nélie assists a maid pregnant out of wedlock, which also deepens the heroine’s overall goodness — in the film her only flaw is not of birth but of deception. In every other way she’s a woman of intelligence and integrity, apparently untouched by her time as a sex worker, and while rising star Khoudri is a lovely, elegant presence, she’s not granted much room for depth. Azéma’s experienced mastery of character unearths more complexity, her consummate control of intonation and facial expression ensuring she’s the most riveting person on screen. Oddly the war barely intrudes on the idyllic life in the de Lengwil villa, though a female letter carrier hints at the period’s gender shifts.

As expected from a period drama, there’s a quiet, stately beauty to the visuals, with d.p. Jacques Girault (“Under the Concrete”) making especially good use of the villa interiors. Especially notable is the work of costume designer Agnès Noden, whose sensitivity to color, fabric and cut adds a higher level of appreciation.