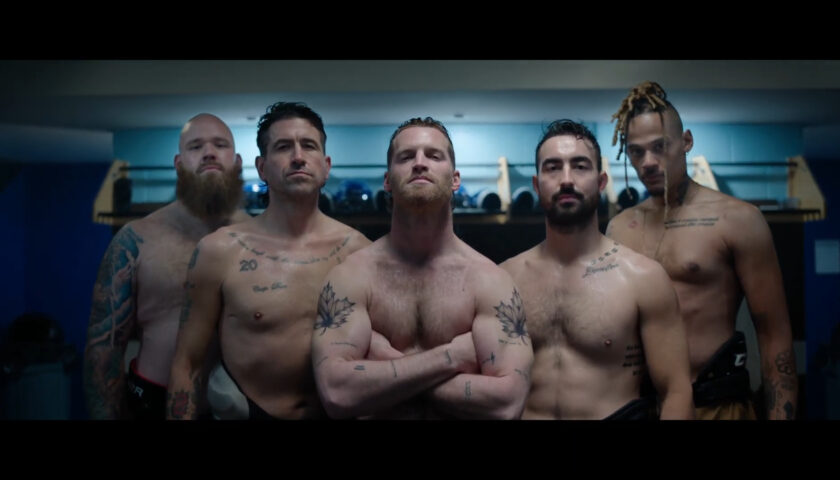 After making his debut as an off-screen character in the Canadian comedy series Letterkenny, the foul-mouthed ice hockey player Shoresy stars in his own spinoff series coming to Hulu this May. With Letterkenny series creator Jared Keeso both creating the spinoff and starring as the eponymous athlete, Shoresy has plenty of the same technical sensibilities as its predecessor but goes in a tonally different direction than Letterkenny. With that in mind, those coming to Shoresy looking for more of the same from Letterkenny may be disappointed, but those expecting an irreverent sports comedy in the vein of the cult comedy Slap Shot will be more fulfilled.

Shoresy follows the saga of the Sudsbury Bulldogs, a struggling minor league ice hockey team in the heart of Canada. With the Bulldogs having virtually no fans in the local community, the team owner Nat (Tasya Teles) hires Shoresy’s best friend Sanguinet (Harlan Blayne Kytwayhat) to serve as the Bulldogs’ new head coach, while an ensemble of lovable misfits joins Shoresy to turn the team’s fortunes around. Amidst all the juvenile antics undertaken by the team, Shoresy vows that the team will never endure another defeat on the ice in the ultimate wager on the Bulldogs’ future as they take on rivals around the league.

Given Shoresy’s role on Letterkenny, one might assume that the spinoff series would simply be a never-ending torrent of sex jokes. There certainly is no shortage of those over the course of the series, but Shoresy is quite a departure from the Letterkenny formula. There is a longer-form story at play in Shoresy compared to Letterkenny, which plays out like a series of vignettes. The core narrative also falls more prominently on Keeso’s shoulders as the titular protagonist; the rest of the ensemble gets plenty to do, but the show lives and dies by Shoresy himself.

Apart from Keeso, the real standouts in Shoresy’s cast are Teles, Kytwayhat, Blair Lamora, and Keilani Elizabeth Rose as the rest of the Bulldogs’ leadership. There is a certain cadence to the dialogue in Shoresy, and Keeso’s co-stars more than keep up with the rapid-fire delivery as they verbally spar with their hockey team. A significant portion of the main cast is made up of real-life hockey players with little to no prior acting experience, but they don’t glaringly stand out from their more established counterparts.

One of the big questions is if Shoresy is as funny as Letterkenny, and the short answer to that question is no, it isn’t. Shoresy has more than its fair share of comical moments, but it’s intent on telling an underdog sports story, with the laughs more as punctuation to scenes rather than what drives the narrative forward. There are laughs to be had, and most of the humor lands effectively, but Shoresy is less preoccupied with getting a chuckle than it is showing its cast rally together to craft a badass ice hockey team.

With much of the same Letterkenny crew developing Shoresy, the spinoff feels like a natural extension of the previously established Canadian comedy regarding visuals and vulgar comedy but is still very much its own thing. The show continues to showcase Keeso’s knack for slice of life comedy but also shows him and director Jacob Tierney veering into more ambitious storytelling, with genuinely engaging hockey sequences and a more cohesive narrative. Shoresy is a show that is perhaps best made to be binged over one or two viewings rather than in a standard weekly release, and, with its Hulu launch, the series is ready to expand what audiences can expect from the world of Letterkenny.