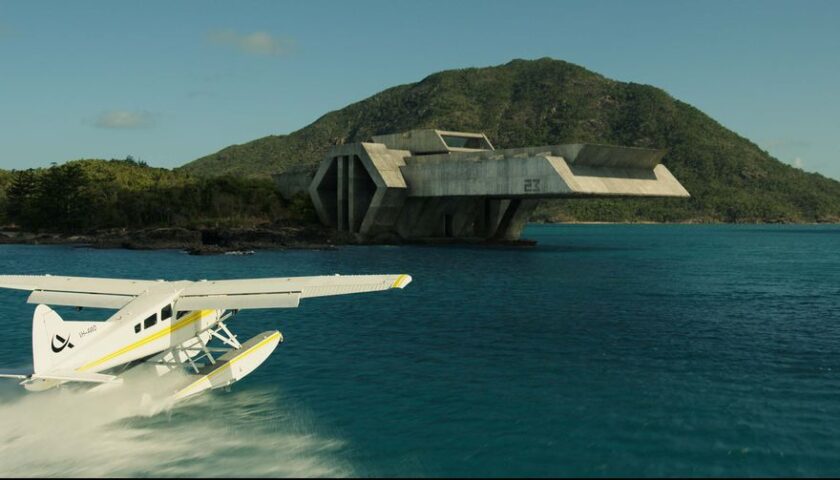 Steve Abnesti (Hemsworth) is a pharmaceutical science man developing little vials of colored liquid that can significantly manipulate or alter a person’s moods and emotions. The drugs are administered via little not particularly utopian battery-pack thingy at the base of the spine; one swipe of Steve’s phone and a body’s laughing euphorically at mass death, or overwhelmed with such love and lust it can’t help but schtup the living tar out of the other person in the room (hopefully who also is on the same drug; we don’t see it happen any other way, thankfully). Steve’s setup is like so: Big concrete bunker-base near the sea, which serves as residence and testing lab for himself, his assistant (Mark Paguio) and a bevy of convicted felons who’ve been offered snatches of freedom and some creature comforts in exchange for being guinea pigs. Good deal or Faustian pact? The former wouldn’t make for much of a movie now, would it?

Our protagonist is Jeff (Teller). We’re privy to his flashbacks, which heavily feature a drunken and fiery car wreck. There’s a scene in which he sits across from Heather (Tess Haubrich) in the experiment-o-lab. They’re asked to assess each other’s physical attractiveness. When they don’t say much, they get a dose of Verbaluce, and thus flow the superlatives. Then they get some Luvactin, which is followed by an instance of wild coitus. When Steve dials down the juice, his subjects cease their postcoital spooning and, feeling awkward and embarrassed, quickly get dressed. Jeff has a less fleeting, more authentic interest in fellow inmate Lizzy (Smollett), who’s a helluva cook and reciprocates some of his emotional affection, a situation that doesn’t at all seem ripe for exploitation by glib, amoral shitheads like, oh, say, Steve, right?

There’s two interesting hitches in this scenario. One, the experimentees can’t participate in Steve’s crazy scientist shit without consenting first. And two, same goes for some strange psychological game Steve sets up where he sets up two inmates Jeff once Luvactin’d real hard, and tells Jeff to choose which one gets a drug called Darkenfloxx. Jeff would rather nobody ever get Darkenfloxx, because he had it once and it really floxxes with you, putting you in an unholy traumatic state that’s a white-hot blend of pain, despair and rage. Why anyone would concoct such a drug is beyond me, but hey, I guess that’s why I’m not a scientist and just a film critic who’s about to kick this one in the ribs.

Oh, one more thing: Don’t bump the spine-box on the door jamb or anything if you don’t want your body to be flooded with enough of the ’floxx to make you go insane or Hulk out or whatever. You’d think that scientists in a state-of-the-art futuro-facility testing hyper-experimental drugs would have a failsafe on their thingamajigs, or gear that isn’t so susceptible to rudimentary accidental physical contact, but every Movie Plot needs its convenient Plot Hole, or else someone would have to come up with a clever idea to generate conflict instead of just being a monkey smashing a big dumb red button on the Screenplay-o-Matic.

Yet there’s something to Spiderhead, conceptually – it has a bunch of Philip K. Dick Lite ideas rattling around in its bucketheaded screenplay, most compellingly, the tangling of ethical concerns within scientific and punitive contexts. But Jeff’s psychological river runs shallow, and only the twittiest of twits wouldn’t suspect a smug and smarmy chode like Steve of nefarious scheming. He has a dozen arrows pointing at him saying VILLAIN – I mean, look at his concrete lair, and his nasty little concoctions, and his khaki floods with no socks, and propensity for buttery yacht rock, and he’s always smiling, a smile that you trust as far as a mouse fart will blow you across the room. It takes the film 90 minutes to crack open a philosophical walnut, which it quickly feeds to the nearest squirrel so it can undermine the seriousness of its implications by wrapping everything up with a loud, violent, quasi-comic conclusion riddled with grade-school-level irony and goofy soundtrack cues. I deep-sigh in this movie’s general direction.