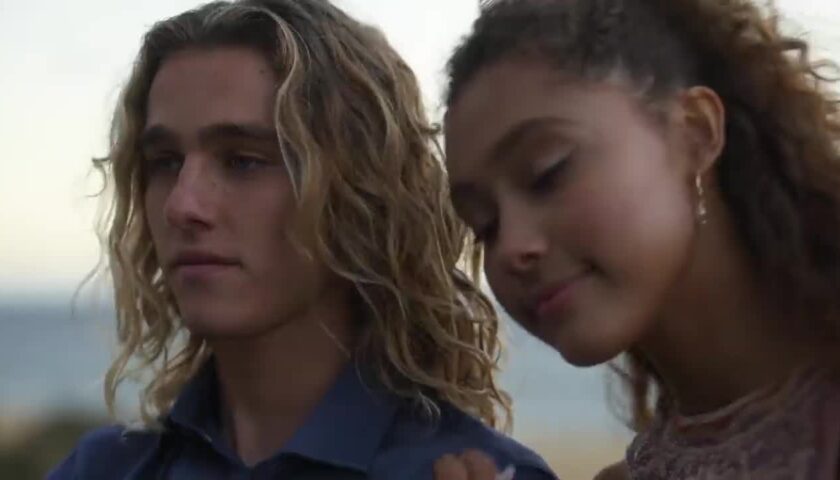 Netflix describes “Surviving Summer” as the story of a teenager who falls in love with a town and its people over the course of a summer. The first thought that came to our minds when we read this description was, “Here’s another one.” After 10 episodes, we conclude that, though we were not wrong, we were pleasantly surprised by the show’s authenticity.

In a world with a population of almost 8 billion, the retelling of stories has a certain value, with different versions of the same characters bringing a sense of comfort and relatability unique to every generation and demography. The only bone we have to pick with such retellings is the lack of effort in properly adapting them to the format. It’s OK to sell old wine in a new bottle as long as it stays faithful to the spirit. And we are glad that ‘Surviving Summer’ understood this assignment. There is an effortless quality to the show that makes it such an easy watch.

The story follows ‘Summer,’ whose mother needs to go to the Middle East for a job, so she leaves her to spend 6 weeks in Shorehaven, a beach town in Australia, with a friend of hers. Summer is a rebel with a golden heart. She plans on leaving the place immediately, but due to unavoidable circumstances, she ends up staying and eventually falls in love with the place and the people. The family that Summer stays with are old friends of her mother. The son, Ari, is a surfer who is getting back into the scene after being incapacitated in the hospital for a year following a shoulder injury. His parents are hesitant to let him participate in the upcoming surfing competitions as they are scared that he might be in danger again. The other prominent characters are Poppy, who is one of the main contenders for the surfing championship; Bodhi, who is an up-and-coming social media influencer; and finally, Marlon, who has a strained friendship with Ari. All summer, she makes friends with this group and gets involved in their lives and ambitions, all against the backdrop of surfing.

One of the first things we noticed about the show was its very excellent music and how seamlessly it fits into the screenplay. And despite knowing nothing about the sport, we can’t help but think that it did justice to surfing and properly represented the competitive nature of it. The investment of an audience in the sport that any movie or show is based on or centered around makes a huge difference to the likeability of the content. “Surviving Summer” had quite a masterful balance between the integration of surfing into the storyline without overdoing it with the details, which is exactly what makes even the most non-sporty viewer imagine themselves on a surfboard riding the waves themselves.

The characters of the show were also extremely likable and relatable. Ari, the former pro-surfer who was struggling to move on from his past while dealing with the burden it placed on him, was literally every person who has suffered a setback in life. Bodhi, trying to find her place in the world while making sure everyone around her was happy, had our hearts aching at times. While it is easy to dismiss Marlon as a selfish and insecure jerk, once we understand his motivations that stemmed from guilt and lack of confidence, we can’t help thinking how there is a little bit of Marlon in each of us. Poppy, the responsible champion trying to rediscover her love for surfing amidst her ambitions for the championship, was probably our favorite character. Their strength lies in the fact that, despite their cliched conceptualization, they are far from being one-dimensional. Each one of them has a personality and a story arc independent of just furthering the protagonist’s journey.

Lately, with a lot of the OTT content, we have started to feel as if the stories are being forced to fit into the number of episodes, resulting in them feeling either rushed or just plain choppy. So when we saw that there were 10 episodes of what we initially thought was an overdone story, there was an audible sigh of exasperation. But for once, we were happy to be wrong. The number of episodes was just right for the length and the flow of the show, with not a single scene or subplot feeling out of place. This is quite an achievement for OTT content in recent times.

Probably the only negative thing we can say about ‘Surviving Summer’ is that perfect doesn’t mean exceptional. It all boils down to the standards of judgment of good content. When the makers of a movie or a show promise entertainment to the viewer in exchange for a few hours of their time, a promise is made, and it is only ethical to keep it. This is the argument that justifies the right to criticism of art, no matter how hard someone has worked on it. The story needs to be engaging. We need to like or at least be entertained by the characters. The music must not be jarring to the ears or out of place in the story. The length of the content should align with the actual substance of the story. These requirements are literally basic. And that is the thing with ‘Surviving Summer’-it is a basic show that shines mainly due to the comparison to its lackluster companions on the platform. Had there been better executions of the attempts at the ‘city girl falling in love with the small town’ storylines in the past, the show would probably not have been made, because it offers very little in the way of something new. So it is fair to say that our problem is not with this particular show but mediocrity in general, which has really lowered the bar of what can be called “good content.”

“Surviving Summer” is a good show. The actions of the characters are believable, and we can see parts of ourselves reflected in them. The screenplay is easy on the eyes, and we actually enjoy the shots of the characters surfing on the waves, in the way that they make us want to do the same. There is not a single moment when you feel that the story might be dragging itself through the narrative, and it has a deceptively binge-able quality, which is one of the best things for content in today’s day and age. We would recommend this show if you want something light and nice to watch, with emotions that can be empathized with without them actually pulling at our heartstrings. The ending is heartwarming in the way that makes the adage “All is well” feel realistic. It’s about the love of the family we have and the one we choose and their place in our lives, a concept that cuts across genres. To conclude, we liked what we watched, but we believe that there should be better content to watch as well. Until then, “Surviving Summer” will remain a nice way to spend a leisurely weekend in front of our televisions.