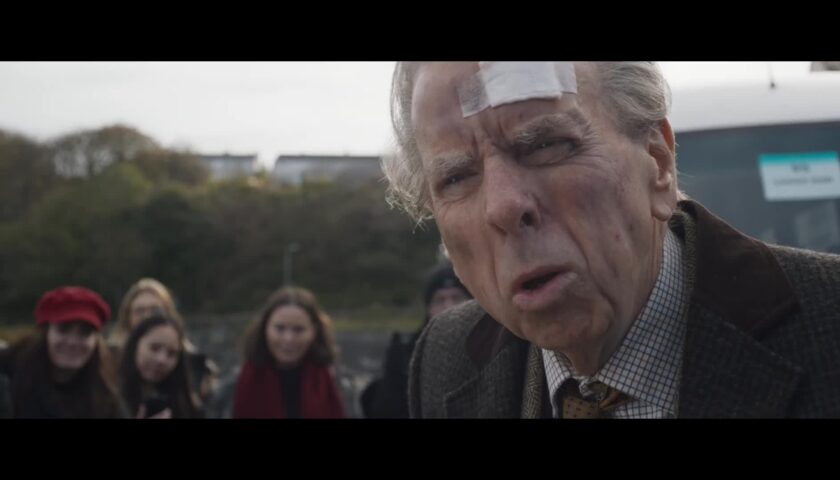 In its constant quest to update web content, Netflix has released The Last Bus, a children’s fantasy sci-fi drama dealing with situations encountered more than once in films, TV, and children’s books.

The Last Bus deals with a group of children, the only surviving humans, on a journey to find a genius billionaire eco-scientist who invented pods that apparently vaporize humans. In a typical children’s fantasy book manner, they survive, travel, and bond in their quest to find the billionaire and save the earth. But there are unforeseen twists along the way. Releasing on April 1, 2022, this TV series has ten episodes of 30-40 minutes. All of them will be dropped together.

The premise of The Last Bus is not something that sets it apart. From a mellow start with character introduction and recurring mention of a certain Dalton Monkhouse (Robert Sheehan), the show takes a very quick detour to a billionaire eco-scientist vaporizing humans with flying pods, which he calls genie pods.

The only survivors are a group of misfit children between the ages of 12 and 16, who then make it their objective to survive. All this is followed by various attacks, challenges, and evasions as the group of kids deals with the crisis while formulating a survival plan.

Despite a drop in tempo in the middle of the series, the beautiful visuals and sincere acting from the youngsters continue to make it worth the time. There are a few crises that may be deemed unnecessary, but may be very enjoyable to children and young adults.

In almost a sci-fi novel manner, the tale unfolds, and bonds of love and friendship are forged. Despite its simple narrative and a fantastical setting, the creators don’t shy away from complicated character arcs. Even the supervillain, per se, is logical in an almost MARVEL-esque way.

It is impressive to see shows increasingly embracing gray characters instead of mindless villains who only seek destruction. This is revealed at the very end, which is also ground for other twists. These twists set the narrative of the show apart. Another great tactic by the showrunners is leaving the ending unresolved. This both deviates the plot from conventional narratives and sets it up for a sequel.

The episodes are engaging in themselves. There are rarely dull moments. The credit for this goes to a very optimistic and sincere script. The pacing, though shaky at times, is never dragged. The acting by such young talents was also incredible. It is convincing and realistic.

The camera and VFX work flawlessly. Given Netflix’s production style, this is not a huge surprise. But some episodes are spellbinding because of their visuals alone. The seventh episode deserves a special mention for its use of lights and colors. It is helped by good sound design and an excellent mise-en-scene.

In short, it is not Mindhunter, but neither does it try to be. For what it is, it’s neat, honest, and fun. The Last Bus is a great watch for younger children and is engaging enough to keep adults hooked. It will make for a decent weekend binge.