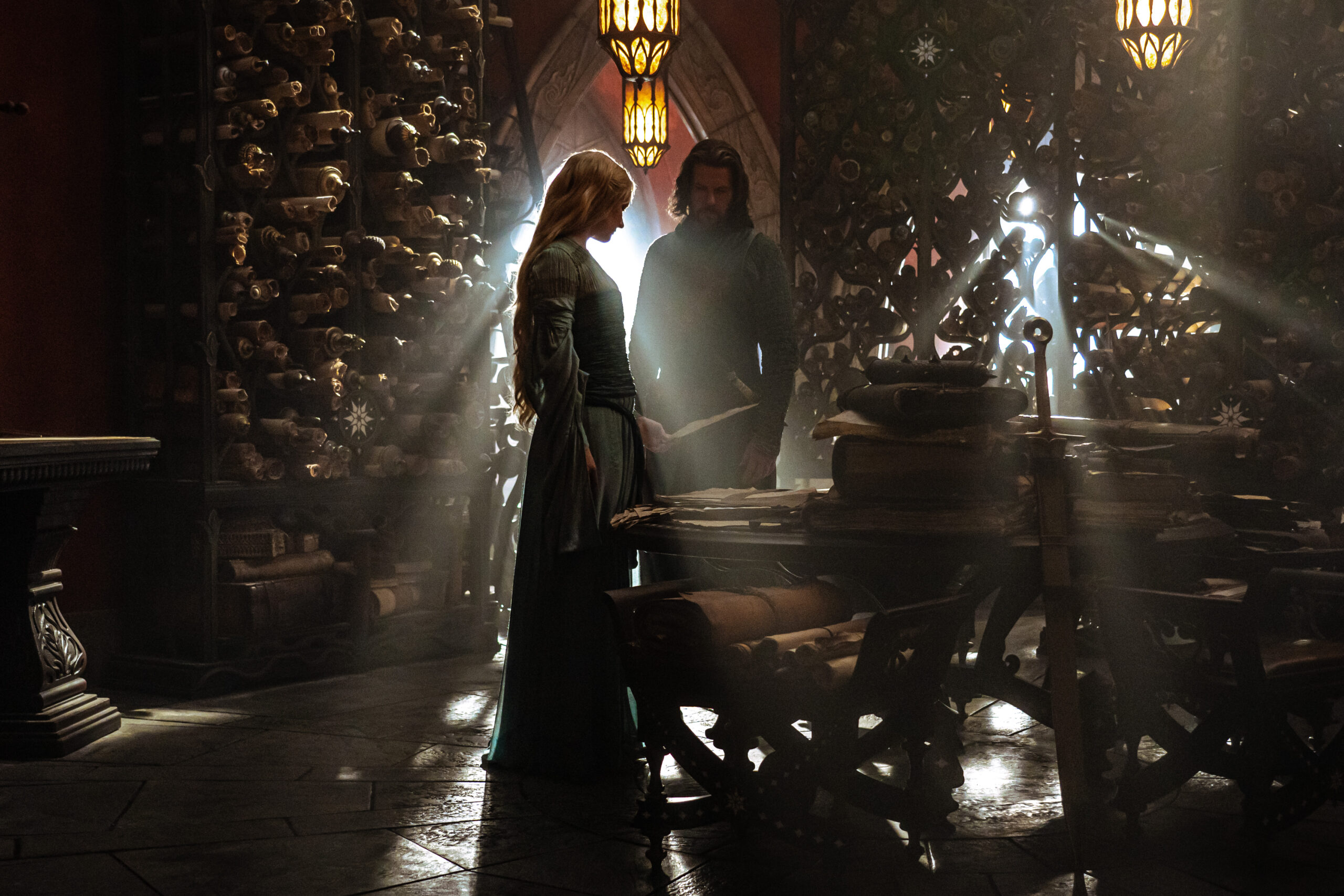 Even without its search-engine optimized, memory-proof title, “The Lord of the Rings: The Rings of Power” is built to evoke Peter Jackson’s blockbuster trilogy — the first one, of course. Trumpets blare over sweeping green fields, cascading waterfalls, and towering castles built between mountaintops. Shimmering light reflects from every corner of a world too beautiful to be our own, yet only removed by choice inklings of imagination (and loads of CGI). Elf ears sharpen to a point. Overlooked trinkets conceal dark magic. Orcs spit and howl like the vile monsters they are, but — befitting the humans playing them, rather than “The Hobbit’s” unholy digital husks — each has a name.

This is “Lord of the Rings,” after all. Iconography is what Amazon paid for (and paid handsomely). Yet, without getting into spoilers, it’s not just the look of Middle Earth that’s been cleanly mapped from movies to TV; structure and character arcs are ported over, as well. Young hobbits embark on a dangerous adventure. Royalty must be drawn out. A dark lord looms. Supporting roles from the films are even given an early spotlight (namely, Cate Blanchett’s Galadriel and Hugo Weaving’s Elrond, albeit with new performers in each part). The premiere episode alone, while tight-as-a-drum formally, goes beyond borrowing a few classic storytelling techniques; it evokes so many specific callbacks to “The Fellowship of the Ring,” Jackson’s name deserves a slot in the credits.

But “The Rings of Power” is not a remake of the movies or even a traditional prequel, a la Jackson’s own return trip to J.R.R. Tolkien territory. The series is based on the author’s appendices to “The Lord of the Rings” and set in the Second Age of Middle Earth, thousands of years before Frodo or Samwise mosey into the Shire. Showrunners and executive producers J.D. Payne and Patrick McKay developed their own story, inspired by Tolkien’s detailed history, and whether their project is merely indebted to the past or reverse-engineered to echo dependable beats, what’s needed to set the series apart is the same: a pulse of its own.

“The Lord of the Rings: The Rings of Power” flutters to life in bursts, offering reason enough to believe, with time to play out its own story and optimize its own strengths, the Prime Video creation could leave its own gleaming mark on J.R.R. Tolkien’s still-expanding universe. Genuine chemistry draws sparks of humor and heartache. Sizable set pieces house indisputably epic battles. And yes, the grandeur on display is almost too much — all those soaring shots of fantastical cities and glistening scenery routine enough to feel, well, routine. Still, the stately show’s main hurdle is the same faced by many of the streaming era’s ambitious sequels, prequels, and spin-offs: over-familiarity absent any real risk. Investing a boatload of cash isn’t the same as investing beliefs, predilections, and sense of humanity. It’s rather simple to satisfy the masses with a nostalgic game of connect the dots; it’s much harder to forge a ring of one’s own worth admiring.

Already dubbed the most expensive TV show ever made, the series wastes little time before showing off what half-a-billion can buy. Similar to “Fellowship’s” prologue, “The Rings of Power” introduces its impending journey with a flashback. Hundreds of years prior, the free armies of the world rallied together to fight Morgoth, an unthinkable evil intent on world domination. The conflict lasted centuries. The elves, immortal beings who “had no word for death,” learned the hard way, and none took the lesson to heart more so than Galadriel (Morfydd Clark), a legendary commander who lost her brother to Morgoth’s feared lieutenant, Sauron. Swearing vengeance against the Dark Lord rising, she began a search for her missing opponent that lasted long enough to cast doubt on its purpose. Eventually, many come to believe Sauron is dead. Peace lasts long enough that it’s taken for granted. And while Galadriel remembers that “evil does not sleep — it waits,” her expedition lacks evidence to continue.

Related to her crusade, in one way or another, is an expansive cast spread across an oft-referenced map of inhabited lands. Elrond (Robert Aramayo) works as a political aid with close ties to Gil-Galad (Benjamin Walker), the elf’s High King. At his leader’s request, Elrond ventures out to visit his old friend Prince Durin IV (Owain Arthur), a dwarf living within a magnificent mountain, and the two soon recapture the prickly dwarf/elf dynamic first originated (and made oh so delightful) by Gimli and Legolas. (Durin, it must be said, almost immediately “has my axe.”) That being said, the Legolas surrogate starts out in Middle Earth, as the elf soldier Arondir (Ismael Cruz Córdova) is stationed in the Southlands to look over a city of men. While there’s no love lost between the rulers and the ruled, forbidden love sparks between Arondir and Bronwyn (Nazanin Boniadi), a human healer with a son prone to bad choices.

Further humans of varying stature lie beyond the sea, but hiding somewhere among the sweeping plains is Elanor Brandyfoot (Markella Kavenagh), an adventurous young Harfoot (a type of Hobbit) who survives along with her family and best friend Poppy Proudfellow (Megan Richards) by staying out of sight and sticking together. “Nobody goes off trail, and nobody walks alone,” her mother reminds the curious kiddo. “[But] haven’t you ever wondered what else is out there?” Nori replies, desperation straining her voice. “I can’t help but feel there are wonders in this world beyond our wonder.”

Might she soon find out? Does her restlessness call to mind a young Bilbo, her wide eyes reminiscent of Frodo’s? Within the 63-minute premiere, “The Rings of Power” introduces a resurgent foe once believed to be defeated; a stalwart protector who refuses to forget the past; a hobbit on a long walk with a loyal friend, a surly dwarf, and a badass cloaked warrior. (Though that last little homage to another hooded bar patron serves as a welcome head-fake to the character’s true archetype.) Such direct comparisons to the films do “The Rings of Power” no favors, and its desire to stir up emotions tied to Tolkien’s most beloved adaptation can undermine the series’ own often-well-realized ambitions. The show’s grandest battle impresses more with scale than pacing or passion, but it surely would’ve played better had “The Two Towers” not been top of mind. Nothing can compare to Helm’s Deep, and rather than invite a no-win juxtaposition, why not lean into a last stand taken on its own terms?

The ultimate fate of “The Rings of Power” may lie in the balance between Elanor and Galadriel. Where the films centered the hobbits, the show emerges from an elf’s point of view, and such a seemingly minor shift in perspective soon proves quite telling. Frodo and Sam destroyed the one ring out of duty, but their only real desire was to go home and continue their happy, peaceful lives. Frodo finds joy sitting under a tree, reading a book, while Sam wants to raise a family and drink ale by a roaring fire. Galadriel’s motivation isn’t so simple. Elves’ lives stretch on, and her quest — to exterminate evil from the Earth — is fittingly expansive in scope. There is no ticking clock. There is only ground to cover. “The Rings of Power” follows her vision, setting its sights on an expanding universe and the many perils, people, and plots within. Ironically, what’s missing is what Jackson’s films always had: an appreciation of the little things that are incommensurately bright.