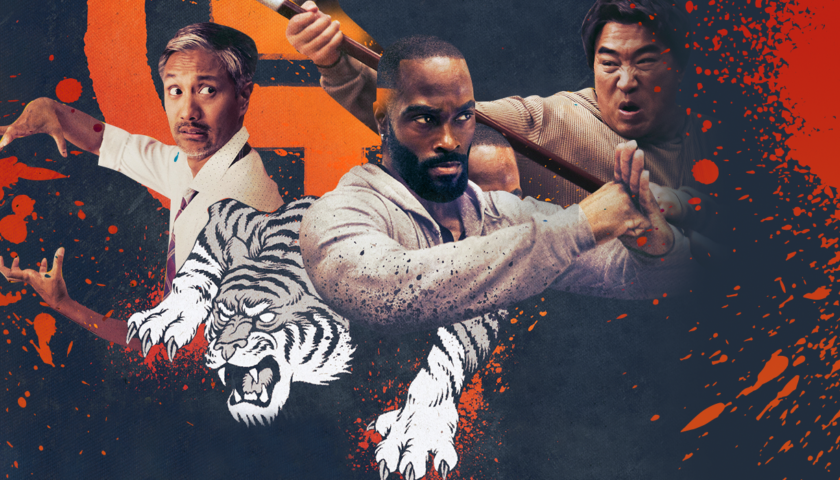 Three childhood Kung Fu prodigies have grown into washed-up, middle-aged men – now one kick away from pulling their hamstrings. But when their master is murdered, they must juggle their dead-end jobs, dad duties, and overcome old grudges to avenge his death.

After years of working as a stunt coordinator, editor, and helming his own short films, writer/director Quoc Bao Tran has now stepped into the arena with his electrifying film debut. The Paper Tigers, a wildly original action-comedy, is such a gobsmackingly impressive debut for Bao Tran as a filmmaker, and it was also one of the best films I saw at Fantasia Film Festival 2020. Hell, it’s one of the best action-comedies I’ve seen since… Game Night. Yeah, let’s go with Game Night.

The Paper Tigers is a surprisingly original narrative that took me completely by surprise. The lead characters, who were once known as The Three Tigers, are Danny (Alain Uy), Hing (Ron Yuan), and Jim (Mykel Shannon Jenkins). They are now washed-up middle-aged former martial artists who must reunite to avenge their old master’s death. Bao Tran takes a mature and funny approach with this premise and spins it to be a fresh underdog story. Uy, Yuan, and Jenkins deliver such lively performances that help carry the film’s fast and energetic pace along with its overarching charm and heart. These characters might’ve gotten older, but they share love, respect, and honor for their teacher and the art of kung fu, which is what made them friends in the first place.

Considering this is an indie comedy, part of what makes The Paper Tigers so excellent is Quoc Bao Tran’s skillful and resourceful direction. It doesn’t matter how ordinary some of the locations may be — whether it be a rooftop or an alleyway or a dojo — Bao Tran turns them into incredible set pieces. The level of hard work, effort, and passion glow from the opening sequence. The martial arts fights are so kinetic and fluid with their choreography and camerawork. The amount of effort that went into rehearsals and blocking long before the camera rolled is evident with those sequences. As far as filmmaking goes, The Paper Tigers is a better-crafted action movie than Mulan (2020), and that’s a near $200 million dollar budgeted movie. I hope Bao Tran is given the opportunity to helm even bigger action movies in the future because if he can create such a great film with a little over $1 million, imagine what he could do with $30 million. The last time I was this impressed by a filmmaker’s resourcefulness was Leigh Whannell’s Upgrade.

Besides contributing to the martial art sequences, the cinematography also helps complement the comedy. Some of the most laugh-out-loud moments stem from oners that add to the comedic timing during fight sequences. The fight choreography includes humorous moments of slapstick in order to balance the genres, just like the Kung Fu Panda movies. Heck, somebody calls one of the characters “Kung Fu Panda” in the film. The inspiration is all over the board and it is very much well-executed.

Bao Tran incorporates a ton of jokes and gags that take jabs at Western Kung Fu movies while also commenting on how America butchered Chinese phrases and stereotypes. You can tell most of the jokes came from Bao Tran’s personal experiences, along with his perception of Western culture, one example being a White dude named Carter (Matthew Page) who’s a riff on Ralph Macchio’s Karate Kid who just ends up becoming a dude who just appropriated Chinese culture and is totally oblivious to it. That character is such a riot and the relationship he shares with the trio adds to the hilarity as well.

While most of the comedy is funny, some of the jokes fall flat. The comic timing is impeccable for sure, but there are a few missteps here and there. The film bears a pretty underwhelming antagonist who doesn’t exhibit much of a personality as bold and vibrant as the rest of the cast. The antagonist is a young, swift, killing machine which is intimidating but he could’ve prospered from at least a hefty backstory if he was to pose as a genuine threat. Even the climatic final showdown is underwhelming in terms of location.

Nevertheless, this film is without a doubt one of the best movies of 2020 that poses as a weighty calling card for director Quoc Bao Tran. It’s hilarious, amazingly choreographed, and has such a huge heart. I’m eager to see the future of this movie and its creator.