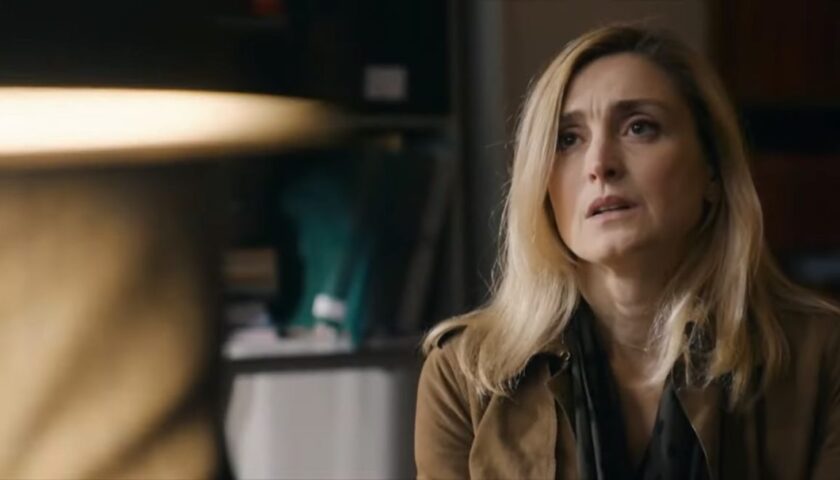 The night for Anya Berg (Eden Ducourant) seems to go well; she meets Damien (Charles Créhange) a guy she’s seen at university, and they go back to his place together. But interspersed in that are scenes of Anya traumatized. We then see pictures of Damien’s body, blood gushing out of it.

Anya’s family lives in Berlin. When her mother Hélène (Julie Gayet) gets a distressed call from Anya, saying the police are bringing her in for questioning about Damien’s murder, she hops a flight to Paris, telling her husband Matthias (Andreas Pietschmann) to stay behind with their son Lukas (Maxim Driesen) as he takes exams.

After trying to see Anya at the police station, Hélène goes to the office of Vincent Duc (Tomer Sisley), a former cop who is now a lawyer; they also used to be in a relationship before she left Paris for family reasons 25 years ago. He agrees to take Anya’s case; Hélène is adamant that Anya has nothing to do with Damien’s murder, and Anya’s story seems to back that up, as she claims Damien’s dealer came in and assaulted both of them.

But the more Vincent digs into the case, the more Anya’s story falls apart. Every time he finds out something that could give the cops a reason to look elsewhere, another piece of evidence pops up that further implicates Anya. For her part, Hélène finds out that Anya quit university months earlier and worked at a shelter for abused women, has been subletting her dorm to one of the women she met there and living out of her office at the shelter.

Written by Thomas Boullé and Carol Noble, The Perfect Mother (original title: Une mère parfaite) is a solid mystery that attempts to show how blind faith in anyone, even our own flesh and blood, isn’t always the right thing.

The way the first episode plays out is… well, we wouldn’t say it’s predictable, but the way Anya’s situation was first presented, with gaps and fragments, shows us that the story of her involvement in Damien’s death isn’t quite going to be the way she portrays it. Still, Ducourant does a good job of making Anya look like someone who was truly in the wrong place at the wrong time. But we also appreciated that the first episode revealed lies that Anya told the cops and Hélène that will start to shake the rock-solid belief in her daughter that Hélène has.

There are other elements that feel like they’re being purposely held back instead of just not being revealed due to the show’s storytelling structure. For instance, Lukas knows something about Anya that his parents don’t, something that’s relevant to the case, and when he tries to tell his dad about it, Matthias clumsily redirects the conversation. That was a maddening scene, mainly because it felt like a purposeful misdirect rather than something that comes up via Hélène and Vincent’s investigation or something equally natural.

We’re also not 100% sure where the backstory of why Hélène left Paris — and Vincent — a quarter century ago factors in here. She had a poor relationship with her mother, who didn’t even tell her that her father died until 10 days had passed, and she needed the distance for her mental health. Is this being revealed because she’s going to rekindle things with Vincent? Or is it just filler? The same goes with the seemingly complicated medical case in Berlin that Matthias is dealing with. They seem like extraneous details, but as the four-episode limited series goes on, they may become more relevant.