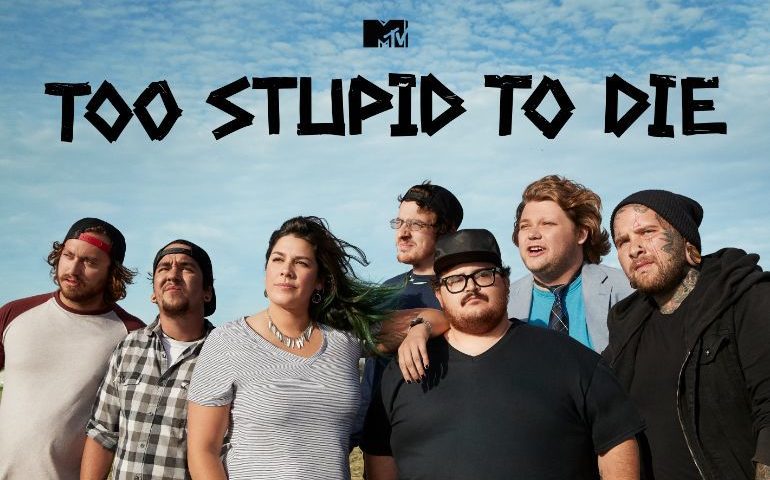 Review: In the tradition of MTV 2000s staple Jackass, which aired on Van Toffler’s watch, Too Stupid To Die is packed with bizarre pranks and outrageous stunts. Set deep in the heartland of Indiana, it features a group of backyard dare-devils who have nothing but time to kill, and that time is spent thinking of outlandish stunts and pranks. It is a story of have-nots with hearts bigger than brains who are coming to grips with what they do have, an unusual, but resilient friendship. Each half-hour episode has a theme in which the stunts will fall into – Dating, Cars, Unemployment.

Too Stupid To Die fits into MTV’s current programming strategy that focuses on coming-of-age docu series like Floribama Shore, Siesta Key and the return of a signature MTV show featuring young adults, Jersey Shore. It has helped fuel the network’s ratings growth, with MTV recently closing its third consecutive quarter of increases in its target 18-34 demographic, its best streak in 7 years.

“Where MTV is at its best is when we shine a spotlight on an amazing subculture and make that mass culture, where we celebrate great coming of age stories  — whether it’s parental and children relationships and an odd family like The Osbournes or whether it’s a wild pack of fun, crazy guys with Jackass or an amazing subculture that we all got to love and still love in Jersey Shore,”  said Chris McCarthy, president of MTV, VH1 and Logo, who had worked under Toffler before ascending to the top post. “When (head of unscripted) Nina Diaz and I came back to MTV last year, it was a very simple strategy which was to lean back into youth culture, lean back into unscripted and lean back into finding great new subcultures and coming of age stories with unique characters that you’ve never seen before. These guys are the perfect set of new subculture that we think are ready to be blown up in a bigger way.”

It wasn’t easy to get Too Stupid to Die, which was in a competitive situation, with McCarthy joking they had to “beg” Toffler for it. “We were dying to work with Van, and these kids are amazing.”

That is because Toffler had set his sights for his new company beyond linear TV. “I didn’t want to return to TV at all,” he said. “I think I had done it for a long enough period of time that I wanted to conquer some new platforms. At the company, we’re doing everything from three-minute series to 10-minute series to movies that go theatrically. So really the last place I was thinking that I would return was television. But to tell you the truth, I have such respect for Chris and his team. We grew up together, they’re wonderful and this show at its core feels so right for the network.”

Too Stupid To Die features a young Indiana man, Zach Holmes, who, along with his crew, performs and films outrageous stunts and pranks.

Holmes was discovered online by Gunpowder & Sky’s David Harris who had joined the company from MTV. Harris and his team went to Indiana and shot a 10-minute tape featuring Holmes perform stunts, interact with his family, including his grandma, and even visit the hospital where he is a regular customer thanks to his unusual hobby. (you can see a compilation of some of Holmes’ hijinks in a video below).

Word of the project got out, there was interest and Gunpowder & Sky was in talks with potential buyers when Toffler met with McCarthy and Amy Doyle, General Manager, MTV, VH1 and Logo, to discuss possible collaborations. That’s when Too Stupid To Die came up.

“It felt like serendipity that we shot the tape, a couple of weeks after we shot the tape I was with Chris and Amy and Chris instantly said, ‘Wow. This feels right. Let’s go do this together’,” Toffler said.

Producing the series for Gunpowder & Sky are Toffler and Floris Bauer, who launched the company in 2016, Harris, Holmes and Ross Breitenbach, alongside MTV’s internal producers Tiffany Williams and Ben Hurvitz  On the heels of Too Stupid to Die,Gunpowder & Sky is in talks with MTV on several other projects.

Since he took over the helm of MTV in late 2016, McCarthy has rebooted a number of classic series, including Jersey Shore, TRL and My Super Sweet Sixteen. Was there an idea to frame Too Stupid To Die as a new installment of MTV’s Jackass?

“Honestly we never considered it,” McCarthy said. “We’re certainly not shy of reboots when it makes sense; I think you see what’s happening in television today. In order to get the success that we’re having it’s a combination of remixing original IP and creating brand new IP. Obviously we have all the IP that Van created over the last 35 years to use, but we never really considered it for this because this group of guys and their families and the world that they live in is so unique and so specific to this younger generation that we wanted to create an entirely new world that was free of any limitations or any expectations but allowed these guys to live and breathe and become their own brand.”

Toffler himself has no desire to revisit the franchises he has helped create over his three decades at MTV. “In terms of reboots, I wasn’t a big reboot guy, I’m a very simple, non-reflective human,” he said in his signature self-deprecating style. “I always look to move forward. It’s why I launched a new company that is not tethered to a construct, a platform, a format, and I just want to keep breaking new ground, get into trouble, potentially get arrested, maybe get Chris arrested, and keep moving on.”

While Too Stupid To Die was bought by MTV about a year ago, the timing of its launch is fortuitous, coming off of the mega success of ABC’s Roseanne revival, which has underscored the untapped potential of telling stories of working-class Americans from the flyover states, something MTV previously explored with Buckwild, set in rural West Virginia.

“I think while this project on its own is amazing and these guys and the story and the town, things like Roseanne show that there is a thirst and a hunger and an underserved audience in middle America,” McCarthy said. “No one has done that in awhile — to tackle it from what does the Gen Z / Millennial version of that look like? As always, Van’s finger is well ahead of the pulse and we’re so thankful to be able to partner with him to expose these crazy, wild characters and to his point, hopefully we get arrested.”

During the lively —  sometimes a little wild — joint interview with Toffler and McCarthy, I asked Toffler about his assessment of MTV under his successor.

“This is like asking my dad how I’m doing in school,” he quipped. “Well, I feel like Chris is one of my children, and I love my children equally. He did such a great job at all the networks that he managed, MTVU2, VH1, and he feels like the right guy to shepherd MTV into the future, to tell you the truth. I think that he is multidimensional and understands that you have to be a slave to the consumer at MTV and go where they are. I think that the wonderful shackles of being in the linear TV business can be tough at times, and it’s not easy to move a big organization but Chris has done a really great job moving MTV to new places and all the brands that he’s managed. I couldn’t be prouder of him and the job he’s doing.”