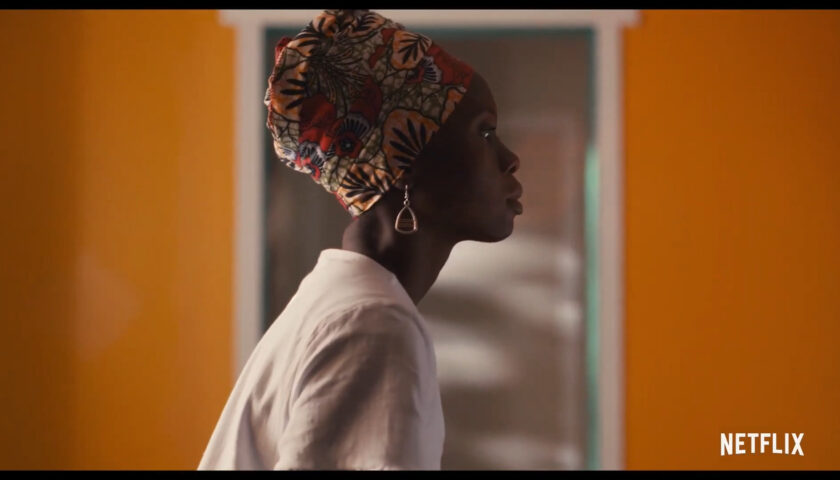 In a Rwanda marred with violence, death, and destruction, four women seek shelter in a storage basement under a kitchen and are forced to wage a war for life. Alanna Brown’s debut nudges the audience to seek hope and hang on to the ropes of resilience like how Annick (Eliane Umuhire), Jeanette (Charmaine Bingwa), Peyton (Ella Cannon) and Mutesi (Bola Koleosho) did when faced with genocide. The movie starts out with Annick reading from the pages of her journal recounting the days spent in the basement. “I can feel my spirit eager for the sleep”, she writes as she takes us back to the Rwanda of 1994.

Annick finds herself in the company of Mutesi, a Tutsi woman; Peyton, a white American visiting Rwanda on a Peace Corps-like mission; and Jeanette, a nun, in her house’s storage basement. For the next 98 minutes, the viewers are locked in with the women and allowed a breath of fresh air only when Francois, Annick’s husband, opens the door of the basement to provide ration supplies.

The camera work, though majorly consisting of medium close-up shots, never exhausts the audience thanks to the performances by the ensemble. However, as time passes in the basement, a sense of disconnect with the characters begin, as their character arcs and dialogues fall into stereotypes, with the plot functioning like a well-oiled machine.

Though death looms large over all the women in the basement, Annick is nurturing life in her womb, and such juxtapositions, though obvious, are heartwarming. Yet, the viewer isn’t given much to engage with.

At the very beginning, all four women share their troubles; while some have had miscarriages, others have been raped or have had to deal with the strife of their parents. The universality of pain in a woman’s existence seems to bind these women together in sisterhood. Such emotional unravelling is monologic and plays a part in dampening the plot.

Though Mutesi is troublesome in the beginning, she too is willed into submission by the virtue of her having been through the pain as a woman. She says she does not want to die with anger; the anger that she harbours for the men who have raped her and the women who stood in silence.

And from this moment on, the four women embark on a journey of resilience. They take joy in mundane things, from drawing portraits of one another, to learning to read English. All of them are enraptured with Seeds of Love, Trees of Peace, a children’s book that Peyton carries in her bag; it is never revealed why the women love the book. Annick goes on to name her child after the author of the book, but the story that inspired these women to go on in the face of crippling adversary remains alien to the audience.

The fleeting moments of love and intimacy that Annick shares with her husband Francois are marred with survival plans, news about the death of their neighbours, and discussions of food ration. They reaffirm that the greatest act of love in the face of death is to hope.

As days go on in the basement, the women begin to experience nightmares, hallucinations and suffocation. The horror continues and the women have to endure their life in the basement for 81 days.

The post-script of the movie notes that women in Rwanda, after the genocide, championed a campaign to heal the country. Today, Rwanda has the highest percentage of women appointed to government than any other nation in the world. From hidden basements to the parliament, women of Rwanada have claimed peace. The movie sows the seeds of a moving story on the Rwandan genocide, however, it forgets to sufficiently water them.