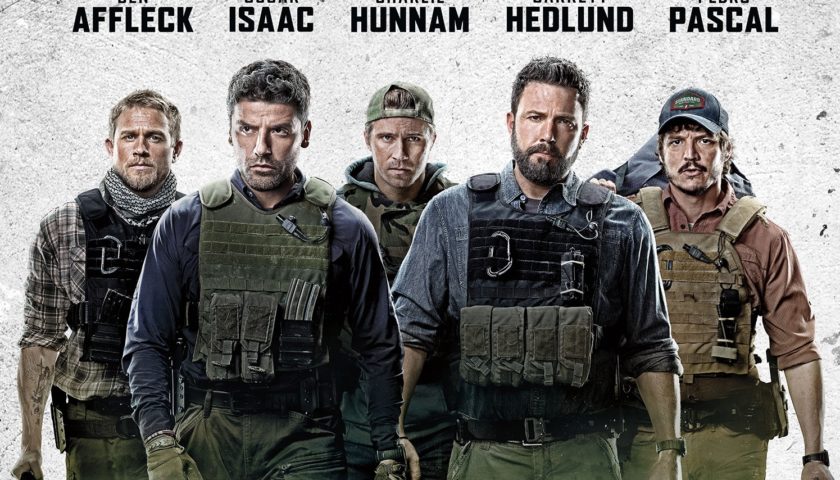 Review:Triple Frontier opens with Charlie Hunnam’s character, William “Ironhead” Miller, relaying a story to a group of soldiers on leave for post-traumatic stress by describing an incident while at a Publix when he started to choke out a man because he didn’t move his cart when asked. “The effects of committing extreme violence on other human beings are biological and physiological. That’s the price of being a warrior,” he says. The damage, though, has already been done, and plenty of soldiers are at home, struggling to pay their bills. So, a select few might as well have their “spoils of war” and eat them too.

Oscar Isaac stars as Santiago “Pope” Garcia, a former Special Forces operative that has been fighting the cartels behind enemy lines for three years and has had enough of all the red tape. He comes across some information from a local woman who happens to be his mole named Yovanna (The Belko Experiment’s Adria Arjona). She has unique knowledge of where the cartel keeps their money, deeply hidden in a dense jungle along a multi-border area that is virtually unpopulated (because these bad guys don’t trust banks; I mean, who does nowadays?) All she wants in return is safe passage for her and her brother out of the country.

After hooking up with William after one of his standard “pick-me-ups” recruiting speeches, Pope decides to get the band back together, almost a Dirty (Half)-Dozen of sorts. He meets up with Tom “Redfly” Davis (Ben Affleck) who is down on his luck, raising a teenage daughter, all while struggling to sell condos to make ends meet. They then visit William’s brother Ben (Mudbound’s Garrett Hedlund) prior to his underground mixed martial arts match (seriously) and their former pilot, Francisco “Catfish” Morales (Narcos’ Pedro Pascal), who has a newborn baby at home and recently lost his pilot’s license.

Pope gives them his best sales pitch, as he tries to win them over with the idea that they are doing it to make a change for the greater good. It just so happens there is $75 million in cartel money to be had at the end of this super-secret and illegal mercenary mission to take down a ruthless cartel led by a man named Lorea. Besides, there is no rule that says they shouldn’t get paid for the service that they are performing for the community.

Triple Frontier was directed by the criminally underappreciated and uniquely talented J.C. Chandor. Up to this point, Chandor was batting at 1000% with his first three features Margin Call, All is Lost, and his best film, AMost Violent Year. For a man who is known for tightly wound and absorbing dramas, it’s strange, to say the least, to make a generic by-the-numbers heist thriller cloaked in a false social message melodrama that’s much more a poor man’s Tears of the Sun than, say, Sicario. Even the script by Mark Boal follows the Hollywood playbook so faithfully that if you have seen any heist-thriller in the past 30 years you know exactly what is going to happen before it occurs, making for a ho-hum experience.

The film is well-made from a production value standpoint and should be considered a huge improvement over much of Netflix’s thriller filmography. Unfortunately, considering the resumes of the team involved, and for a film that was in development purgatory since 2011 (Tom Hanks and Kathryn Bigelow were attached, which would explain Mark Boal’s involvement), you must assume there had to be an original vision that was gutted along the way. Even more so when you consider Boal’s history of writing detailed, intelligent, gripping, and socially conscious films (The Hurt Locker, Zero Dark Thirty, Detroit).

Triple Frontier is the first blemish on the practically flawless resumes of Chandor and Boal (I’m not counting the latter’s story consult on After Earth). This is a standard by-the-numbers heist thriller that wants to act like it has much more on it mind that it does, while offering very little in terms of original thrills.