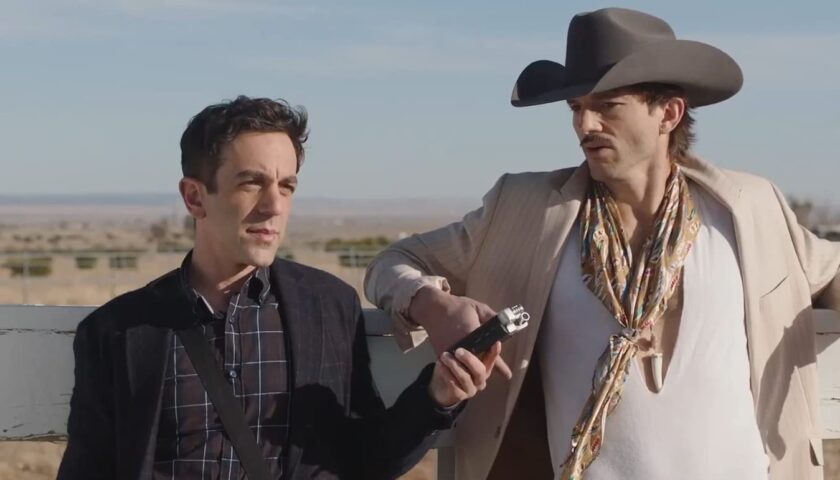 “Keep it simple, stupid” is something many a screenwriter should keep taped on her or his keyboard when conjuring up a movie. That’s particularly beneficial if you’re trafficking in screen thrillers. Judging from his movies, I’m guessing writer-director Hadi Hajaig (“Blue Iguana”) has “KISS” somewhere embellishing his laptop. His “Vengeance is Mine” is the very embodiment of that ethos. It opens with a little crook-on-crook mayhem, an armed London drug heist that turns bloody because it was always meant to. And it ends with a “Witness” stand-off in the farm country outside of the city. In between, Hajaig reminds us that film is, above all, a visual medium. Dialogue is spare, and there isn’t any for long stretches. Minutes and minutes pass before the film’s first words are uttered.

Whatever the body count of that opening shootout, there was one victim who wasn’t even there. Harry (Con O’Neill of “Chernobyl”) lives in the old church where he works as janitor and handyman. He is a tortured soul, awakening each day and confronting the urge to kill himself. He might do it with a chair whose leg he taped a knife to. He might manage it with just a jump from the choir loft. The church cook (Sarah-Jane Potts) could be someone he can talk to. But she’s in a support group there, dealing with her own issues.

And then he gets a tip and his life has a purpose. Flashbacks tell us Harry lost his wife and daughter in a hit-and-run accident. He got a look at the gang in the getaway car. Now, the private eye he hired long ago (Ricky Grover) has a lead. That at last gets Harry to talking. He stalks the people he recognizes (movies always exaggerate the human power of facial recognition). He hocks his late wife’s ring. We know what he’ll buy with that money.

Hajaig heeds my common complaint with these “Death Wish/Taken” clones. Harry has no “particular skills” for this business. He’s an inept stalker, an out-of-his-depth fighter, a shaky-handed shooter when the moment of truth comes. It doesn’t help that his wife pops up in distracting flashbacks in the middle of every confrontation. Hajaig keeps the story moving forward and limits the dialogue, beginning to end. Only one sentence matters. “They were my life.”

Extreme close-ups dominate the shot selection, music is limited to the flashbacks and the violence is visceral and in-your-face. Nothing goes according to Harry’s half-considered “plan” and sadism is the only motivating force of our villains, with Anton Saunders (of “Blue Iguana,” and TV’s “Luther” and “The Last Kingdom”) chewing up his scenes as the most psychotic of all. The thin story imposes a low ceiling on the film, although it breaks formula just enough to limit its predictability.

Hajaig gets a bit carried away with movie “shotgun physics,” the notion that a blast from a double-barrel can lift and hurl bulky men over distances that rival the Wright Brothers’ first flight. And despite its church setting, “Vengeance is Mine” doesn’t make any attempt at redemption or learning “vengeance is mine sayeth the Lord” is how that phrase ends. It’s still a solid B-movie revenge thriller, well-acted and tightly put-together, kept simple by design.