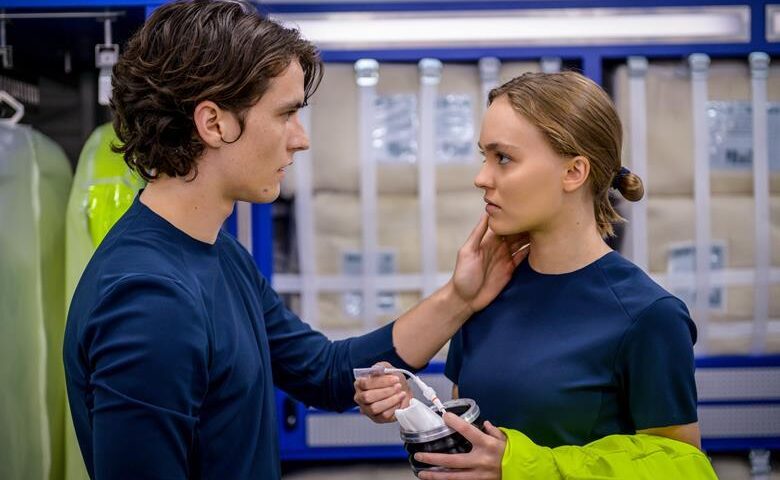 Claustrophobia and paranoia consume the characters in Voyagers, a derivative but efficient sci-fi thriller about a group of young people forced to fend for themselves on a ship hurtling through the galaxy. The Lord Of The Flies setup leads to predictable results, but writer-director Neil Burger wrings ample tension from his study of humanity’s self-destructive tendencies. And the sensation of being trapped in a confined space isn’t limited to those on screen — audiences should feel equally hemmed in by the filmmaker’s effective use of narrow corridors and the airless vastness of the cosmos, all of which heighten the anxiety in this modest genre offering.

Opening in US theatres on April 9 — a UK release is scheduled for July 2 — Voyagers will hope to capitalise on a marketplace without many blockbusters. A cast featuring Tye Sheridan, Lily-Rose Depp, Fionn Whitehead and Colin Farrell should draw some attention, and the film’s YA trappings could appeal to teen and twenty-something viewers, despite the picture’s overall sense of familiarity.

Voyagers takes place about 50 years in the future, when a group of men and women in their early 20s are travelling on a spaceship. Guided by mission commander and scientist Richard (Farrell), they’ve been specifically bred to embark on a decades-long journey in which their eventual grandchildren will colonise a distant planet in order to preserve the human race. But after an accident, the young people — including soft-spoken Christopher (Sheridan), resourceful Sela (Depp) and scheming Zac (Whitehead) — band together to decide who will become the leader, and whether or not they should even continue with this mission.

Burger (Limitless, Divergent) clearly has drawn inspiration from William Golding’s 1954 novel, moving the action from a deserted island to a spacecraft, where once again the young protagonists must try to form their own society — with disastrous consequences. Only near the end doesthe picture become sanctimonious, laying out its trite message about the importance of community and aspiring to our better natures. Before then, though, Voyagers is a sturdy B-movie in which Christopher and his cohorts learn that Richard is hiding something, leading to myriad plot complications.

None of what transpires is particularly surprising, but Burger and his cast execute the twists and turns skilfully. Farrell is quite good as the umpteenth seemingly benevolent father figure who is carrying dark secrets, while Sheridan conveys quiet strength as Christopher, who will find himself at odds with Zac, a young man who is so determined to lead that he will sow fear and distrust — especially when the voyagers begin to believe that a monstrous alien presence may have invaded their bodies. (As Zac, Whitehead possesses plenty of menacing-eyes intensity.)

There are fleeting references to questions of free will and toxic masculinity, but Voyagers works best when it’s simply orchestrating the dissolution of the crew, which will break up into factions, with one group hellbent on eliminating the other. Because there’s no escape from the ship — and they’ve lost contact with Earth — Christopher and Sela will need to outwit and outlast Zac and his followers. Working with a relatively low budget — the film is more of a grim chamber piece than a sci-fi spectacle — Burger slowly builds the queasy tension, the vessel becoming a battleground with only so much room to operate. In this regard, Scott Chambliss’ intentionally nondescript production design is a benefit — the blandness of the ship’s tight hallways and sterile rooms make the film’s principal setting resemble an eerily generic workspace or a high-tech prison.

On the whole, the characters aren’t particularly well-drawn. (Notably, the film’s two most prominent actresses, Depp and Chante Adams, are relegated to playing symbolic voices of reason amidst the stereotypically aggressive male behaviour.) And the story’s parallels to Trumpism and the rise of “fake news” are fairly obvious — most overtly in how Zac concocts lie after lie, bullying the crew into obeying him by projecting strength.

And yet, Voyagers’ stripped-down suspense and grounded performances give an old story a fresh resonance. Even in the future, when society can breed a race of young people whose sole purpose is to populate humanity’s next home, our base impulses — our desire to be selfish and to destroy those who get in our way — will still reign. This flawed thriller manages to tap into the sickening realisation that no matter where we travel in the universe, we always bring the worst parts of ourselves.