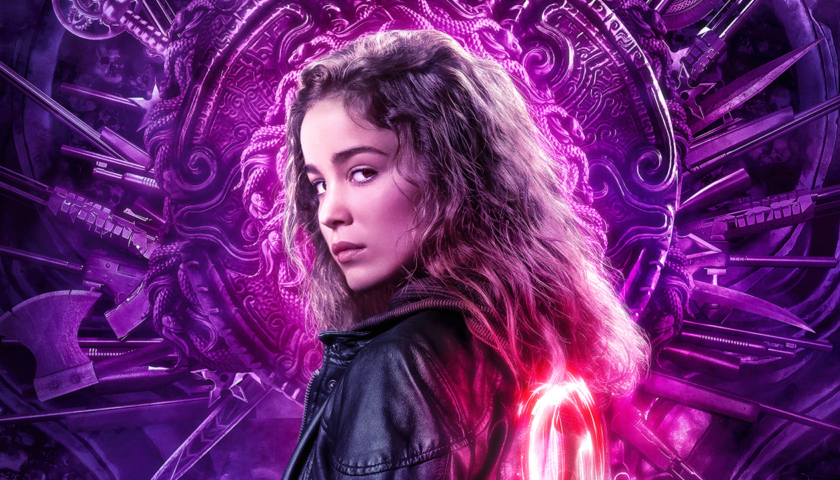 Manga fans rejoice! Warrior Nun has been adapted into a new ten-episode series as part of Netflix’s increased science fiction slate. The series is being brought to the small screen by creator and showrunner, Simon Barry, who is known for his breakout hit Canadian time travel series, Continuum, and who recently produced a short-lived, supernatural series for Syfy called Ghost Wars. He is joined on the production side by Terri Hughes Burton of The 100 and Eureka, and Amy Berg of Counterpart fame will be on board as a consulting producer.

The official synopsis reads: “Inspired by the manga novels, Warrior Nun revolves around a 19 year-old woman (Alba Baptista) who wakes up in a morgue with a new lease on life and a divine artifact embedded in her back. She discovers she is now part of an ancient order that has been tasked with fighting demons on Earth, and powerful forces representing both heaven and hell want to find and control her.“

Sylvia De Fanti (Medici) will join the cast of Warrior Nun as a series regular, reports Deadline. She will play Mother Superion, described as “responsible for training the Warrior Nuns, and while she might not give the orders, she’s the one who really runs the place. Having witnessed horrors as a child, she’s burdened with the guilt of the things she did and didn’t do while just trying to survive.”

Alba Baptista was recently cast as the show’s star, per Deadline. The Portuguese actress will play the title role, Ava, who is tasting freedom for the first time in her young life after being liberated from an abusive orphanage and a prison of her mind and body. As a result, she wants to experience everything at once, and she can be reckless in her ambition.

The cast also consists of the following:

Toya Turner (The Incredibles 2) will play Shotgun Mary, a woman loyal to the sisterhood more than the Church. She escaped family tragedy and was raised with religion but never really took to it fully. Naturally, she has a chip on her shoulder about loyalty. All the nuns know they can count on Mary to have their backs.

Tristan Ulloa (Snatch) will portray Father Vincent, the spiritual and strategic leader of the Order of the Cruciform Sword. Behind the Man-of-God persona, he presents a vulnerability that is both disarming and attractive. A veteran of making bad choices, putting on the collar and devoting himself to the Church was trading one addiction for another.

Thekla Reuten (Beat) will take the role of Jillian Salvius, CEO of a tech startup who has challenged the Vatican’s power directly by making a discovery that could make religion obsolete. They say there’s a fine line between genius and obsession.

Kristina Tonteri-Young (The Crocodile’s Gift) will play Sister Beatrice, a woman with a quiet Zen strength, Beatrice is a powerful Sister Warrior in her own right. The team’s resident strategist, Beatrice uses her reserved and intuitive nature to analyze everyone and everything around her.

Lorena Andrea (Jesters) will portray Sister Lilith, born into an elite family, she is a legacy Nun and committed to her beliefs, which causes her to overstep and over-reach in her entitlement.

Emilio Sakraya (Cold Feet) will play JC, the charismatic leader of a group of alluring petty criminals, running their game all over Europe, getting into trouble and “robbing the rich and giving to themselves.” While most members of the gang are aimless souls, JC has real ambition. He has big plans for his life, but for now, he is committed to living in the moment.

Inspired by the Warrior Nun Areala manga novels created by Ben Dunn, Warrior Nun revolves around a 19 year-old woman who wakes up in a morgue with a new lease on life and a divine artifact embedded in her back. She discovers she is now part of an ancient order that has been tasked with fighting demons on Earth, and powerful forces representing both heaven and hell want to find and control her.

The Warrior Nun American title began in 1994, and it ran for most of the following decade under different writers. The series was not without its controversy for its portrayal of religious iconography in a less than pious context, but many of the central storylines that revolve around a cold war of sorts between heaven and hell, if the Netflix series mines those arcs, seem ripe for the picking.

Whether or not the 19-year-old protagonist will be modeled directly after Sister Shannon Masters from the graphic novel seems in doubt, and the dropping of the name “Areala” and the lead character being named “Ava” may indicate a change from the original mythology involving the angelic origins of the warrior nun’s powers. However, the supernatural battle between good and evil that is at the story’s core should remain intact.