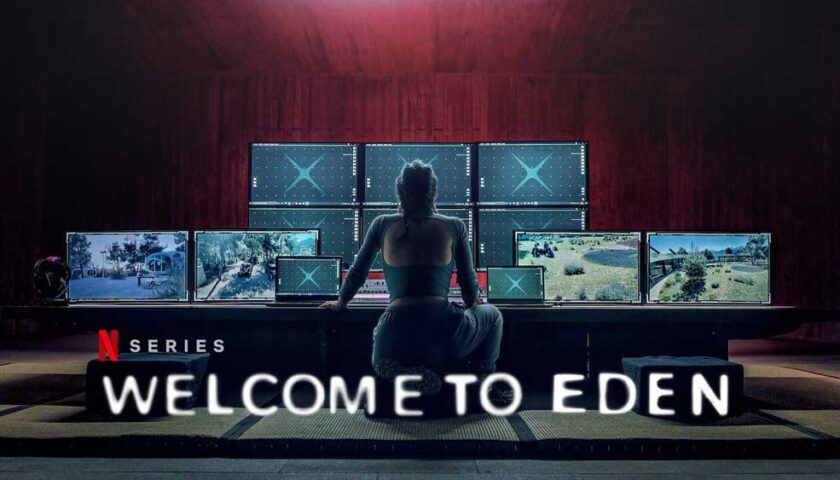 Two days earlier, Zoa, who lives in Barcelona and seems to be constantly lending money to her always-sick mother, gets a random text asking “Are you happy?” The text comes from a computer bank in a bunker; a woman named Astrid (Amaia Salamanca) wants to find the biggest influencers to invite to a Fyre-like party for her new product, Eden Blue. But here’s the twist: The five most worthy attendees, who are pre-picked by Astrid and her staff, aren’t going to be able to leave.

Zoa’s friend Judith convinces Zoa make her a plus-1 to this rager, despite Zoa signing a contract saying “no friends.” As they are led by a drone to a warehouse, they meet some of the other attendees: A goofy dude named Aldo (Albert Baró), a quiet, intelligent guy named Ibón (Diego Garisa), another guy named Charly (Tomy Aguilera) and África (Belinda Peregrín), a mega-influencer who comes to the beach party in sparkly high-heeled boots.

The party is the expected free-for-all, with people splitting off to have sex and other exploits. But there’s some dark stuff going on in the background, as Judith finds out when he sees one of the workers being attacked and drowned in a barrel of water. The five “chosen ones” get to try the Blue Eden drink, but little do they know that the drink is spiked, which ends up blocking out most of the memories from that night.

The five chosen ones wake up the next morning, completely hung over. No one else is on the island. A drone leads them to a compound, where Astrid, her husband Erik (Guillermo Pfening) and the workers from the party greet them.

There is a bit of intrigue in the first episode of Welcome To Eden (original title: Bienvenidos a Edén), mainly because we’re not sure what exactly Astrid’s intentions are with these five kids. We know that she picks kids whose home lives aren’t ideal; we see Ibón having a physical confrontation with his perpetually disappointed father, for instance.

But what is her ultimate goal? To give them a home she thinks is ideal? There seem to be some intense downsides to this life, especially the fact that she and her husband are keeping these kids on their compound against their will. We get the feeling that some of the kids will get Stockholm syndrome and decide to stay and some will try to find their way off the island.

Also, what’s the fate of Judith and the other partygoers? We know Judith was considered “expendable” by Astrid, as her wristband didn’t work, and then she saw something she shouldn’t have. But is her fate the only one we see?

Creators Joaquín Górriz and Guillermo López give us just enough in the first episode to hook us, but we’re expecting to see more insight into the lives of the five “chosen ones,” along with some of the other kids who ended up on the island to stay. For now, though, the show is off to a good start.