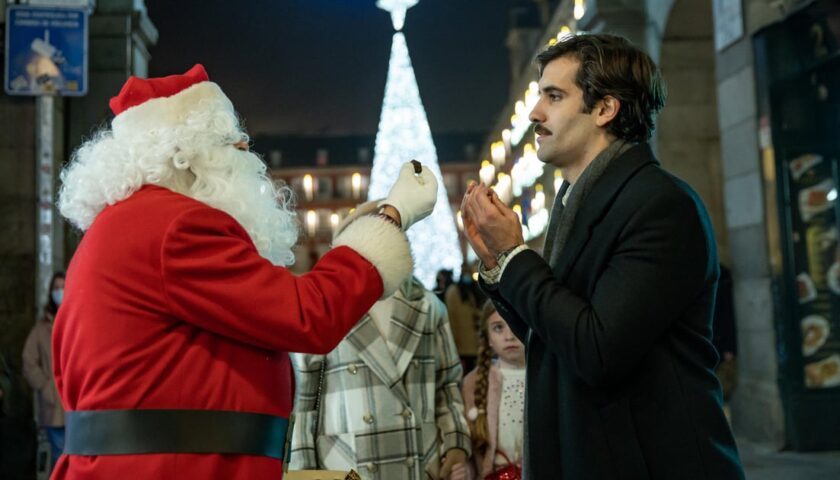 Christmas comedies aren’t exactly known for their nuanced storylines. For the most part, they usually try to bank on the holiday mood that undeniably takes hold of viewers during this season with a formulaic story all packed in a shiny Christmas-themed wrapping. 1000 Miles From Christmas is no different. The film is your usual run-of-the-mill Christmas comedy and leaves no stone unturned when it comes to including Christmas cliches.

Tamar Novas stars as Raul, a cynical auditor who hates Christmas and avoids it like the plague. The film goes out of its way to really hit home just how intense Raul’s hatred for the holiday exactly is. He not only ruins the holiday for other people but also rants about a man dressed as Santa to a little girl at an event. Raul’s character is meant to be that of a classic ‘grinch’, or a Christmas killjoy if you will.

So it only comes as a fitting punishment that the next audit he has to carry out is in a small wintery town that reeks of the Christmas spirit in every sense, from its snowy landscapes to its jolly residents to its main industry, a factory producing Christmas confectionery and sweets, which Raul has to audit. From then on every Christmas film trope in existence seems to get thrown your way as the story progresses. Every trope you can name, I can bet 1000 Miles From Christmas has it. And some of the over-the-top elements in the film make you wonder if the genre tries to stretch itself into fantasy at times.

Even the love story that forms the core of the film follows the same tried and tested formula. Raul meets Paula, a woman who is the complete opposite of everything he stands for, in the most disastrous of meet-cutes and the two cannot stand the sight of each other initially. Add to the mix a small town full of the quirkiest people imaginable, who are nice to a fault, have no concept of personal boundaries and are oblivious to Raul’s sarcasm and ridicule. And what’s a good Christmas story without its own villain? Paula’s childhood sweetheart does not disappoint in the role.

And the ending, which I do not want to give away in its entirety, is also something that viewers familiar with the genre can see coming from a mile away. In the end, the cynic does lose and Christmas emerges victorious, although even the loser’s life seems to change for the better because of it.

If you’re a fan of all things Christmas and enjoy seeing a whole film pumped with holiday film cliches, then 1000 Miles From Christmas will be perfect for you. This is not a film one should watch for its pragmatism or nuance, because such concepts are practically non-existent in this bizarre holiday comedy. And if nothing else, the stunning cinematography of the winter landscapes offers a visual treat that viewers can enjoy.