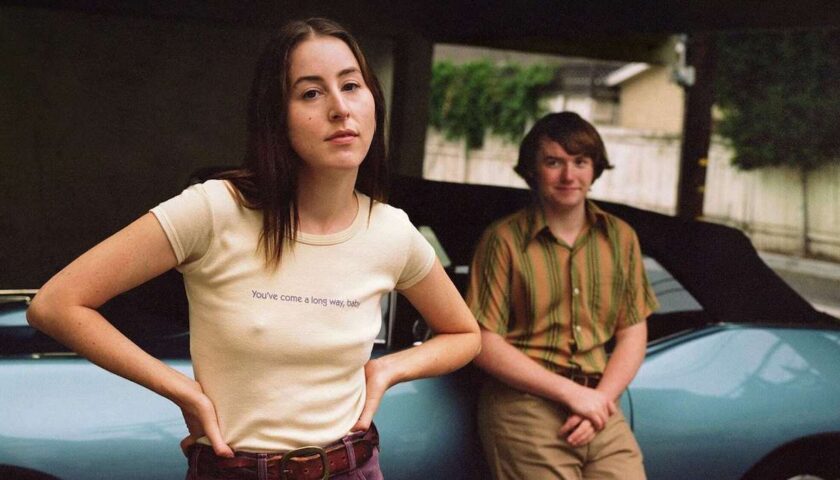 My initial impressions, aside from making a lot of hooting and hollering notices and bowing in a Wayne and Garth type of “we’re all not worthy” stance at a portrait of PT Anderson, who returns here to the Los Angeles of the 1970s again for a third time with a coming of age story about Alana (Haim) and Gary (Hoffman) and their misadventures and awkward but total connection to each other as friends and more, is that sometimes a film just needs to give me good characters, and this does this and then some.

By this I mean we have people, Alana and Gary in this case, who are immediately deeply felt and lived-in as these young people (though the age range makes that idea of ‘young’ into its own self-conscious and for Alana even neurotic beast), and the connection that grows between them as friends is that there is sentiment expressed (oh God oh goodness that scene with the two of them on the water-bed as he motions closer to her but then stops as “Let me Roll It” is more emotionally charged than any scene I’ve seen this year – and there’s strong competition) without it being sentimental.

This is hard to do, but what helps is we are “hanging out” with these people but they’re wants and desires are being figured out barely as they go along and the world around them is so rich and textured sometimes all they can do is run to keep up with things. They’re simply… compelling, fully heartfelt people, but PTA isn’t shy about showing their foibles. And around them are more “name” actors like Penn and Cooper and to a lesser extent Safdie and Waits who make immediate and strong impressions and yet also are people you get right away.

Which brings me to another impression…. this is maybe Anderson processing in his way things in the world over the past few years re: #metoo? Of course one can say “but hey the 1970s, you know,” but nearly every man who Alana meets – who may be more of the protagonist than Gary, I don’t know, it’s close maybe co-protagonists – is either a leering/lecherous creep or full of their own anxieties and issues. I’ve seen one or two things on social media criticizing Anderson about this possible/kinda sorta romance between this teen boy and 25 year old Alana (if she is that or rounding up), but I wonder if they’re seeing the same film I did because the film is really more about not even the romance side of it (though romance is laced throughout this) as it is that feeling when you’re a teen and you’re doing as much as you can to be an adult, but when you become an adult there is that temptation or even desire, usually if around the right group, to want to be young again. If you got to make it in the world, maybe it’s better to do it with someone who isn’t a (bleep) as a character describes men near the end.

As for the title? I think that’s Alana and Gary: they don’t go together, and yet they totally do. I loved this film and I look forward to seeing it a couple more times and diving in deeper on this. If by chance you’re near a major city playing this before Christmas, run – or steer your Empty-tank vehicle – to the theater to get absorbed in it all. And did I mention it’s PTA’s funniest since Boogie Nights?