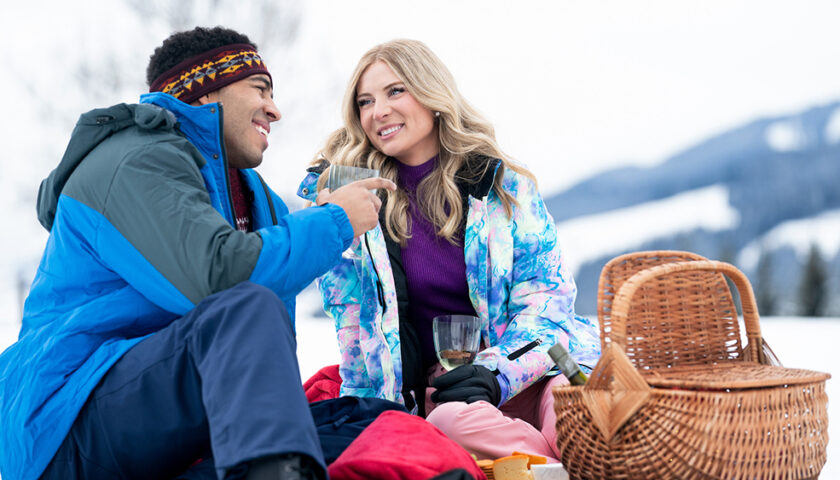 SPOILER ALERT: Do not read if you have not yet watched the first three episodes of “12 Dates of Christmas,” streaming now on HBO Max.

In 1965, Maria von Trapp (Julie Andrews) stepped into Schloss Leopoldskron in Salzburg, Austria and fell in love in “The Sound of Music.” Now, 55 years later, two new men and one woman hope to do the same in HBO Max’s “12 Dates of Christmas.”

The new reality competition series — which yes, really does film at that same estate in Austria — follows three single “leads” (Chad Savage; Christian Faith Fernandez, who goes by Faith in the show, and Garrett Marcantel) as they meet potential new relationships and go on the titular 12 dates, all with the goal of finding someone they want to bring home to their families during the holiday season.

The show doesn’t stop once that decision has been made, though: Instead, the first season will follow them back to their family’s home to see what a relationship outside of a picture-perfect winter wonderland would look like, leaving those leads to make the ultimate decision of moving forward with a long-term relationship (perhaps even a proposal) or going their separate ways.

“They’re such natural stakes that everybody related to that wanted to see that happen — see the cast interact with their family and then once that happened, the Christmas period was coming to an end, so we didn’t want to take them back to the castle, but we wanted to start to give them an insight into a slightly different world and moving their relationships, shifting into, ‘What happens now that Christmas is over?’” showrunner Sam Dean tells Variety.

Dean, who has a two-year overall deal with HBO Max, previously served as showrunner of Netflix’s “Love Is Blind,” another reality dating format that also put stock in seeing its new couples relating to each other in the real world. (Through her post at Kinetic Content she also worked on relationship reality series such as “Married at First Sight.”) “Love Is Blind” started with its singles all attempting to make deep connections with each other through conversation alone, as they were isolated in individual and physically confining pods, talking through walls. But “12 Dates of Christmas” revels in its grand landscape, more often than not attempting to create connections outdoors, amid physical activities including skiing and snowshoeing.

“We wanted a more romantic setting,” Dean says of “12 Dates of Christmas” over “Love is Blind.” She adds that in order to “evoke emotions you get at Christmas, we capture all of the tropes from holiday films. We wanted to create a world in a snow globe, and so we wanted to send them to a lovely winter wonderland. It’s so out of their comfort zone it really provides the cast with an escape to focus on just what they’re there to do: to find love and find connection. We wanted a rom-com [vibe], as opposed to a show about people hooking up.”

But it is still a reality dating show first and foremost — it is important for the leads to find out if they have chemistry with their dates, and the castle does have a hot tub. Physical affection does become apart of the show, but it was important for them to be a “family-friendly” show, Dean says, so the affection shown on-screen are respectful kisses, often starting with one person asking the other if he or she can kiss them before leaning in and doing so.

This “rom-com bubble” or “snow globe” vibe, as Dean alternatingly puts it, may transport its audience to seemingly simpler times. But it still does so through the modern lens by having comedian Natasha Rothwell serve as the narrator, offering “reactive instead of informative” commentary as a way to “wink to the audience” and also say things many audience members are also likely muttering to their device while watching.

Where the format is truly unique is that it introduces each of its leads to only one potential match at first. During a get-to-know-you-dinner between the trio, the wait staff reveals themselves to actually be their first dates. From there, each lead has ample one-on-one opportunity to get to know their potential match — until their next date comes gliding in during a masked party.

An essential trait in casting the leads, Dean says, was to find people who would be able to be “open-minded” and willing to share experiences with each new date walking in, even if they thought they were already finding something real with someone they met earlier. “We definitely wanted everybody to come in and have an equal opportunity to try and make a connection to the lead they were being matched with,” she says. “Bringing in other people really made Chad, Faith and Garrett assess if they were really with the right person for them.”

The dates, too, had to be open-minded about the experience. They weren’t told the “exact scope” of the show, such as the number of people who had been dates before them, prior to entering, Dean says. “Some elements were kept from them so we could keep the element of surprise and mystery.”

“Long questionnaires” about what each person was looking for in a relationship, as well as specifically in a romantic partner, were a big part of the casting process, says Dean, because they wanted to focus on finding people with those “characteristics and attributes.” Too narrow a focus could prove hard to actually find people that fit the build, so to speak, and who were willing to come on a reality dating show.

Chad and Faith met each other before anyone else — even before they met Garrett — and formed an immediate attraction that Dean says the producers certainly didn’t plan for but weren’t entirely surprised by. “As we all know, especially when you’re young, forbidden fruit can be especially alluring,” she says. If they had pushed all of their dates aside to only build a relationship with each other, “it could have changed the series,” she says.

Similarly, given the amount of time the dates spend with each other, Dean knew it wouldn’t be out of the question for some of them to form romantic connections, as well. While the team behind the show “spent a long time during casting really trying to focus on areas of compatibility between the leads and the people we wanted to bring into the castle,” she says, the one thing all of us know from just being alive and dating and having relationships is on paper people can be perfect for somebody else but you can’t really account for that magic that may happen.”

Chad and Faith are looking for heterosexual relationships, while Garrett hopes to bring a boyfriend home to meet his folks — not just for the first time at the holidays, but for the first time ever. This season, therefore, Dean say, they focused on casting dates who would match one specific lead, but one area Dean says they might explore in potential future seasons is including more romantically fluid people in the cast to see where sparks fly overall.

“We knew we really wanted a diverse cast and to represent the LGBTQ+ community. What we didn’t know when we were first going into it was specifically including a gay guy. That came more from exploring our characters and looking into the possible compatible matches that we believed would set somebody up for success,” Dean says.